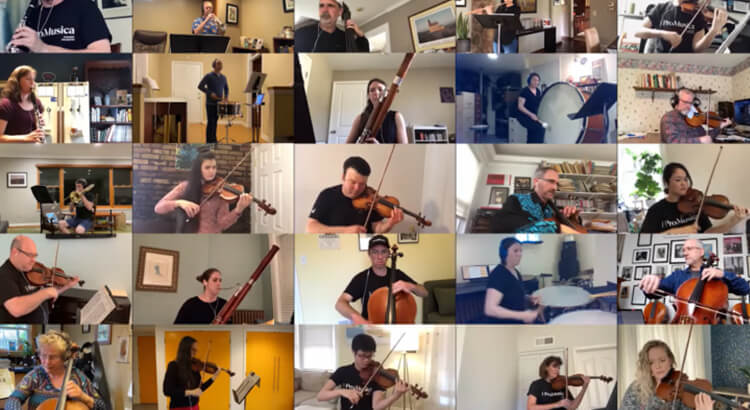 Members of the ProMusica Chamber Orchestra give a virtual performance as the conclusion to their 2019-2020 season. Screenshot from ProMusica.
ShareTweet

As an industry with one of the highest unemployment rates in the state, arts organizations are struggling to cover the significant economic losses the coronavirus pandemic caused.

In a pandemic impact report, the Ohio Citizens for the Arts asked members where they stood financially following restrictions and closures caused by the spread of COVID-19 through the state. Members of the OCA include the Columbus Association for the Performing Arts, BalletMet, the Great Lakes Theater and the Zanesville Museum of Art.

The report said the arts and creative industry has “continually suffered the highest unemployment rate than any other industry in Ohio.”

The unemployment rate for April, as released by the Ohio Department of Job and Family Services’ labor market information, was 21% for arts and entertainment. Categories like leisure and hospitality, and accommodation and food were the closest rates to the arts, at 13.23% and 11.86% respectively.

Pandemic restrictions have been largely lifted in the state of Ohio. In the most recent numbers from May 2021, Ohio labor market information showed arts, entertainment & recreation with employment of 69,900, up from 33,400 last year.

The survey of OCA members also showed many arts and culture organizations slashed budgets by an average of 30%, but still anticipate a “significant deficit” for fiscal year 2022.

In November 2020, Ohio allocated $20 million in CARES Act dollars to the arts community, which was needed as a temporary stop-gap.

“But unfortunately, the organizations permitted to apply for CARES (Act) funding indicate in this new survey that the one-time relief aid had only kept their institutions afloat for an average of six weeks,” said Angela Meleca, executive director of the Ohio Citizens for the Arts, in a statement on the survey.

The report was a follow up of a survey done in the fall of 2020, which found more than $70 million was needed to cover gaps in funding created within the industry by the pandemic.

According to Meleca, that funding is needed to rehire laid off employees and cover production costs, which would usually be covered through earned revenue such as ticket sales. Following the study’s findings, the OCA is asking the state to provide $50 million in additional help to cover the gap.

“No business can be expected to survive, by no fault of their own, on zero earned income for more than a year and then be presumed that they can stay alive without additional one-time assistance,” Meleca said.

Throughout the pandemic, members of the arts community have tried different ways to deal with the closures, including online events and even teaching lessons to make up lost money.