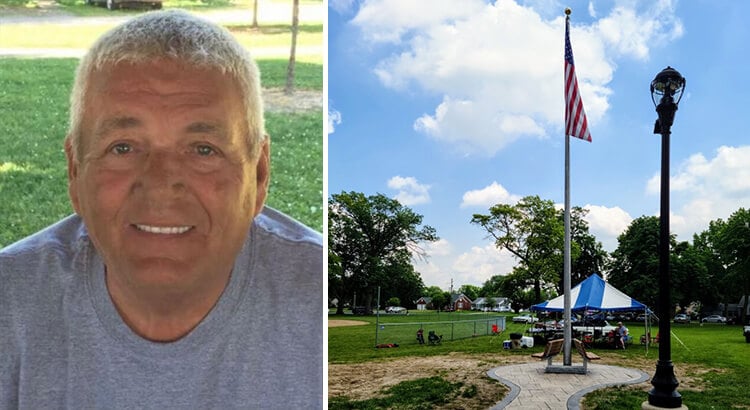 Tiffin, Ohio — Community members and local leaders came together Sunday at Oakley Park to remember the late Paul Elchert Jr., a longtime civil servant who passed away in February after a battle with COVID-19.

The pathway at Oakley Park was named after Elchert by his fellow council members, who wanted to thank him for his service upon his retirement in 2013. Additionally, Elchert’s birthday, June 15, was dedicated as “Paul Elchert Make a Difference Day” by Montz in honor of Elchert’s volunteerism and service to the community.

Elchert served 26 years on Tiffin City Council beginning in 1987, when he was first elected to represent the city’s Second Ward. He then went on to serve as city council president for several years beginning in 2002 until his retirement.

Following his passing, the Elchert family raised funds to dedicate a memorial at the park, which was unveiled during Sunday’s ceremony.

Montz said Elchert was a mentor to him during his early political career, saying that he “really took me under his wing.”

“Back when I ran as an 18-year-old in high school, I was so proud of the way Paul treated me. He never once asked what political party I was when I was a young kid, didn’t care about any of that. All Paul cared about was, if you had your heart in the right place and wanted to make Tiffin a better place, you were on Paul’s team,” Montz said. “It didn’t matter political party, or what your national beliefs were. If you believed that Tiffin was a great place, and you wanted to make the city an even greater place, you were certainly on Paul’s team.”

Elchert was known as a friendly face throughout Tiffin and as someone who deeply valued his family, friends and community. The countless hours he spent volunteering throughout Tiffin made the city a better place to live, work, play, and stay.

“More than 200 people gathered to remember the late President of Tiffin City Council and pay our respects with one last trip around the trail. Paul served as a mentor to me while I was coming up through the ranks as we both shared a common passion of making Tiffin a better place for everyone. Now, his memory will forever live on at Oakley Park,” Montz said.

Snacks and refreshments for the event were generously donated by Tiffin Paper Company, Hempy Water, and Ballreich’s.