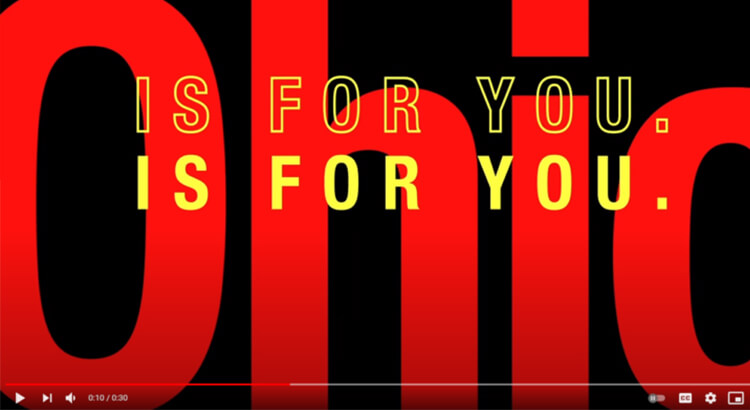 Welcome back to another installment of the Ohio Capital Journal Mailbag. Sports betting is not yet legal here, but the odds are good you will find this political column enlightening. (I hope.) Let’s get to it:

Who keeps running those awful Ohio is for Leaders ads during the NBA playoffs?

Answer: The quality of the advertising is in the eye of the beholder, I suppose. As for who is responsible for the ads, that would be JobsOhio.

“Ohio is For Leaders” is a marketing campaign from JobsOhio, an economic development arm of the state government. The campaign has featured billboard advertising in various cities from New York to Seattle, with the goal of enticing residents to relocate to the friendly confines of The Buckeye State.

“Your buildings are taller,” one billboard near Times Square reads. “Our taxes are smaller.”

There have also been TV commercials aired during the major events like March Madness and now the NBA playoffs.

One person on Twitter described the ads as “brilliant marketing but annoying … kinda like most peeps from ohio…”.

The “Ohio is for leaders” commercial is weird, huh

Smith, who lives in San Francisco, said the ads have been a constant presence in his West Coast media market.

Readers can watch a YouTube promo from JobsOhio and judge for themselves:

Do criminal convictions bar someone from holding public office?

Answer: It depends on the conviction and the office being sought.

Ohio law prohibits a person from holding office in the General Assembly if they have been convicted of a felony. (A felon would be barred from running; a sitting lawmaker would be automatically booted if convicted while in office.)

There are further restrictions against a person holding any public office in Ohio if they have been convicted of a felony “that involves fraud, deceit, or theft.”

There is nothing, however, that prohibits a person from serving if they have been accused of committing a felony. Which brings us to another question…

“Can Larry Householder run for office in the next election?”

The next General Election is in November 2022. As of this writing, Householder remains on trial for public corruption.

If he is found not guilty, he would be eligible to run in 2022. Technically, if the case is still pending by then, he would retain his eligibility.

This would present a unique scenario, as members would not be able to expel him again. The Ohio Constitution states a legislative chamber can vote to expel a member — as it did last week — “but not the second time for the same cause.”

In 2019 and 2020, both chambers of the Ohio General Assembly were led by Republicans named Larry: Householder in the House and Obhof in the Senate. Now in 2021, both are led by Republicans from the City of Lima: Rep. Bob Cupp and Sen. Matt Huffman. Coincidences abound.

In the hours after Householder’s expulsion, it occurred to me the state legislature would thenceforth be Larryless. (Obhof was term-limited after 2020.)

So I did some digging and found there has only been one year since 1997 that a lawmaker named Larry did not serve in the General Assembly. These are the types of things you spend time on instead of watching a lousy baseball team drop its 43rd game in mid-June.

I went to bed last Wednesday planning to share my Larry Research the next morning. Apparently I’m not so original after all, as esteemed legislative correspondent Noah Blundo with Hannah News Service beat me to the punch:

I believe Thursday will be the first day in more than a decade that the Ohio General Assembly has no Larrys. My research indicates the last Larryless period was the 128th GA, after the terming out of Larrys Mumper and Wolpert, before the appointment of Larry Obhof.

Sports betting in Ohio takes one more step toward legalization – Here’s an update from me about the latest sports betting news.

How can we do higher quality early childhood programs in Ohio? – Contributor Rob Moore offers this commentary about a budget provision eliminating the “Step Up to Quality” child care standards mandate.