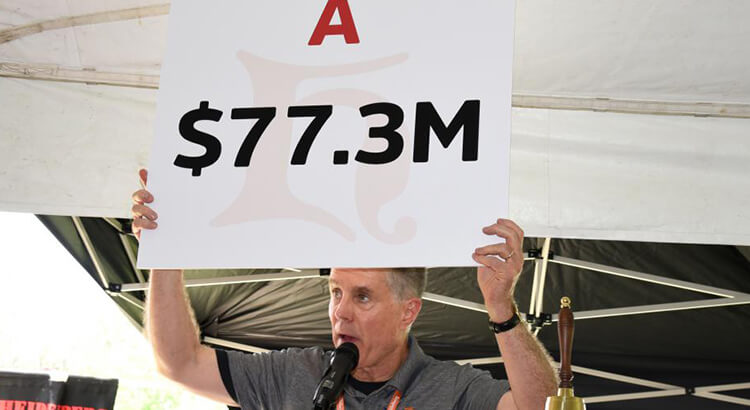 On Saturday, President Rob Huntington announced during Alumni Weekend that donors have contributed and pledged a total of $75.3 million toward four key strategic ACCE “pillars”: People, Infrastructure, Programs and Facilities.

ACCE began with a “whisper phase” in the spring of 2011 and concludes as the single largest, most successful fund-raising campaign in Heidelberg’s history.

“The overarching goal of ACCE over the past 10 years has been to strengthen our core academic offerings and the accompanying co-curricular programming leading to student success, support of our faculty, and ultimately, to elevate Heidelberg among its peers,” Rob said. “The impact of ACCE cannot be overstated. We are forever grateful for the generosity of our donors to support our mission. They already have made and will continue to make a significant difference in so many meaningful ways, both seen and unseen.”

He told the 350-plus alumni gathered at the Alumni Weekend luncheon, “You should feel really great about this. All of you contributed to it and that’s what makes it special.”

“This has been an extraordinarily successful undertaking,” said Phil Ness, vice president for University Advancement and Alumni Affairs. “Not only have our donors helped to position us for today but through their generosity in creating planned gifts, Heidelberg will have strong support in the future as those gifts mature and our endowment grows accordingly.”

Because of its breadth, ACCE has positively impacted nearly every aspect of Heidelberg’s campus, aligning with its four strategic pillars.

“We have applied these monies to programs specifically targeting activities that have had a positive impact on retention by promoting evidence-informed teaching and learning practices,” Courtney said. Faculty have been able to offer programming such as the HYPE Day faculty development as well as Faculty Learning Communities about how to best teach first-year students. The center also has expanded its academic support offerings to support student success with special programming such as small group study sessions, monitored study tables and working directly with coaches to support student-athletes, she added.

While students and faculty across the board have benefitted from the impact of ACCE gifts, the natural sciences have been particularly blessed with enhancements to facilities and equipment, research opportunities and travel to national conferences for students.

“ACCE has completely changed how I am able to educate chemistry and biochemistry majors and ensure that they are prepared for a life of purpose with distinction,” said Nathaniel Beres, associate professor of chemistry. His department was able to improve lab equipment “to ensure students are learning marketable skills in the lab.”

“This has directly led to the placement of many of our graduates into Ph.D. biochemistry programs,” Nate said.

ACCE has helped fund student travel to experience chemistry and biochemistry in the real world.

“Through touring national laboratories, research facilities and graduate programs, students have come to better understand how they want to use their education once they leave Heidelberg,” he explained.

Biology professor Pam Faber, who worked closely with the University Advancement team on securing a number of the gifts, sees the outcomes of ACCE gifts daily in her teaching. Students in the natural sciences have been provided with strong support for conducting research, attending conferences and learning in new labs – such as the Longaker Animal Lab – with upgraded equipment.

Pam especially notes the improvements that have been made in the area of anatomical study, her area of expertise. Heidelberg’s cadaver lab – one of the few of its kind at small colleges and universities nationwide – has new microscopes, flexible tables and chairs and hydraulic tables among its upgrades. Additionally, the lab now has a secure source of long-term funding for the procurement of donor cadavers from The Ohio State University.

“Students bound for graduate health professions programs often return to tell us how impressed admission personnel are about the breadth of experiences they have had at the undergraduate level,” Pam said. Heidelberg’s pre-health students leave especially well prepared in the area of human anatomy and often lead their graduate lab groups in dissections in their gross anatomy courses. “It is then, after they leave us and compare their preparation to that of others, that they truly understand how our financial donors’ generosity has positioned them for success.”
One of the significant impacts of ACCE has come in the form of new student scholarships created by donors.

Throughout the campaign, a total of more than $14 million has been gifted or pledged through planned giving for scholarships. More student scholarships will come from planned estate gifts in the future.

These funds, directed to providing financial assistance to Heidelberg students, provide a valuable and effective tool in recruiting top students and retaining them through to graduation.

“These and other scholarships provide us with the resources to enroll great students who will succeed academically and graduate from Heidelberg,” said Tony Bourne, vice president for Enrollment Management and Marketing.

“Financial aid through scholarships helps keep the cost down for students so that they graduate with lower debt as well.”

Tony said the current climate for recruiting students is highly competitive, with many schools offering more and more discounts to well-prepared students. “Without scholarship dollars like those from ACCE, we will find it more and more difficult to be competitive in student recruitment,” he said.

Here are a few additional highlights of ACCE: