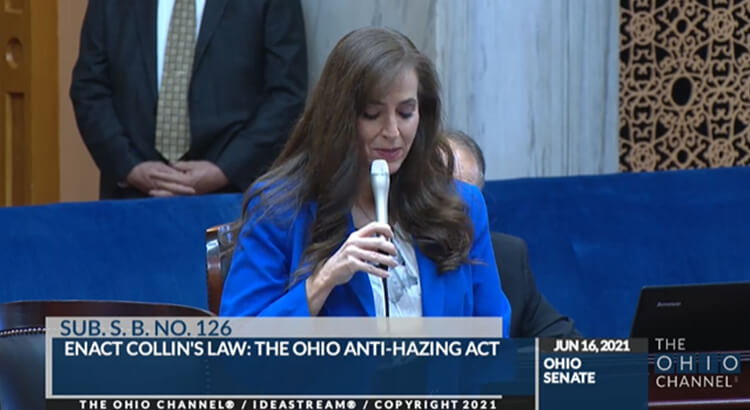 A bill to expand criminal penalties for hazing and create prevention methods for colleges and universities has passed the Ohio Senate.

The bill was a reintroduction of Collin’s Law, named after Ohio University student Collin Wiant, who died of asphyxiation due to nitrous oxide ingestion after attending a fraternity related party in 2018. Members of the Sigma Pi fraternity at the school faced criminal charges for their roles in connection with Wiant’s death.

After the death of Bowling Green State University student Stone Foltz in 2020 during a Pi Kappa Alpha new member event, the bill reappeared with new life behind, including sponsorship from state Sen. Theresa Gavarone, R-Bowling Green.

“My community is still hurting after a such a senseless tragedy,” Gavarone said Wednesday during the Ohio Senate’s full session.

Gavarone said sponsors “simply ran out of time” during the lame duck General Assembly last year, but she and co-sponsor Sen. Stephanie Kunze, R-Hilliard, said the passing of Foltz, along with continued pushing by Wiant’s family for a change to college traditions, emphasized the need for the bill’s passage.

“This legislation is not only about enhancing penalties, but changing college culture,” Kunze said. “Increased consequences for hazing show how serious we as a state will take hazing.”

Those consequences would include increase the existing penalty for hazing to a second-degree misdemeanor, and new bans for “recklessly participating” in hazing including forced consumption of alcohol or drugs, by an individual, official or even a parent or guardian.

“Special officials” are named as part of the new hazing legislation, who would be subject to criminal charges if they were found to permit hazing. Those officials include an organization or education institution’s officials, employees, faculty members, teachers, consultants, alumni or volunteers.

Violation of those new bans would result in a third-degree felony, and failure to report to law enforcement knowledge of hazing a fourth-degree misdemeanor.

The bill passed the Senate unanimously.