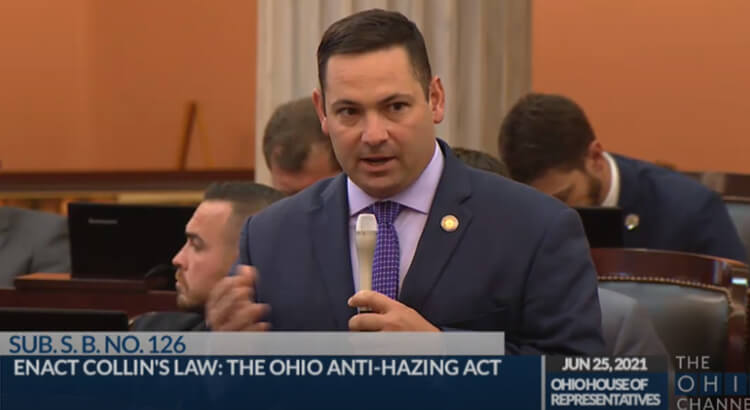 As Collin Wiant’s family looked on and applause rang out, the Ohio House of Representatives passed a bill Friday that would further criminalize the actions that led to his death.

Senate Bill 126 received unanimous approval from the Ohio House, which sends it one step closer to the governor’s desk, and enactment into law.

Wiant was an Ohio University student in 2018 when he attended a Sigma Pi fraternity party, where a coroner’s report said he died of asphyxiation due to ingestion of nitrous oxide.

Bill sponsors expressed even more urgency for the bill to become law after the death of Bowling Green State University student Stone Foltz, who died of alcohol poisoning earlier in 2021 during a new member event at the Pi Kappa Alpha fraternity.

State Rep. Haraz Ghanbari, R-Perrysburg, acknowledged the Wiant’s family’s presence in the chamber as the bill came up for discussion.

The law bans “recklessly participating” in hazing, including forced consumption of alcohol or drugs, and increases the existing penalty for hazing to a second-degree misdemeanor.

Education officials, employees, faculty or alumni can face a third-degree felony if found to permit hazing. Failing to report knowledge of hazing to law enforcement would result in a fourth-degree misdemeanor charge.

The House entered a single amendment during their vote on Friday, which removed parental liability for the language of the bill. The language was found by state Rep. Dave Leland, D-Columbus, the day before the legislation hit the House floor. With the change, Leland said he fully supported the bill.

The legislation passed the Senate earlier this month, but will go back for approval of the amendment before moving on for Gov. Mike DeWine’s signature.