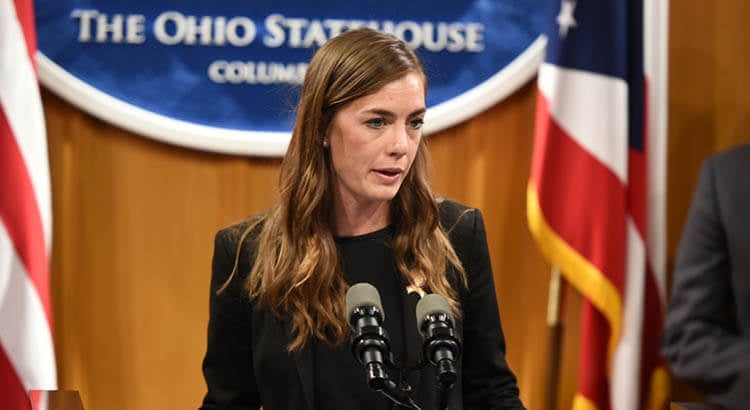 Five Ohioans who have been vaccinated against COVID-19 are about to win $1 million through a new vaccine lottery program, but a Republican lawmaker wants to call the whole thing off.

State Rep. Jena Powell, R-Arcanum, is drafting legislation that would prevent the state from administering any vaccine lottery program.

Hundreds of thousands of Ohioans have already signed up for the Vax-A-Million lottery, which will begin May 26 and include five weekly drawings of $1 million prizes. Participants must be at least 18 years old and have received at least their first dose of the Pfizer-BioNTech, Moderna or Johnson & Johnson COVID-19 vaccine.

There is a separate lottery program for those between the ages of 12 and 17, with the teenage winners receiving a full ride scholarship to any Ohio college or university.

The prize money will come from federal relief funds that have already been allocated to the Ohio Department of Health.

There is some early evidence that vaccinations have ticked upward since that announcement, and two other states have now introduced their own version of a vaccine lottery.

The Vax-A-Million program has received plenty of attention since Gov. Mike DeWine first announced the drawings last week. The reaction from Ohio lawmakers has been universally negative; legislators from both political parties have condemned the idea as an ill-conceived waste of taxpayer money.

“As elected leaders, we’re obligated to take seriously our duty to be good stewards of taxpayer dollars,” House Minority Leader Emilia Strong Sykes, D-Akron, said in a recent statement. “Using millions of dollars in relief funds in a drawing is a grave misuse of money that could be going to respond to this ongoing crisis. Ohioans deserve better than this. I do hope people continue to get the vaccine and help our state reach herd immunity so our economy and way of life can thrive again.”

Bills normally require a 3-month waiting period until being enacted. Powell’s legislation includes an emergency clause for it to go into effect immediately in order to “prevent the COVID-19 vaccination lottery from taking place.”

Along with prohibiting Vax-A-Million, Powell proposes to redirect the funding used for these drawings toward either children’s mental health initiatives or to small business relief grants.

The Ohio Capital Journal left a message with Powell’s office seeking more information about the legislation, which has not yet been formally introduced. Given the normal timeframe of the legislative process, the likelihood of this halting the Vax-A-Million drawings appears to be a longshot.

Powell has been among the harshest critics of DeWine’s handling of the COVID-19 pandemic, repeatedly characterizing his aggressive steps taken to prevent the virus from spreading as curbing Ohioans’ freedoms. She has blasted attempts to mitigate the pandemic, from masks to social distancing, and spent much of 2020 undercutting the state health department’s messaging — even as the virus raged in her native Darke County late last year.

Powell represents Darke and Miami counties in the Ohio House of Representatives’ 80th District. Both counties lag behind the statewide vaccination rate.

As of Friday, nearly 44% of Ohioans had received at least one dose of the COVID-19 vaccine. Just 29% of those in Darke County had received one along with 36% in Miami County, according to Ohio Department of Health (ODH) data.

“Ohioans don’t want giveaways to mask (DeWine’s) horrible policy for the past year,” Powell wrote on Facebook, “they want freedom.”