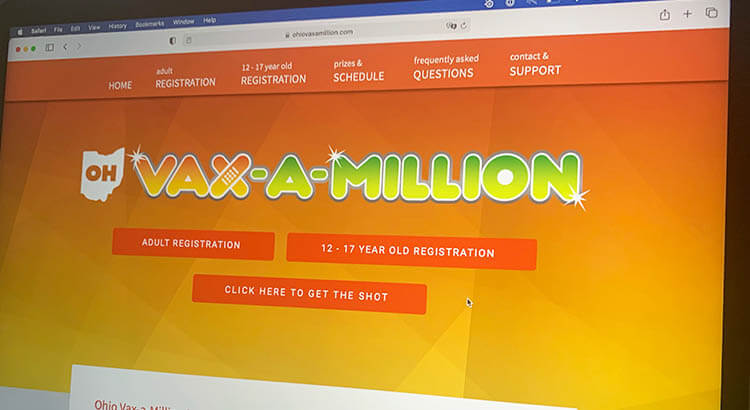 A photo of the Ohio Vax-A-Million website. (TiffinOhio.net Photo)
ShareTweet

There is a saying in public health that you need to “meet people where they are.” The problem is that realizing where people are can sometimes be depressing.

This is this hard truth that Gov. Mike DeWine alone was willing to face in turning to a lottery — the so-called Vax-a-Million — to convince more Ohioans to get the COVID19 vaccine. And early returns suggest it is working.

Most Ohioans can remember the days when Dr. Amy Acton assured us that not all heroes wear capes, with the assumption being that some heroes wear white coats while others wear masks. We told ourselves that, “We can do hard things.” But the decision to get vaccinated actually should’ve been pretty easy.

Instead of values and a social contract, we have odds and a crapshoot. It makes sense, in a way. After all, throughout the pandemic we have weighed the odds of getting COVID-19 with the burdens of wearing face coverings, social distancing, and other measures. We have assessed our own risk aversity to find a level of social engagement that we felt was right for ourselves and our families, but this also included a calculation of how much risk we were willing to impose on those around us.

What DeWine understands, and that many of us do not, is that the possibility of an economic windfall might be able to accomplish what other modes of persuasion could not. For whatever reason that gives him this insight, he seems to intuitively understand the cultural power that lotteries hold in our state. On Twitter yesterday, somebody noted that “Ohioans do love a lottery.” I guess they do. I guess we’ll see.

We are now confronted with the fascinating idea that the statistical improbability of winning a lottery might be the motivator that moves otherwise resistant Ohioans to get the vaccine. It’s hard for me to grasp, but if it works, it works. Rumsfeld said, “You go to war with the army you have, not the army you might want or wish to have at a later time.”

This is about shots in arms, not ethics or a sense of community.

Though there are some good early signs, we of course don’t know whether this will really work. In fact, DeWine hasn’t given us a clear sense of what would constitute “working.” It doesn’t seem that we have a rigorous means of tracking this lottery’s effects, though rising vaccine rates over the coming days and weeks will likely be attributed to the lottery.

Responses to the vaccine lottery have ranged from apoplectic disbelief and ridicule to excitement and a pragmatic concession to reality. Regarding the latter, there is a cynical reading of human motivation that DeWine is willing to acknowledge in the interest of ending the pandemic. But there is a paradox in it, as well. While the likelihood of winning the lottery is very low, the potential upside is high. How many Vax-a-Million entrants will understand that they won — even as they lose?

There’s also a paradox in the financial justifications. $5 million is just a “drop in the bucket,” we’re told. And anyway, it’s federal money, so who cares? If this were state money, the story would be different, which is revealing of our state politics. But just as DeWine has slated $5 million in federal monies for a lottery to incentivize vaccination (with much of it coming back in taxes), the state is planning to preemptively end unemployment benefits established during the pandemic, leaving many millions of dollars on the federal table, all in the name of a flawed economic theory of job creation being hawked by some of Ohio politicians.

We’ve been told that the problem with vaccine uptake isn’t the “biological science,” but “behavioral science,” which is just a hifalutin way of saying “the vaccine is safe and effective, but people just can’t seem to bring themselves to do the right thing.”

For those keeping score at home: The rational actors who are not reentering the workforce for poverty wages must be nudged by cutting off unemployment supports. Vaccine resisters, on the other hand, must be tantalized by the prospects of a million-dollar windfall. Got it.

And so we turn to a lottery to see if we can turn a corner with vaccine uptake in Ohio. Shots in arms are shots in arms. And anyway — in case I didn’t make it clear already — it’s federal money, so who cares?

I was vaccinated in April. But now that I’m enrolled in Vax-a-Million, the real excitement has begun. Now I wait for the good news, hopeful that my state will turn a corner.

Dan Skinner is Associate Professor of Health Policy at Ohio University’s College of Osteopathic Medicine, located on the Dublin campus. He is the host of Prognosis Ohio, a health care podcast produced in collaboration with WCBE, a Central Ohio NPR affiliate. Follow Dan at @danielrskinner.