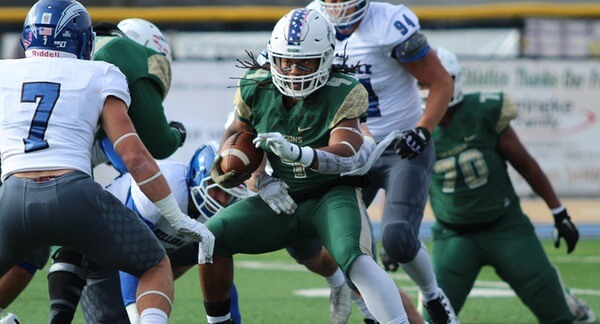 Tiffin, Ohio — Tiffin University football running back Ja’Quan Hardy has signed with the Dallas Cowboys as an undrafted free agent.

A battering ram at the line of scrimmage with deceptive breakaway speed at the second level, Hardy had a brilliant 2019 season as he tied the GMAC single-season rushing record with 1,554 yards (third in Division II) on 204 carries.

He set single-season conference records by averaging 141.3 yards per game, 7.6 yards per rush (sixth in Division II), and ripped off the longest run from scrimmage, dashing 94 yards against Walsh.

Hardy was presented with the 2019 Great Midwest Player of the Year award and was named a Second Team All-American by both the AFCA and the D2CCA. He was a Third Team All-American selection by Don Hansen and was Honorable Mention All-American by D2Football.com. In those outlets, he was also all-region before moving on to the next stage of voting in the awards process.

Hardy tied for the league lead with 15 rushing touchdowns and three scores in three different games. Hardy’s single-game best total on the ground in 2019 was 220 yards vs. Ohio Dominican, tied for the seventh-most among all Great Midwest tailbacks.

Overall Hardy is fifth in the Tiffin career record books in attempts, third in yards, third in touchdowns, tied for eighth in points, and eighth in all-purpose yards.

“Our entire program is incredibly proud of Ja’Quan and excited to see him sign with the Dallas Cowboys,” said TU Head Coach Cris Reisert. “The Cowboys are getting a first-class person and dynamic football player. We can’t wait to see his success in Dallas.”