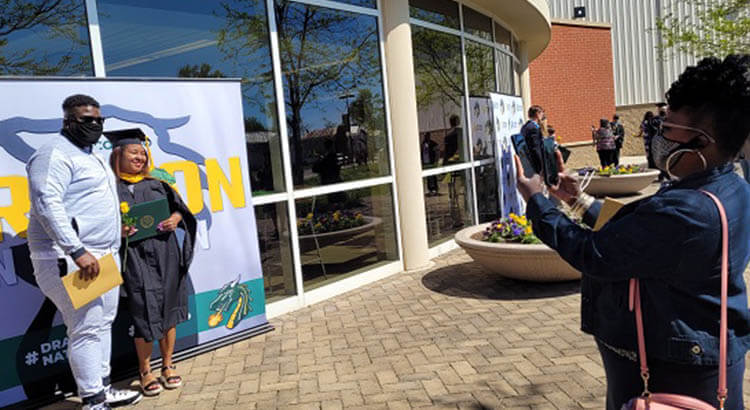 TU safely opened its doors to friends and family to celebrate this year's graduates. The day was comprised of two ceremonies: with the graduate ceremony in the morning and the undergraduate in the afternoon. (Photo courtesy Tiffin.edu)
ShareTweet

Tiffin, Ohio — Tiffin University celebrated its 133rd annual commencement on Saturday, May 1 at the Heminger Center.

The day was comprised of two ceremonies: the graduate ceremony in the morning and the undergraduate in the afternoon. Both ceremonies were live-streamed and can be accessed at tiffin.edu/commencement.

At the morning graduate studies ceremony, Dr. Lillian Schumacher, Tiffin University President, welcomed the new graduates and reminded the crowd of her favorite quotation from Mahatma Gandhi “If you choose to, you can be the change you wish to see in the world.”

She was followed by Andrew Felter, Board of Trustees Chairman, who opened the graduate ceremony by congratulating graduates saying, “2021 Graduates, you have achieved an outstanding milestone amid one of the most tumultuous, disruptive years for society in modern history. The COVID-19 pandemic, social unrest, racial injustice, contentious elections, and divisive presidential succession have contributed to uncertainty and much mistrust in society.” He went on to say “What I hope you have taken away from the experiences of this past year is a great deal of personal resiliency. The grit that you have displayed during your educational experience to get here today will serve you extraordinarily well for years to come in your personal and professional development.”

Graduate degrees were then conferred by Dr. Schumacher.

After the collapse of the economy in 2009, Wells and her family created a platform that focused on providing an alternative long-term care solution to those on Medicaid programs throughout the U.S. Since its first community opening in 2010, Priority Life Care has expanded into one of the largest senior housing providers in the nation. Priority Life Care focuses on third party management of independent, assisted living and memory care communities. Wells, as CEO, is also charged with leading the company in pursuit of its purpose to support independence.

Wells spoke about courage, “a word that can carry you through your darkest times and your biggest
challenges – a word that can raise you to fantastic heights and help you create your destiny.” She said that the graduates were here, not only because they worked hard, but because they had the courage to pursue your degree in difficult times. She went on to say, that “Your courage here at Tiffin, should give you confidence beyond these walls…If you have a dream, you can have the confidence and the courage to pursue it.”

After speaking, Wells was presented with an honorary degree of Doctor of Humane Letters, presented by Provost Dr. Peter J. Holbrook, Associate Provost Melissa Weininger and confirmed by Dr. Schumacher.

Undergraduate degrees were then conferred by Dr. Schumacher.