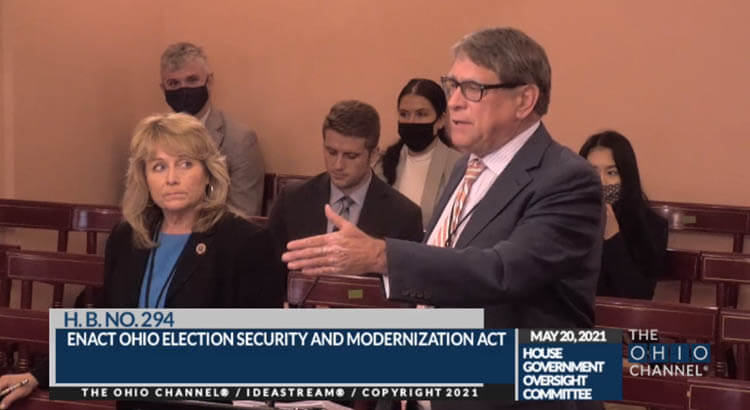 The Republican sponsors of a bill to change various pieces of Ohio election law had their first opportunity Thursday to make a case why these changes are necessary.

State Reps. Bill Seitz, R-Green Twp., and Sharon Ray, R-Wadsworth, fielded questions from a handful of Democratic lawmakers, each sharing concerns that some of the provisions would restrict ballot access for Ohio voters.

The hearing was contentious at times and ended with Democrats walking out in protest of their questioning being limited to about 90 minutes. The GOP committee chairman, Rep. Shane Wilkin of Lynchburg, told them the Republicans had a separate caucus meeting to attend.

Here are some of the main provisions in House Bill 294:

Democrats focused much of their attention at Thursday’s hearing on the issues of drop boxes and absentee ballot requests. They argue Ohio should be looking to expand the usage of drop boxes instead of limiting their placement to only at boards of elections offices.

Seitz is a major critic of drop boxes. He is in favor of removing drop boxes entirely, but described being willing to propose their limited use in the final days of an election season as a compromise with Ray.

Seitz argued that placing drop boxes throughout Ohio would be costly and difficult to keep them secure.

Rep. Seitz just said he opposes ballot drop boxes because he theorizes that Antifa and “Q Anon people” could put cherry bombs in them to destroy ballots pic.twitter.com/uuYJh4m9jE

The absentee ballot request deadline is another key issue. The current deadline — of noon on the Saturday before Election Day — is viewed as troublesome, with there being only a few days to get ballots out to voters for them to be returned in time.

Rep. Bride Rose Sweeney, D-Cleveland, called the 10-day mark “too restrictive.” She noted that hundreds of thousands of Ohioans requested ballots in the 10 days before the 2020 General Election, with 91% of ballots returned properly.

“You’ve just admitted that 9% of the people were disenfranchised by the 3-day deadline,” Seitz countered. “That’s a big number. If we disenfranchised 9% of the Ohio population, I guarantee there’d be plenty of people jumping up and down and screaming about it.”

There was also scrutiny given to the proposal to eliminate the scheduled day of early, in-person voting on the Monday before Election Day. Seitz and Ray have said this change was included at the request of elections officials, who want the day left open in order to better prepare for a lengthy day of voting.

Seitz said he is planning an amendment that would move the six hours of early voting from that day to earlier days in the voting calendar.

Minority Leader Emilia Strong Sykes, D-Akron, said if legislators are going to make this change, then they should also consider other changes sought by elections officials — such as an increase in drop boxes.

‘Easy to vote and harder to cheat’

In their testimony, the two sponsors agreed that Ohio already has an exceptional voting system. Seitz said Ohio conducted an “outstanding election” and highlighted the record turnout in all areas of the state. Ray said the state “succeeds at elections because we’ve found the right balance of voter access and election security.”

Still, they believe changes are necessary, with Seitz saying “we constantly seek to modernize our election laws with the view of making it easy to vote and harder to cheat.”

Democrats have painted a less-rosy picture of the 2020 election here, referencing the long lines for early voting and drop boxes seen in the more populated counties.

The Democratic Party and other voting rights organizations have portrayed HB 294 as a voter suppression bill. Critics have compared the bill to the hundreds of other pieces of legislation across the country that propose to restrict voting access in some way.

Voting advocates outside of Ohio have taken notice, including Stacey Abrams, the former lawmaker from Georgia who now leads the anti-voter suppression group Fair Fight Action.

Georgia. Texas. Florida. Arizona. Now Ohio. HB 294 will clearly suppress the votes of the inconvenient, the marginalized & those who wish to be heard. This isn’t about your partisanship. It’s about our patriotism. Tell Ohio leaders that the insurrection failed & to vote NO. https://t.co/82O3V1P00H

Others have gone further. The Ohio Women’s Alliance likened the bill to “Jim Crow measures” and called it “an unequal and discriminatory policy, to target vulnerable populations that use voting as means for survival.”

They’re trying to make it harder to vote and turn back the clock to the Jim Crow era.

Seitz pushed back against the notion of HB 294 being a voter suppression bill, pointing out it leaves in place a system that allows for weeks of early in-person voting and weeks of no-excuse absentee voting. He read off a mixture of red- and blue-leaning states with a more limited early voting schedule.

When Sweeney said her office has received hundreds of emails and calls from Ohioans criticizing the bill, Seitz responded that he didn’t care.

“There has been an orchestrated campaign by folks on the left to gin up form letters, which I care very little for, because they all rest on a thread of misinformation and lies. So I don’t care if you’ve gotten 500 letters, I don’t care if I’ve gotten 200 letters. They’re form letters and they’re resting on a tissue of lies,” he said.

Election debate will remain in House for the time being

For now, the Ohio Senate is content with letting the House take up the issue of election changes.

Senate President Matt Huffman, R-Lima, told reporters this week his chamber is not currently working on the subject.

“The timing is often dictated by the bandwidth,” Huffman said. The Senate is in the midst of detailed budget negotiations along with other comprehensive legislation.

Huffman suggested the Senate would wait to see what the House passes, then will debate the issue later this year.