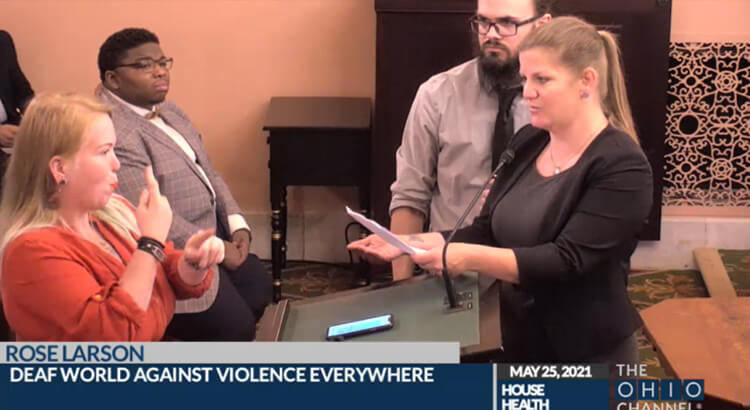 Growing up gay and deaf, Joe Osborne-Payne knows how it feels to be stigmatized.

He doesn’t want the language of state laws to stigmatize him, too.

Osborne-Payne, the chief information officer for the Ohio Association of the Deaf, is among those advocating for legislators to rewrite certain sections of the Ohio Revised Code to take out antiquated, offensive language.

House Bill 281, called the Mental Health and Disability Terminology Act, would replace a number of terms in existing Ohio law with suitable replacements considered more respectful in modern society. An example would be replacing “lunatic” with “incompetent individuals.”

The bipartisan bill is sponsored by state Reps. Dontavius Jarrells, D-Columbus, and Tom Young, R-Washington, and already has dozens of cosponsors in the Ohio House of Representatives.

At the bill’s first committee hearing Tuesday, Jarrells said it is time that Ohio sees a “comprehensive update” to its statutory language. With around 1-in-4 Ohioans having a disability, Jarrells called it important to remove language that furthers harmful stereotypes.

Young noted that many of the proposed wording changes are meant to embrace “people first language,” wherein a person is not fully defined by their disability. Instead of referring to someone as simply being “disabled,” advocates recommend saying “person with a disability.”

That is an important distinction, said Dr. Larry Johnson, a dean and professor of behavioral education at the University of Cincinnati.

“Person first language is the most respectful way to refer to individuals with a disability because it embraces the dignity and equality of the individuals and makes the fact that they have a disability secondary,” Johnson told lawmakers.

Rose Larson, the executive director for Deaf World Against Violence Everywhere (DWAVE), noted those who are deaf sometimes struggle to attain quality service due to the “stigma of language that is used to describe them.

“It is inhumane and demonizing to continue to use outdated language and maintain an antiquated mindset against a community who persist on having it changed,” testified Larson, who like Osborne-Payne, communicated with lawmakers using American Sign Language with the help of interpreters.

Larson called HB 281 a “great start” toward pushing for broader inclusivity in Ohio.

Ohio legislators moved to take out references to “mentally retarded person” back in 2016. Groups such as the National Alliance on Mental Illness (NAMI) of Ohio, Adult Advocacy Centers and Ohio Peer Recovery Organizations have pushed for lawmakers to take a close look again at state code to make further changes.

Juliet Dorris-Williams, a board director for the latter organization, testified these changes are about a matter of respecting each other.

“Human beings should never be referenced as a condition, nor should we be relegated to certain categories due to our capabilities at any state of life or development,” she told lawmakers.

Rep. Jarrells called the review of the entire Ohio Revised Code a “huge undertaking,” but worth it to allow the state to better serve those such as Larson and Osborne-Payne.

Osborne-Payne joked to lawmakers on the Ohio House Health Committee that he was a little out of practice in giving presentations.

When he was finished, Committee Chairman Scott Lipps, R-Franklin, complimented the testimony and said he had done a fine job.

The Newark native had a succinct reply, passed along by the interpreter: “It’s bravery.”