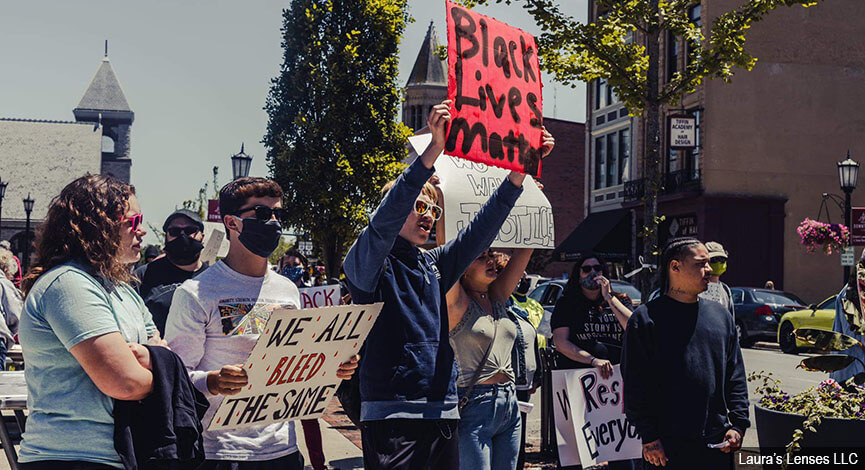 About a month after a Minneapolis police officer murdered George Floyd during an arrest last summer, Gov. Mike DeWine announced a package of proposals he said would impose accountability on police.

As of Tuesday, the one-year anniversary of Floyd’s death, none of those proposals became law or even went up for a vote.

In mid-April 2021, DeWine outlined a similar package he said would be re-introduced in the current, two-year legislative session. Two months later, no such legislation has been publicly introduced.

DeWine said Monday at a press briefing he’s optimistic things will shake out differently this time around.

DeWine’s proposal, as described last Summer and this Spring, calls for:

The proposals were announced after footage captured Derek Chauvin kneeling on Floyd’s neck for more than nine minutes. Floyd’s death sparked mass protests worldwide against the excessive use of force.

One day after Chauvin was convicted on charges of Floyd’s murder April 20, DeWine said a police reform package would be coming “within a few days,” introduced by Rep. Phil Plummer, a former sheriff of Montgomery County. As of Monday afternoon, no such legislation has been introduced.

Plummer did not respond to an interview request. A spokesman for the governor said he believed the sponsors are still preparing the bill for introduction.

Gary Daniels, a lobbyist with the ACLU, said he doesn’t know any specifics on looming police reform legislation. He questioned why lawmakers hold repeated hearings on a sports betting proposal, while failing to even put forward any police accountability bill.

Additionally, he said while the ACLU may support some of the ideas as they come forward, a package is likely to fall short of needed structural changes. This includes limiting qualified immunity, which officers claim as a defense after killing civilians during stops; or shifting resources and response mechanisms away from armed officers and toward people trained to respond to mental health crises.

The Chairman of the Ohio Legislative Black Caucus, Rep. Thomas West, D-Akron, said in a statement that after a year of outcry after Floyd’s death, little has changed.

“OLBC members and members of the House Democratic Caucus have brought forth several pieces of legislation that our communities have been calling for, but we are still waiting to get hearings, let alone votes,” he said.

“Failing to take legislative action is not an option and cannot be our state’s response to widespread calls for change.”

Despite the standstill in Ohio, Democratic and Republican-controlled legislatures alike around the U.S. have passed a wave of police reform legislation since Floyd’s death.

At least 23 states passed “significant” legislation addressing topics aimed at imposing accountability, standards, and oversight on police, according to the National Conference of State Legislatures. These include requiring the use of body cameras, banning chokeholds, standardizing use of force definitions, limiting “warrior-style” training and others.

In his April 2021 comments, DeWine noted certain executive actions he enacted like banning the use of chokeholds by officers of executive agencies and purchasing body cameras for the Ohio State Highway Patrol. However, this does not include local police.

He also proposed spending $10 million over two years in grants for local law enforcement to purchase body cameras, which House lawmakers preserved in their version of the state budget. The Senate is reviewing the House-passed proposal.

The police reform stall, at large, points to DeWine’s limited influence among fellow Republicans who control both chambers of the Legislature. In the last year, lawmakers overrode his veto on legislation weakening the executive branch’s public health powers; shelved his proposed legislation to curb gun violence; and ignored his demands against their passage of a stand your ground bill (DeWine signed it regardless).