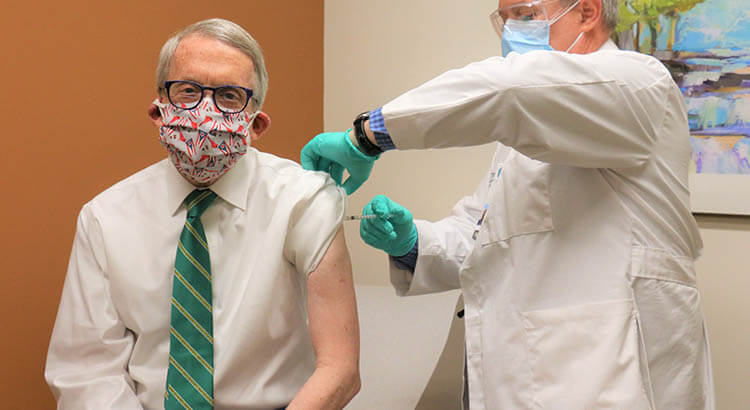 The Ohio Department of Health recontoured its COVID-19 vaccine lottery program, requiring inoculated Ohioans to register for entry in the $1 million sweepstakes instead of being automatically entered by virtue of voter registration and vaccination.

The change is likely to whittle down the number of entrants, thus increasing the odds of winning one of five drawings starting the week of May 24. Health officials said Monday they made the changes to enable a vaccination verification system.

ODH Director Stephanie McCloud, speaking to reporters, declined to quantify exactly how much she hopes or expects the lottery will drive up demand for vaccinations.

She said international media attention of the unorthodox effort and a social media buzz about it are evidence of early success.

“It is not a numeric goal,” she said. “As I mentioned earlier, we are already seeing the success of this program. It is to create awareness, to make sure that those individuals who may not fully understand may now have an interest in asking the questions they may have put off asking about the vaccine.”

Ohioans’ demand for vaccination has unmistakably plummeted. On March 31, more than 107,000 Ohioans received a vaccine dose against COVID-19. On April 30, fewer than 24,000 did, according to an analysis of state health department data.

All told, fewer than 43% of Ohioans have started the vaccination process, compared to the national rate of 47%.

Gov. Mike DeWine announced the vaccine lottery in a statewide briefing May 12, coupled with news of removing nearly all health orders in early June.

On Monday, he noted a modest increase in vaccine uptake May 14 as 25,000 Ohioans got their first shots, compared to about 13,000 per day on average over the preceding week. He cited this as early evidence of success of the lottery in incentivizing vaccination.

However, on May 10, federal officials greenlit use of the Pfizer-BioNTech vaccine on children aged 12-15, possibly contributing to some of the uptick. The CDC and DeWine administration formally updated their guidance May 12.

A health department spokeswoman declined a request for vaccine data among children aged 12-15.

At the briefing Monday, officials with the state lottery and state health department provided further details about the lotteries.

Alongside the $1 million drawings, vaccinated Ohioans aged 12-17 can enter to win one of five full-ride scholarships (including room, board, tuition and books) to any Ohio state college or university.

Ohioans can enter the lottery pool by visiting www.ohiovaxamillion.com or by calling 1-833-427-5634. Entrances will be carried over through all five drawings. State officials say they will remove all duplicate entries and verify vaccination records for all winners.

ODH is using federal stimulus funds to pay out on winnings. The first winners will be announced at 7:29 p.m. May 26. Subsequent announcements are set to occur each of the next four Wednesdays.

Read details on the lottery from ODH here.