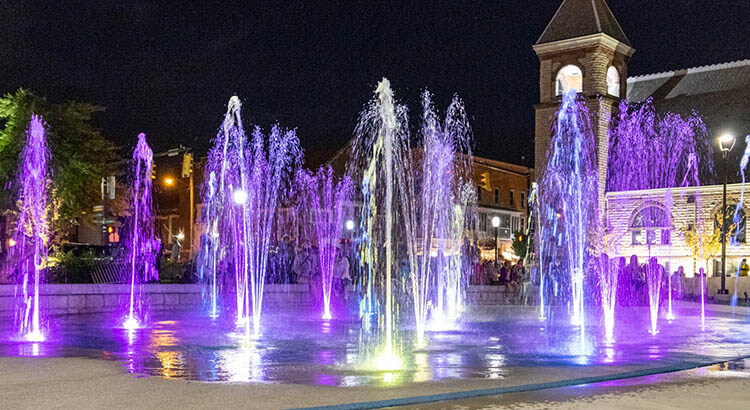 Tiffin, Ohio — The East Green Foundation is pleased to announce a 2021 season for the splash pad located at National Corner on the East Green complex.  The splash pad was closed completely during 2020 for health precautions due to the Coronavirus pandemic.

The exact opening date is undetermined at this time because of major system renovations taking place in June.  The Foundation is investing in a recirculating water system similar to what the city pool has at Hedges Boyer Park. Foundation president Mike Klepper stated that the clear goal is to open the splash pad to the public this June, but the pump manufacturer cannot commit to a more specific delivery date.

Once the splash pad is up and running it will be spouting forth daily through Labor Day, then it will be operational on weekends through the first weekend in October weather permitting. Hours will be 11am to 7pm on weekdays, and 11am to 9pm on Saturday and Sunday. The restrooms will be open during those hours, as well as when performances of the East Green Summer Concert Series are taking place.

Trustee Andrew Kalnow noted that the lighted fountain shows with music that took place in August last year will again happen this year thanks to a sponsorship by National Machinery.

The East Green Concert Series is excited to announce concerts are back for their third season. John Kerschner, Executive Director of the East Green Concert Series, stated the season will kick off on June 26th at the Frost-Kalnow Amphitheater on the East Green. Additional concerts are planned for July 10th & 24th, August 7th & 21st and September 4th. Concerts are free and family friendly, and start at 8:00pm. Reineke Family Dealerships once again is the general season sponsor, while individual concerts will have event sponsors or co-sponsors.

A further announcement will be coming soon about the performers for the June 26 concert, as well as the additional performances for the season. Kerschner also suggested that the public can monitor the website www.EastGreenConcerts.com for further information about the upcoming performers, as well as their Facebook.

The Frost-Kalnow Amphitheater is part of the East Green park complex located at the corner of West Market and Jefferson streets. The East Green park is managed by the City of Tiffin Department of Parks & Recreation, which also handles booking reservations for events at the Amphitheater.  Park rules and regulations are posted at on the Concert Series website.