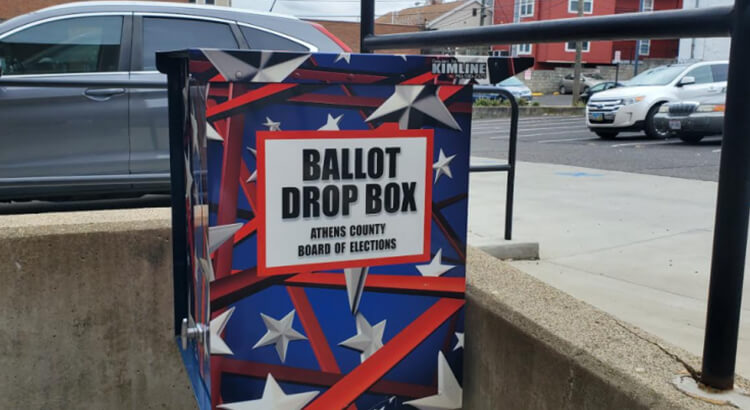 A ballot drop box is seen outside the Athens County Board of Elections. Photo by Tyler Buchanan.
ShareTweet

Ohio lawmakers are currently considering a number of changes to state elections law, with one of the proposals dealing with the use of ballot drop boxes.

House Bill 294, known as the “Ohio Election Security and Modernization Act,” would prohibit counties from placing drop boxes anywhere besides at the boards of elections offices. Voters would only be able to drop off absentee ballots during the 10 days preceding an election, compared to the full absentee voting period used in recent elections.

House Majority Leader Bill Seitz, R-Cincinnati, is a main sponsor of HB 294 and is among the biggest critics of drop boxes. Seitz’s preference is for Ohio to prohibit the use of drop boxes entirely, but said he acquiesced to allow them in a limited scope as a compromise to fellow bill sponsor Rep. Sharon Ray, R-Wadsworth.

Seitz and Ray appeared before the House Government Oversight Committee on May 20 to give their initial testimony in support of the bill. Seitz argued there are security concerns associated with expanding the use of drop boxes:

“The more you use these drop boxes, there are costs associated with their monitoring, there are costs associated with their security. There is a real risk, and I talked to a former secretary of state about this just two weeks ago, that people could put a little cherry bomb down that slot and immolate hundreds and hundreds of ballots and no one would be the wiser. So you could have Antifa doing that if the drop box was in a suburban Republican neighborhood, or you could have Q Anon people doing that if it was in an urban neighborhood. There are nuts on both sides, we have to acknowledge that. So those are the reasons that I’m very cautious…”

Elections officials from throughout the state told the Ohio Capital Journal they have not experienced any security issues related to drop boxes.

Ballot drop boxes are a relatively new phenomenon in Ohio politics. Though some counties have used them for years, it wasn’t until 2020 that an election here featured drop boxes in all 88 counties.

Ohio law neither prohibits boxes nor requires them on any permanent basis.

Lawmakers authorized their use in the 2020 primary election due to the pandemic — allowing each county to have a single box.

Since then, Secretary of State Frank LaRose directed county boards of elections to again make one drop box available for the 2020 General Election and the 2021 Primary Election.

Voters had 24/7 access to them for the duration of the absentee voting period. Likewise, the boxes were monitored 24/7 using video surveillance.

It required a bipartisan team to retrieve the drop box contents, with one Democrat and one Republican each holding respective keys that are both necessary to open the box. All boxes were emptied at least once per day.

The Ohio Capital Journal contacted a number of elections officials across the state to hear about drop box usage in their respective counties.

All of them touted the security of their drop boxes and the safety of voters’ ballots inside of them.

Aaron Ockerman, executive director of the Ohio Association of Election Officials, said he could not identify a single issue with drop box security from any of the 88 counties in 2020. Ockerman noted there had been erroneous reports of vandalism in Lucas County that were proven to be unfounded.

There was an incident in California where an arsonist reportedly dropped a burning newspaper into a drop box there, destroying an estimated 100 ballots. Local outlets reported the ballots were all accounted for and their corresponding voters were sent new ballots to complete.

The Lucas County Board of Elections actually uses two boxes due to its early voting center being at a separate location from the main office. A representative from the office told OCJ the county has never had a problem with the boxes.

Nor has Franklin County.

“We didn’t have any issues with our on site drop boxes last year or at any time I can recall during past election cycles,” wrote Aaron Sellers, the Franklin County Board of Elections’ public information officer, in an email.

Julia Gearheart, director of the Scioto County Board of Elections, said the county was glad to have a box available for absentee voters.

“I think most of our voters are very pleased with it,” she said.

As for the possibility of tampering with ballots, Gearheart said she did not know whether a cherry bomb or similar explosive could fit in the county’s box. With locks and 24/7 monitoring in place, the director said this theoretical not something the office is much concerned about.

“We’ve not had any issue with drop boxes at all,” she said.

The Trumbull County Board of Elections website features a picture of the county’s box with the caption, “Feel safe to use our secure drop box.”

In his testimony, Seitz argued that cameras are not necessarily enough to keep the ballots safe.

“Even with video surveillance, that’s not ironclad either,” he said. “How many times have you read that people come up and shoot out the video camera and then do whatever they’re going to do?”

Drop boxes have often been compared to traditional mailboxes, both in design and usage, though mailboxes do not necessarily have the same security features in place as drop boxes do.

“The availability of secure, monitored drop boxes at BOE offices is a good thing. The Secretary’s proposal to pay for postage on all elections mail effectively makes every (U.S. Postal Service) blue box a free drop box,” a LaRose spokesperson told the Ohio Capital Journal last May.

Ray, a sponsor of the recent elections bill, further testified there is a “drop box at the end of everyone’s driveway.” Ohioans can place their completed absentee ballots inside their mailbox and have it picked up from there, Ray noted.