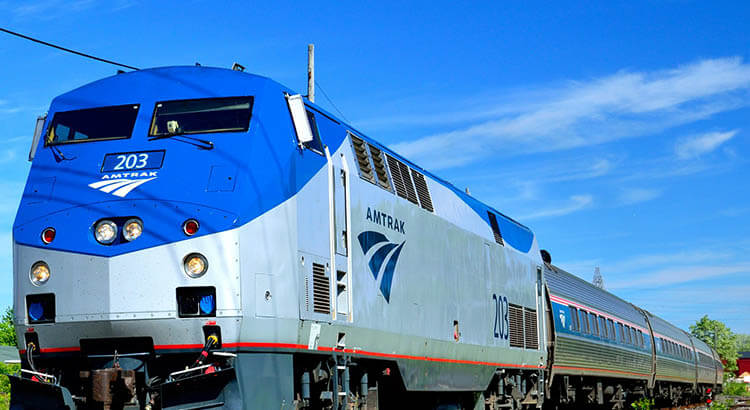 The possibility of expanded passenger rail service in Ohio has some residents brainstorming how it might impact their lives.

A Columbus resident imagines being able to take a train to Chicago, a place they haven’t been “in ages.” A baseball fan from Dayton thinks he’d be able to attend games at Cleveland’s Progressive Field more often. A bicyclist considers the possibility of riding cross-state to another city then taking the train back.

These opportunities would still be years away from taking shape. The Biden administration wants to get the ball rolling on this idea as part of a $2 trillion infrastructure and jobs proposal made public on Wednesday.

The sweeping plan calls for making a variety of improvements to America’s transportation grid. The administration also wants improvements made to drinking water systems; high-speed broadband for all Americans; and rehabbing projects for millions of homes, commercial buildings, schools, hospitals, child care facilities and federal buildings.

President Biden, a longtime Amtrak rider and supporter, wants to invest tens of billions of dollars to build new train routes throughout the country. His plan separately calls for more than $100 billion in spending toward repairing and modernizing other public transit systems.

In order to pay for this infrastructure package, Biden wants to raise the corporate tax rate and prevent companies from writing off expenses accrued from offshoring jobs. 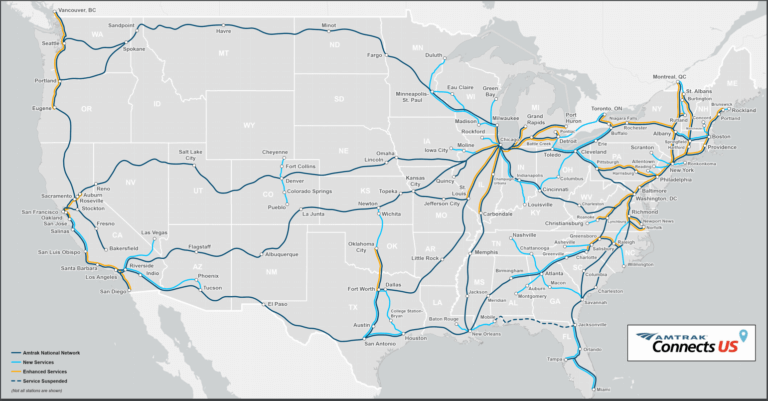 President Biden is proposing a major investment toward expanding passenger rail service throughout the United States. Here is a proposed map for expanded service from Amtrak.

Amtrak has publicized its own “Vision to Grow Rail Service Across America” map with a goal of building new routes to unserved cities within the next 15 years.

Most notably for Ohioans is a proposal to build new Amtrak routes connecting Cincinnati, Columbus and Cleveland. The initial concept is to have three round trips per day, with stations in other communities placed along the route (such as Dayton).

Amtrak currently operates several routes which travel along the north and south edges of the state and its growth plan calls for increasing service along these routes. Additional routes connecting the Ohio’s largest cities would be a significant development, transit advocates and local officials believe.

“This is bold,” said Stu Nicholson, executive director of the transportation advocacy group All Aboard Ohio. “This is a huge, bold move in terms of both infrastructure overall and transportation in particular.”

It has been 40 years since Ohio last saw passenger trains on the “Three-C Corridor.” Bringing it back, Nicholson said, will have major tourism and economic ramifications for the state.

“Three trains a day doesn’t seem like a lot, but it’s three trains more than we have now,” Nicholson added.

How Ohioans think they might benefit from expanded rail service 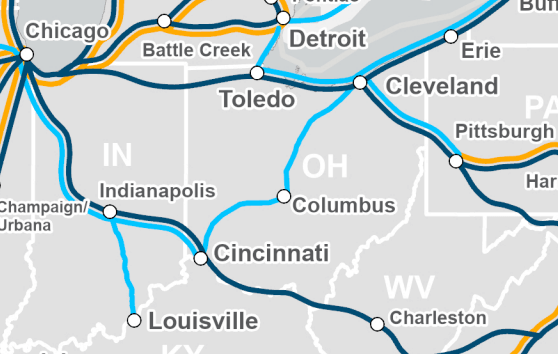 The Ohio Capital Journal sought input from Ohioans on these proposals and asked on social media what they might use expanded passenger rail for.

Andrew Gutierrez, a resident of Cincinnati, said it would help with seeing family members during the holiday season.

“It would definitely make travel less stressful seeing in-laws in Cleveland, especially during the winter,” Gutierrez responded. “Maybe not quicker, but it’s at least an option.”

Leslie Hughes also said she would utilize passenger rail to travel from Franklin County to other states to see relatives.

“As a newly retired person, visiting family by train in nearby states would give me great hope for enjoying my later years,” she said.

Here is a selection of other responses:

My parents are in their 70s and don’t really like driving long distances, so they haven’t been to Columbus to visit me in several years. Train service would let them come up here more easily and comfortably.

I like the idea.
It comes down to the execution – can intercity rail service be a reasonable, affordable, rapid alternative to personal cars or planes.

I’m in the Cleveland are and would love it if there could also be a feeder train to/from Athens and Columbus so that my OU student daughter could come home more.

These infrastructure proposals come as Gov. Mike DeWine signed the two-year, $8.3 billion Ohio transportation budget into law on Wednesday. The governor had originally suggested massive cuts to state funding for public transportation, but lawmakers restored the funding to pre-pandemic levels.

DeWine acknowledged Thursday that “we certainly have infrastructure needs” in Ohio, but said he hadn’t given a full look to Biden’s proposals.

Unlike highways, public transportation has no dedicated revenue stream within the state budget, meaning this investment is dependent on lawmakers’ decision-making every two years when a new transportation budget is approved.

As reported, the funding approved in this budget helps benefit the many urban and rural transit systems throughout Ohio. They will also receive federal relief funding approved by Congress that is meant to recoup losses sustained during the pandemic.

The Ohio Department of Transportation’s 2015 Transit Needs Study outlined that a vastly larger investment into public transit is necessary to fully improve and maintain the state’s transit offerings.

A recent state infrastructure report card from the American Society of Civil Engineers graded Ohio’s infrastructure as being a C-, with the “ Transit” category receiving a D grade.