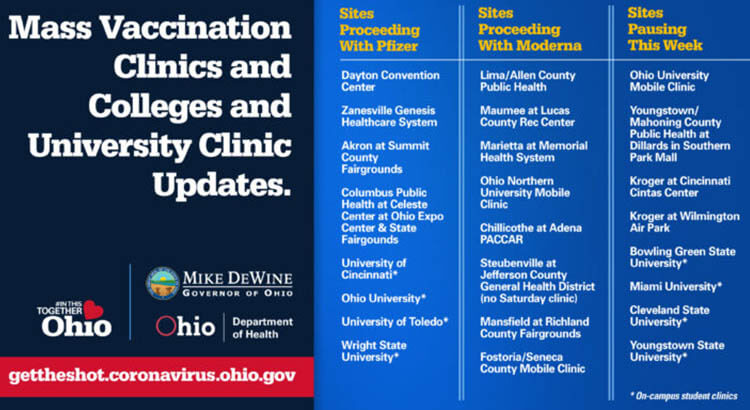 Ohio Gov. Mike DeWine on Tuesday said he was blindsided like everybody else when he learned that federal public health officials were advising that all states should “pause” administration of the Johnson & Johnson coronavirus vaccine.

The U.S. Food and Drug Administration and the Centers for Disease Control and Prevention recommended the pause after six women between the ages of 18 and 48 developed blood clots between six and 13 days of receiving the vaccine. One died and another is in critical condition, the Washington Post reported.

Symptoms of the clotting syndrome are reported to be severe headache, severe abdominal pain and swelling in the extremities.

Health officials need the pause to better understand what’s happening and to educate doctors that if clotting is due to the Johnson & Johnson vaccine, not to prescribe drugs they otherwise might, said Anthony Fauci, chief medical advisor to President Joe Biden. He said the pause would be “more like days to weeks, than weeks to months.”

Susan Koletar, an infectious-disease doctor at Ohio State’s Wexner Medical Center, said that the cause of the clotting is the unanswered “million dollar question.”

“The speculation so far is that it’s an auto-immune event with the system attacking the (blood) platelets,” she said.

Just six cases of the clotting disorder have been detected after more than 6.8 million Americans have received the single-dose Johnson & Johnson vaccine, making the phenomenon “almost the definition of a needle in a haystack,” said Andrew Thomas, chief medical officer at Wexner Medical Center.

So far, 264,000 doses of the Johnson and Johnson vaccine have been administered in Ohio and no cases of the clotting syndrome have been reported.

Jeff Zients, the White House COVID-19 coordinator, said the pause in one vaccine won’t keep health authorities nationwide from administering 3 million doses a day. That’s because the United States has locked in surplus doses of the Moderna and Pfizer vaccines, he said.

“We thought of this as a wartime effort from the very beginning,” he said. “That’s why we purchased extra supply, so we could be ready for every contingency.”

DeWine said that Ohio also has enough supplies to keep up the pace of vaccinations.

“There are plenty of shots open with Moderna and Pfizer,” he said. “We’ve seen in recent weeks a slackening of demand.”

Ohio health officials were asked whether the Johnson & Johnson news might add to the reluctance of Ohioans who were already hesitant to be vaccinated. Such hesitancy is especially worrisome as a faster-spreading variant of the virus rages just north of the Ohio border in Michigan.

Bruce Vanderhoff, chief medical officer with the Ohio Department of Health, said the precautionary actions should show people that systems are in place to make sure vaccines are safe.

“The fact that the CDC and the FDA pushed the pause button should give Ohioans confidence,” he said.

Conversely, some critics said that pausing vaccine administration in the face of such a small number of clotting cases undertakes a huge risk — more slowly vaccinating millions — to avoid a much smaller one.

“Six cases out of 7 million people. What a disaster,” Nate Silver, statistics whiz and editor-in-chief of FiveThirtyEight, tweeted. “This is going to get people killed. And it’s going to create more vaccine hesitancy. These people don’t understand cost-benefit analysis. They keep making mistakes by orders of magnitude.”

6 cases out of 7 million people. What a disaster. This is going to get people killed. And it’s going to create more vaccine hesitancy. These people don’t understand cost-benefit analysis. They keep making mistakes by orders of magnitude. https://t.co/DQdvqoujHR

Some health officials answered, however, that beyond calculations of relative risk was the important goal of maintaining faith in vaccine science through transparency.

One unwelcome consequence of Tuesday’s news is that it thwarted an effort to vaccinate Ohio college and university students with the Johnson & Johnson product before they return home at the end of the current term. DeWine said the effort was mostly complete, but some of the largest institutions hadn’t finished.

“It’s not exactly what we wanted, but we accomplished a lot,” he said.