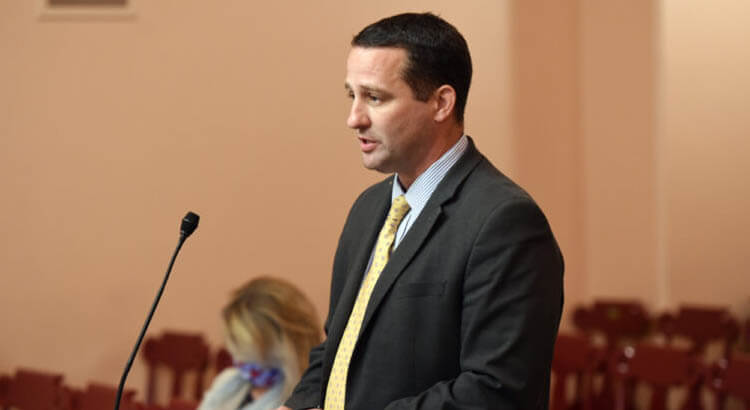 To Ohio lawmaker Kris Jordan, the mask requirement and the roll out of optional COVID-19 vaccines are two steps toward an American genocide like that of the Holocaust during World War II.

“It’s just a mask, wear it. It’s just a shot, take it,” reads a March 31 Facebook post from Rep. Jordan, a Republican from Delaware County, who forewarned a slippery slope from pandemic mitigation to mass extermination.

“It’s just a boxcar, get in,” the post concludes. “Every step away from freedom is a step closer to dictatorship.”

Josh Mandel, a Republican candidate for U.S. Senate, recently made a similar reference in criticizing “vaccine passports” — a program being considered by businesses, airports and governments that would admit someone to a public place only if they have been vaccinated.

“We’ve seen this before…,” Mandel tweeted.  “Nazi Germany also registered citizens. Our Liberty is under attack!”

Let me get this straight – during Covid @Walmart was allowed to stay open while small biz had to shutdown, some permanently. And now @Walmart is pushing for a “Vaccine Passport”?!?

We’ve seen this before… Nazi Germany also registered citizens. Our Liberty is under attack!???????? pic.twitter.com/i0XgBkCzcR

Mandel, who is Jewish, lambasted a gun violence prevention proposal from President Biden three days later by tweeting, “Hey @JoeBiden, before you send in the Gestapo you might want to reflect on this: The 2nd Amendment is to defend the 1st Amendment and to protect us from government tyranny.”

Howie Beigelman, the executive director of Ohio Jewish Communities, said his organization has seen more inappropriate comparisons of the Holocaust over the past year than in the several years leading up to the pandemic. Some who view the pandemic through the lens of personal freedom may be inclined to take a debate over policy to extreme levels, he suggested.

“We’re happy to have a policy discussion about (COVID-19),” Beigelman said, “but it doesn’t make it OK to just immediately jump to ‘This is Nazi Germany.’ It’s not. It never is. It doesn’t matter who the president is, the governor is, which party it is. There’s never a reason in America in 2021 to make those comparisons.”

James Pasch, regional director for the Anti-Defamation League’s Cleveland office (which serves all of Ohio), said it is wrong for any public official to make a comparison between health restrictions and the Holocaust.

“Anyone who makes that analogy dishonors the memories of those that were murdered by the Nazis,” Pasch said. “Period.”

The Ohio Capital Journal contacted Jordan’s legislative office and Mandel’s campaign to ask of their justifications for invoking Nazi Germany in expressing disagreement with COVID-19 policies.

In a provided statement, Jordan responded: “As President Ronald Reagan once said, the nine most terrifying words in the English language are: I’m from the Government, and I’m here to help. I believe that Americans should pay attention to history. And there are unfortunately, more than a few, bad chapters in the collective history books. Our freedoms must never be taken for granted, and it is our duty to stay vigilant as our sacred rights have slowly but surely been chipped away at during the pandemic. I stand ready to preserve and protect those very freedoms.”

Scott Guthrie, the campaign manager for Mandel, offered this provided statement: “Josh is a proud American, proud Marine and proud Jew. As the grandson of Holocaust survivors, Josh has been involved with Holocaust remembrance his entire life and he’s not going to stop speaking truth to power.”

Not the first time

There have been waves of criticism against the Ohio government’s response to COVID-19 over the past year, though most of it has dealt with issues of policy and constitutionality.

But some have gone further.

State Sen. Andrew Brenner, R-Powell, wrote on Facebook last April that he would not allow Dr. Amy Acton, then the Jewish Ohio Department of Health director, to turn Ohio into Nazi Germany. Brenner faced backlash for the comment, which he later apologized for.

Beigelman said at the time that Holocaust misattribution by public officials happens frequently enough that his organization has a “protocol” on how to how to handle these situations.

Shortly after, state Rep. Nino Vitale, R-Urbana, referred to Acton as a “Globalist Health Director.” The term “globalist” has been used as an anti-Semitic slur, according to the Anti-Defamation League.

As with those examples, Beigelman has reached out to Jordan and Mandel seeking to have a private dialogue about the hurt their comments can cause.

Also last spring, an Ohio man appeared at a Statehouse protest of COVID-19 lockdowns with an anti-Semitic sign that included the words, “The Real Plague.” Weeks later, that man was reported to have allegedly entered a convenience store with a hatchet and sword, seeking directions to Kent State University to “find some Jews” there, the Cleveland Jewish News reported.

A different man attended a protest at Acton’s house with a sign referencing a Bible verse detailing how Jesus sought to avoid Jewish leaders who might kill him.

Both Jordan and Mandel have a history of making controversial statements on social media.

Jordan has claimed numerous times since last November that the 2020 election was stolen from Donald Trump.

“Joe Biden has performed theft if (sic) office for most of his career,” Jordan wrote a day before the election was called for Biden, “now he’s performing theft of office!”

On Dec. 11, Jordan wrote: “You can vote your way into Socialism (or have it stolen).. But you will have to shoot your way out of it… Molan Labe… Patriots….”

Molon labe is a Greek phrase used by pro-gun advocates meaning “come and take them,” referring to weapons. A day after the U.S. Capitol insurrection on Jan. 6, Jordan edited the December post to take out the Molon labe reference.

The evening of the insurrection, Jordan suggested the people who stormed the U.S. Capitol were “plants.” He later deleted the post.

While campaigning for U.S. Senate in 2017, Mandel criticized the Anti-Defamation League and aligned himself with a pair of right-wing figures who had spread the unfounded Pizzagate conspiracy theory.

Mandel deleted all of his past tweets before announcing another campaign for the U.S. Senate in February. Mandel received a 24-hour ban on Twitter in March for posting a poll asking which types of “illegals” would commit more crimes: “Muslim Terrorists” or “Mexican Gangbangers.”

The candidate did the reverse this past weekend. On Saturday, Mandel tweeted in frustration about his latest social media infraction: A 30-day ban from Facebook.