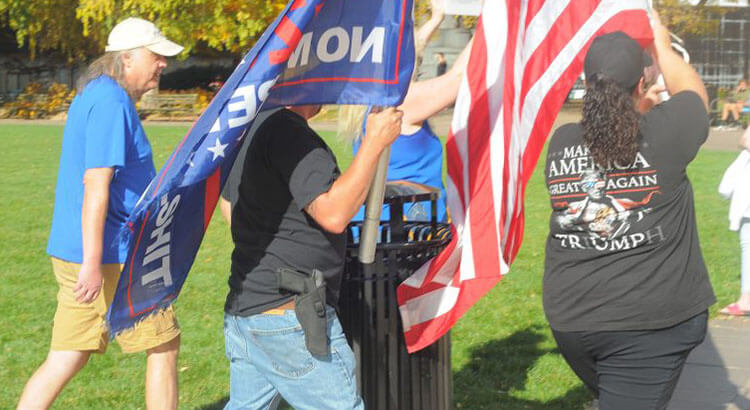 A man is seen with a holstered pistol at a demonstration outside the State Capitol after networks called the presidential election for Joe Biden. Photo by Jake Zuckerman.
ShareTweet

Organizers announced plans to delay a rally planned for Saturday to give a special honor to a police officer who recently shot and killed a Black 16-year-old girl.

Chris Dorr, executive director of Ohio Gun Owners, obtained a permit for a “Back the Blue Rally” at the state Capitol on Saturday, claiming 400 people would attend.

According to Dorr, speaking in a Facebook video, Ohio Gun Owners requested barrier fencing near High Street to stave off “antifa, disruptors, [and] agents provocateur.”

He alleged that the Capitol Square Review and Advisory Board, which issues permits for political rallies at the Statehouse, refused to allow the fencing. In an interview, he said he canceled the event because the lack of fencing posed a threat to the safety of demonstrators.

Ohio law allows the open carry of firearms. Through the pandemic, political rallies have been rife with heavily armed cohorts. In January, one rally at the Ohio statehouse devolved into fistfights between Black Lives Matter activists and the Proud Boys, an extreme right-wing political group with a history of fistfights with liberal activists and the subject of a federal prosecution for their members’ prominent roles in the Jan. 6 insurrection in Washington D.C.

“We’re showing up to back the brothers in blue, our law enforcement, people like [Columbus Police officer] Nicholas Reardon who did what they did,” Dorr said.

“We have to allow antifa and Black Lives Matter and some of these violent protesters into our event? And they have equal right to stand there and say what they want to and antagonize our members and our supporters and all the people there to back the blue?”

Reardon, a white officer, arrived in a Columbus driveway April 20 after dispatchers received a call about someone being physically threatened, according to the Associated Press. Reardon approached a scene involving Ma’Khia Bryant, a Black teenager, swinging a knife at another girl or woman who fell backward. She then lunged at another woman when Reardon fired four shots, killing the teenager. A state investigation is ongoing.

Bryant was the eighth person killed in Columbus by law enforcement since January 2020, according to the Columbus Dispatch.

Dorr told Jo Ingles of the Statehouse News Bureau earlier this week that Reardon was slated to receive a “special honor” at the event.

A representative with the Capitol Square Review and Advisory Board declined to provide her name or answer specific questions.

“They chose to cancel their event, I’m not sure the reason,” she said.