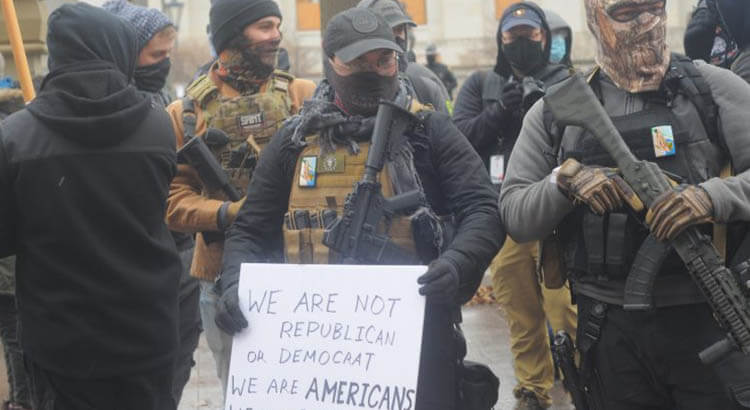 Armed men identifying themselves with the Boogaloo Movement stand outside the Ohio Capitol Jan. 17. Photo by Jake Zuckerman/OCJ.
ShareTweet

Cincinnati tried to ban use of the mechanical attachments, designed to increase rifles’ rates of fire, in 2018 after a shooter used one during a 2017 massacre in Las Vegas that left 58 dead.

The city has no legal right to set its own gun laws, appellate judges ruled.

Cincinnati’s efforts met the same fate as those of Cleveland, Cleveland (again), and Clyde when they tried, amid a rising tide of mass shootings in the U.S., to pass their own gun violence prevention measures.

The cities’ legal failures trace back to a powerful state law, passed in 2006 and strengthened twice since, which preempts cities from regulating guns. Forty-three states have similar laws on the books, according to the Giffords Law Center to Prevent Gun Violence.

When it comes to guns, the law essentially trumps language in the Ohio Constitution giving cities authority to govern themselves.

The cities’ ordinances mirror a legislature moving in the opposite direction over the past 20 years. In that time, state lawmakers passed a “stand your ground” bill removing the requirement to retreat before responding to an attack with deadly force; created a concealed carry program in 2004 and later decreased training requirements; and expanded the list of places where Ohioans can carry concealed weapons.

On April 9, 2005, Bruce Beatty, who was licensed to carry a concealed weapon, was cited for carrying a firearm in a Toledo park in violation of city law. He challenged the statute, claiming it conflicted with the state’s licensing program.

The trial court and the 6th District Court of Appeals upheld Toledo’s right to ban guns at its parks.

However, as the case moved through the courts, the General Assembly went on to pass House Bill 347, which essentially withheld the right to restrict gun laws to the state and federal government. Gun rights advocates said the law is necessary to prevent a labyrinth of patchwork gun regulations around the state.

Republican Gov. Bob Taft rejected the proposal, stating in a veto message that the “vast prohibition of local control is unwarranted and fails to consider the challenges and circumstances” from communities around the state.

The veto was overridden by fellow Republicans, some of whom are now at the pinnacle of state politics, including (by their current titles): Congressmen Bob Gibbs, Bob Latta, and Jim Jordan; former state GOP Chairman Kevin DeWine; Lt. Gov. Jon Husted; and state Auditor Keith Faber.

“Simply put, the General Assembly, by enacting [the pre-emption law], gave persons in Ohio the right to carry a handgun unless federal or state law prohibits them from doing so,” wrote Justice Terrence O’Donnell in an opinion after the law passed.

“A municipal ordinance cannot infringe on that broad statutory right.”

Clyde, a small city of 6,100 in Sandusky County, quickly learned the limits of its political power when it tried to ban guns at its city parks.

In a dissenting opinion, then-Chief Justice Thomas Moyer said if the goal of the law is to avoid inconsistency, why does it allow private property owners to ban guns but not governments managing public spaces? Justice Paul Pfeifer made a similar point specifically about differences between a city park and a private park owned by Whirlpool Corp.

“Is there any reason why the owner of this property, where families gather and children play, should be forced to allow people with guns to enter, while the private owner of a public space such as a shopping mall can bar from entry gun carrying citizens?” he wrote.

In 2010, the city of Cleveland, which had several laws on the books regulating guns beyond state law, challenged the statute. Once again, the Ohio Supreme Court upheld the preemption law.

Cleveland tried again in 2015, passing an ordinance to create a gun offender registry and a sweep of other reforms aimed at addressing gun violence. Judges on the 8th District Court of Appeals ruled against the measure. The state Supreme Court declined to take up the case.