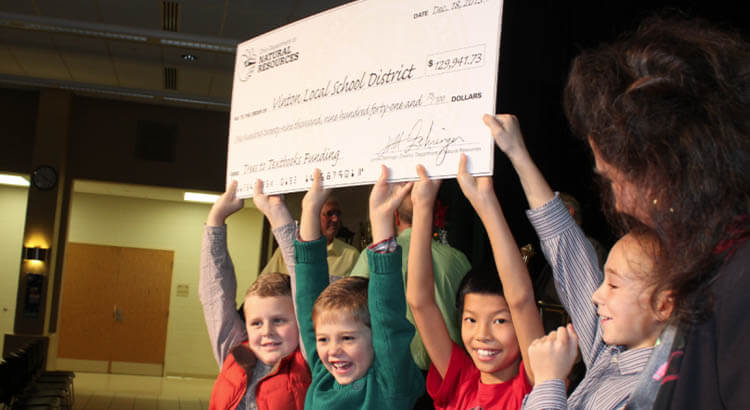 Students at a Vinton County elementary school are seen during a Trees to Textbook check presentation in 2015. File photo from district.
ShareTweet

School administrators and teachers unions praised the inclusion of a public school funding formula as part of the proposed state budget, but see other areas that could be improved or even removed.

The budget bill passed by the Ohio House this week includes folds in the funding bill that’s been running through a House committee as a standalone bill, and which has been in the works for years.

The six-year phase-in of the funding formula includes annual spending of nearly $2 billion per year, but places the burden of funding schools more directly on the state, and allows for more study of the true cost of individual districts to educate students.

Melissa Cropper, president of the Ohio Federation of Teachers, said the group supported House Bill 1, the standalone school funding bill, but they are still evaluating the elements of it placed into the budget bill. Their motivation remains the same.

“Ohio children have already waited too long for a school funding formula that lives up the state’s constitutional responsibility to fairly and fully fund local public schools,” Cropper told Thursday’s meeting of the Senate Primary and Secondary Education Committee, who is now reviewing the budget.

The Legislative Service Commission estimates the statewide average base cost per pupil will be $7,202.

Regarding the EdChoice private school voucher program, direct state payments will be made, rather than under the current system, where deductions are taken from the public school district where the student is a resident.

The use of public school funds to pay for a student’s attendance at a private school has been a constant source of controversy, adding conflict to an already polarizing funding formula debate.

Among the many other parts of the education budget proposal, school administrators targeted funding for economically disadvantaged students as a point in need of improvement.

Under the proposal for traditional public schools, the base amount per student for disadvantaged pupil impact aid (DPIA) will increase from $272 to $422, and student wellness and success (wraparound funds used for non-academic purposes) can be spent for “certain initiatives.”

But the requirement that districts partner with specific entities to decide on how the money should be spent was one of the issues Katie Johnson, of the Ohio Association of School Business Officials, said should be changed.

“Instead, we believe that districts should be provided with the flexibility in determining how best to meet the needs of their students and with which entities they will partner in meeting those needs,” Johnson told the Senate committee on Thursday.

As it stands, DPIA plans would be decided in coordination with a board of alcohol, drug and mental health services, along with a member of an educational service center, community-based mental health treatment provider, local board of health, or other similar groups.

Johnson also said the provision included in the budget that would prohibit the use of public transportation as a way for students to get to school should be removed, as it would “remove a resource that has been available to public schools since transportation was first mandated.”

“While, in a perfect world, we would like all students to have access to a yellow school bus, there are simply not enough yellow school buses or school bus drivers available to meet that demand,” Johnson said.

For some of the same accessibility and resource reasons, some education officials took issues with a provision of the proposed budget regarding computer science education.

The budget orders the Ohio Department of Education to establish a committee to develop a state plan for primary and secondary computer science education, phasing in a requirement that all K-12 students have access to a course by the 2024-25 school year.

Scott DiMauro, president of the Ohio Education Association, said this topic should be broken out of the budget discussion for its own standalone bill, because of the “many barriers to making this proposal a reality.”

DiMauro and Kevin Miller, executive director of the Buckeye Association of School Administrators, both expounded on the lack of funding and staffing that is needed to implement such a program in Ohio schools.

DiMauro listed the barriers he saw for a statewide computer science implementation: “Adequate staffing and training, lack of resources to pay for the computers and software needed to participate in the program, broadband challenges and accessibility, (and) impacts on an already crowded curriculum.”

The proposal allows for online computer science courses from “educational providers” approved by the ODE, but DiMauro said this should be a rigorous process, with only non-profits accepted as providers of the courses.

“No one should profit off the state’s lack of resourcing to kids and local public schools,” DiMauro said.