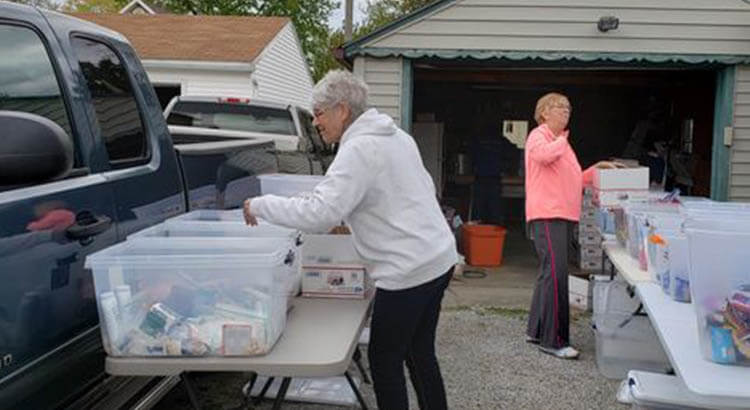 Tiffin, Ohio — The Seneca County Board of Commissioners heard from Carrie Duncan, of a Splash of Love from Home, Thursday morning.

Duncan’s organization was formed in 2019 as a way to do something for American soldiers deployed in countries across the world. The group uses volunteers and donations to send care packages and messages of encouragement to troops overseas.

The group has sent more than 200 packages since its inception. Duncan said she came up with the idea for the organization after hearing about many veterans committing suicide. In 2019, the VA released its National Veteran Suicide Prevention Annual Report, which stated that the suicide rate for veterans was 1.5 times the rate of non-veteran adults. Duncan also recalled how poorly her brother was treated after returning from his military service in Vietnam.

“It broke my heart,” she said.

Duncan said the group is outgrowing its space for assembling the care packages, and she shared some photos of a recent event in her garage. She asked the commissioners if anyone had any ideas of a larger space the organization could use to continue its mission.

Audrey Flood, of Tiffin-Seneca Economic Partnership, who helps handle community development for the city of Tiffin, agreed to work with Duncan to provide ideas for some potential spaces.

In other business, Sheriff Fred Stevens visited the commissioners to provide an update and request funding for additional personnel.

On April 1, the commissioners agreed to up their financial commitment to the sheriff’s office by approving a request from Stevensto purchase four vehicles. The $135,000 supplemental appropriation also will cover the necessary equipment for the vehicles. This funding was on top of the initial $60,000 budgeted for two vehicles.

Stevens said Thursday the office also has personnel needs. He said at times, there are only two deputies in the road across the 553 square miles of the county. Overall, he said there are just 13 deputies that work regularly on the road.

Stevens’ overall request, which also includes equipment, uniforms and more, would create an estimated expense of $478,361.80. The request would include the hiring of one captain, four deputies and a dispatcher.

In other action, the commissioners received one bid for a van on behalf of the Seneca County Opportunity Center. The $39,965 bid, from Transportation Equipment Sales Corp. of Oregon, OH, was for a 2020 Dodge Caravan with a rear entry ramp and wheelchair tie-down.

She discussed several initiatives, including the Creating Entrepreneurial Opportunities program. The new program will connect students with local business leaders and will give them a hands-on opportunity to learn about entrepreneurship. The program is currently searching for a facilitator and is accepting applications for students. To learn more, visit www.SenecaCountyCEO.com.