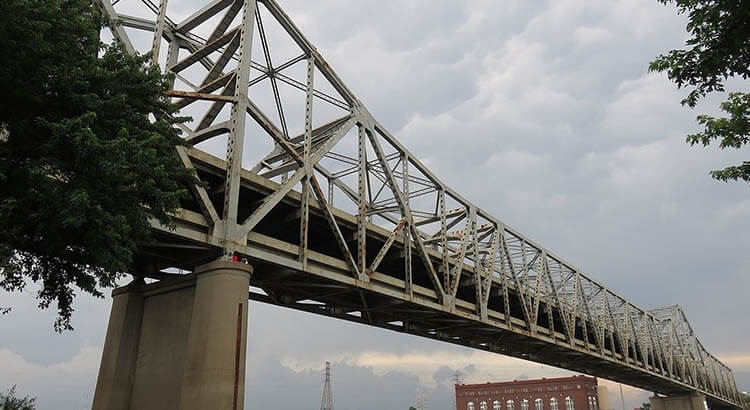 Only about 20 feet long, the bridge overtop Turkey Fork Creek aids residents of this very rural area in Southern Ohio reach the closest stores, restaurants and school buildings in nearby Coal Grove and Ironton. First built in 1940, around 100 vehicles pass over the bridge each day.

Inspectors have deemed the bridge’s surface and overall structure to be in poor condition.

There are 1,376 other bridges in Ohio found to be “structurally deficient,” according to the most recent inspections from 2020. Most of them are in rural areas like the one on Sugar Creek-Johnstown Road, but hundreds more are in urban areas with much greater numbers of Ohioans traveling over them every day.

On a daily basis, more than 100,000 vehicles cross two structurally deficient bridges on busy Route 90 in the Cleveland area.

The Biden administration has identified bridge repair as one key component of its “American Jobs Plan,” a sweeping infrastructure package with $2 trillion in proposed spending.

There are a little over 27,000 total bridges in Ohio, ranging from massive highway overpasses to the smallest bridges on rural roadways.

The Ohio Department of Transportation inspects bridges on the state highway system, while county engineers are generally responsible for inspecting bridges on county and township roads.

Ohio law has required yearly inspections of bridges, but this will soon change. The transportation budget signed into law in March will allow some bridges to be inspected every two years going forward.

ODOT Director Jack Marchbanks Jr. testified to lawmakers that the yearly inspection requirement is “not a prudent use of taxpayer resources.” Instead, the new inspection schedule will allow for newer bridges to be inspected every two years, with a goal of dedicating more resources each year to bridges in worse shape.

Here is a map of where the 1,377 structurally deficient bridges are located, with darker shaded counties having more of them:

President Biden’s infrastructure plan calls for a $115 billion increase in spending toward U.S. bridges most in need of repairs.

This includes fixing the “ten most economically significant bridges in the country,” as well as 10,000 smaller bridges. Among the large bridges seen as a possible project for the first category is the Brent-Spence bridge connecting Ohio and Kentucky in Cincinnati.

“Decades of declining public investment has left our roads, bridges, rail, and transit systems in poor condition, with a trillion-dollar backlog of needed repairs,” a White House summary of the infrastructure plan reads.