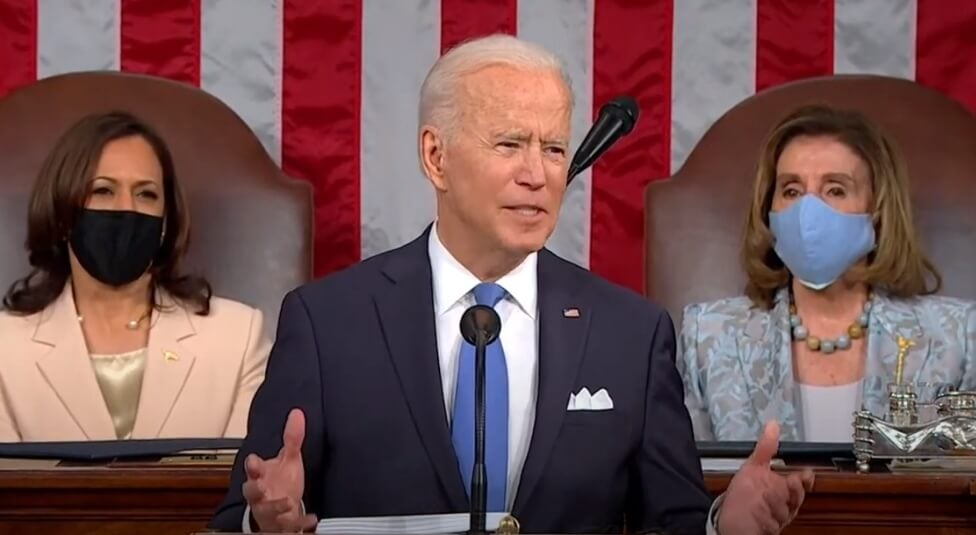 Standing in the same U.S. House chamber where a violent mob temporarily disrupted the certification of his victory, President Joe Biden on Wednesday heralded the country as “on the move again” as he sketched out his expansive vision for a post-pandemic America.

Biden in his first address to a joint session of Congress touted quick results from the massive relief package enacted last month to help heal lingering economic wounds from the pandemic.

But that $2 trillion fiscal infusion is not enough to gear up the U.S. to compete in the 21st century, he argued, offering a sales pitch for a pair of sweeping policy proposals to expand access to education, reduce the cost of child care, and overhaul the nation’s infrastructure systems.

He defended the more than $4 trillion combined price tag of those plans as a “a once-in-a-generation investment in America itself,” likening it to the spending that produced the transcontinental railroad, interstate highway systems, and scientific breakthroughs enabling new vaccines. Those plans would be paid for in part by raising taxes on the wealthiest Americans.

“These are the investments we make together, as one country, and that only government can make,” Biden said. “Time and again, they propel us into the future.”

But many of these items, as well as his $4 trillion in proposals, face long odds in a Congress where Republicans have been skeptical of or hostile toward bipartisanship. There’s also little room for Democrats to lose votes due to their slim majorities controlling the House and Senate.

“Despite campaigning on a platform of unity, President Biden has put forward a tax-and-spend agenda the likes of which we have never seen with virtually no Republican input,” said Rep. Bill Huizenga, (R-Mich.).

Democrats largely praised Biden’s tone as well as his calls for policy action.

“It was a wonderful appeal to America to continue to fight through the pain,” Sen. Jeanne Shaheen, (D-N.H.), told a pool reporter. “I thought he had some really excellent calls to action, and certainly laid out a plan for how we’re going to compete.”

Tonight we heard President Biden deliver a message of hope to the American people.

In the first 100 days, we took bold action to help Ohioans recover.

Now we work to build on that success, with historic investments in the people who make this country work.

A presidential address to a joint session of Congress is an annual occurrence. But as with his inaugural speech, Biden’s view from the podium was anything but typical.

Instead of a standing-room-only crowd of some 1,600 lawmakers, Cabinet members, Supreme Court justices, staffers, and guests, there were just 200 people in the House chamber to allow for physical distancing and other pandemic precautions.

All had to wear a face mask, and show either proof of vaccination or a negative COVID-19 test.

The sparse attendance led to a muted but respectful response to the president’s speech. But with fewer lawmakers packed in the chamber, it was easier to spot subtle reactions to certain lines, such as Rep. Lauren Boebert, (R-Colo.), shaking her head in disagreement as Biden gave a lengthy call for more lawmakers to support expanded gun background checks and a ban on assault weapons and high-capacity magazines.

“I thought it was gonna be kind of sad, but it wasn’t,” said Sen. Amy Klobuchar, (D-Minn.). “I thought it was actually a very intimate feeling… It didn’t quite have that highly partisan, charged feeling like you do when it’s all filled.”

Another change? For the first time, the two officials seated behind Biden were both women: Vice President Kamala Harris, and Speaker Nancy Pelosi, (D-Calif.), who bumped elbows to greet each other at the rostrum.

“Madame Speaker. Madame Vice President,” Biden said as he opened his speech, drawing cheers. “No president has ever said those words from this podium, and it’s about time.”

Afterward, instead of striding directly back to his motorcade, Biden lingered to chat with the mostly Democratic lawmakers who quickly encircled him for a quick comment or fist bump.

Members of Congress who were invited to attend were assigned specific chairs labeled with their names, with several empty seats between lawmakers. According to pool reports and camera shots of the audience, attendees included:

Some of those lawmakers were seated in the House gallery, where guests of the first lady also typically would have been seated. Instead, first lady Jill Biden held a virtual event Wednesday afternoon with individuals tapped to highlight key policy themes.

They included Javier Quiroz Castro, a doctor and undocumented immigrant who grew up in Tennessee after his parents brought him from Mexico at 3; Maria-Isabel Ballivian, who heads a child-care center in Virginia; Wisconsin gun-control activist Tatiana Washington; and Theron Rutyna, who has been leading the effort to get broadband to tribal lands in Wisconsin.

The Republican response to Biden’s speech was delivered by U.S. Sen. Tim Scott of South Carolina, who echoed other GOP critics in accusing Biden of not working enough with Republicans. “A president who promised to bring us together should not push agendas that tear us apart,” said Scott.

Biden’s remarks came on his 99th day in office, later than modern presidents have typically given this address.

He described “a nation in crisis” in January, citing the public health and economic challenges, along with the Jan. 6 riot, which he called “the worst attack on our democracy since the Civil War.”

Now, a little more than three months into his term, Biden described the country as making strides in “turning peril into possibility, crisis into opportunity, setback into strength.”

He pointed to early wins for his new administration: more than 220 million COVID-19 shots, and approval of the American Rescue Plan, which passed Congress with no Republican support.

Biden called for building upon that proposal through two major packages of legislation. One is a $2.3 trillion plan for overhauling the nation’s traditional and less-traditional infrastructure systems, which he described as “a blue-collar blueprint to build America.”

He framed creating those infrastructure jobs as a way to hire Americans in roles that can’t be outsourced, as well as linked to the broader effort to combat climate change.

“There’s no reason the blades for wind turbines can’t be built in Pittsburgh instead of Beijing,” Biden said.

To pay for it, he is calling for a tax increase on the wealthiest 1% of Americans, which he pledged would not increase taxes on anyone making less than $400,000 a year. His plan also would alter corporate taxes and tax rates for capital gains.

“What I’ve proposed is fair. It’s fiscally responsible. It raises the revenue to pay for the plans I’ve proposed that will create millions of jobs and grow the economy,” Biden said.

Heading off critics, Biden said he and his administration “welcome ideas” on how to shape the details of these proposals, but that disagreement cannot lead to permanent inaction.

Much of the immediate reaction to his speech fell along partisan lines.

Warnock praised what he called “bold solutions” from Biden, saying he was excited to hear the president talk about “investments to keep our state and nation moving forward.”

“The grace and decorum we expect from President Biden was on full display this evening,” said Rep. Marcy Kaptur, (D-Ohio), saying he “clearly articulated the many successes of his first 100 days and his vision to get the pandemic under control.”

In a video response, Sen. John Kennedy, (R-La.), said he was “disappointed” in the message he heard, which Kennedy said shows “the president believes that government made America great. He is so wrong.”

After his sales pitch to Congress, Biden’s next step is hitting the road. On Thursday, he’ll head to Georgia for a drive-in car rally, where he’ll expand his public-relations effort on what his administration has done and the proposals they’re urging from Congress.

Before that event, he’ll be making a side stop to visit someone who understands what it feels like to spend 100 days in the Oval Office: former President Jimmy Carter.