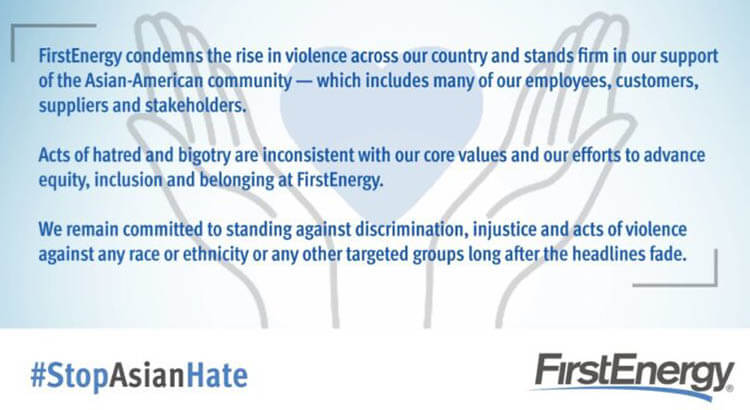 There has been a terrifying surge in violence against Asians over the past year, prompting one Ohio company to take a stand on an issue it was arguably on the other side of in 2019.

Meanwhile, Ohio’s lieutenant governor is digging in over comments he made last week.

There has been a drumbeat of random violence against Asians throughout the coronavirus pandemic.

Earlier this month, a man went on a shooting rampage in the Atlanta area, killing eight. Six of those victims were Asian women. Then on Monday, sickening surveillance footage showed a man in New York kicking a 65-year-old Asian woman in the stomach and then twice kicking her in the head and saying “you don’t belong here.”

The attacks are part of an alarming trend. Nearly 3,800 instances of anti-Asian hate — most of them verbal — were reported to Stop AAPI Hate over the past year. The organization said many more unreported incidents have undoubtedly taken place.

Researchers have linked the increase in anti-Asian hate to former President Donald Trump’s rhetoric regarding the coronavirus. He repeatedly referred to it as the “China virus” and the “Kung flu.”

“FirstEnergy condemns the rise in violence across the country and stands firm in our support of the Asian-American community — which includes many of our employees, customers, suppliers and stakeholders,” the company said in a tweet.

On this Virtual National Day of Action and Healing, the FirstEnergy family comes together to #StopAsianHate. pic.twitter.com/NnUy5Q1yUM

As Dave Anderson of the Energy and Policy institute flagged over the weekend, that’s a far cry from the tone of FirstEnergy-financed advertising during the 2019 fight over House Bill 6 — a $1.3 billion energy bailout that morphed into one of the biggest corruption scandals in Ohio history.

After Gov. Mike DeWine signed the bailout law, FirstEnergy and related interests funded a furious fight to stop a citizen initiative to repeal it. Much of the campaign consisted of bogus claims that the repeal effort was really a Chinese conspiracy to take over Ohio’s power grid. Some of the rhetoric in the million-dollar campaign might even have surpassed Trump’s.

“They took our manufacturing jobs,” one spot ominously opens. “They shuttered our factories. Now they’re coming for our energy jobs. The Chinese government is quietly invading our electric grid.”

As the ad makes these assertions, it flashes video of Chinese President Xi Jinping at a Communist Party function.

In another ad meant to scare Ohioans from signing the petition to repeal the bailout, the FirstEnergy-funded effort again falsely linked bailout opponents to China.

“Warning!” it said. “Don’t give your personal information to the Chinese government. Don’t sign their petition allowing China control over Ohio.”

Asked about the contrast between the stance FirstEnergy took last week and the advertising campaign it helped fund in 2019, a spokeswoman said that the company is under new management.

“FirstEnergy’s new leadership team is fully committed to diversity and inclusion and condemning violence and discrimination against Asian Americans,” the spokeswoman, Jennifer Young, said in an email. “We stand behind our statement and will continue to support and foster a workplace and world where all races, ethnicities and other targeted groups are valued and respected.”

Indeed, in October the company fired CEO Chuck Jones and other top executives after an internal investigation found that the company had made a $4 million payment to DeWine’s appointee to Ohio’s utility regulator just before the HB 6 fight heated up.

As FirstEnergy works to move past the rhetoric of 2019, Ohio’s lieutenant governor is digging in on rhetoric from last week.

On Friday, as FirstEnergy was denouncing anti-Asian violence, Lt. Gov. Jon Husted tweeted a story about Robert Redfield, former director of the U.S. Centers for Disease Control and Prevention. Without providing evidence, Redfield claimed that the coronavirus had escaped from a laboratory in Wuhan, China — a claim the World Health Organization called “extremely unlikely.”

Despite that information being in the Axios story, Husted tweeted the story with the question, “So it appears it was the Wuhan Virus after all?”

So it appears it was the Wuhan Virus after all?https://t.co/zmimtlZ9Ev

Ohio Sen. Tina Maharath, D-Columbus, is the daughter of Laotian refugees. She told the Associated Press that Husted’s comments echoed Trump’s and only aggravated anti-Asian sentiment.

“I was just pointing out that this is an international crisis, in my opinion, that the Chinese government is responsible for and I wanted an independent investigation,” he told the AP. “So I wasn’t trying to accomplish anything that the political left or political right thinks that I might have from that tweet other than to draw attention to the issue.”

In an article in the prestigious journal Nature Medicine, virologist Angela L. Rasmussen said that the “virus probably evolved in a bat host until an unknown spillover event into humans occurred.”

She called claims that the pandemic started with a laboratory accident or intentional engineering “outright ridiculous conspiracy theories.”

As for placing blame for the pandemic on government responses, there seems to be plenty of that to go around.