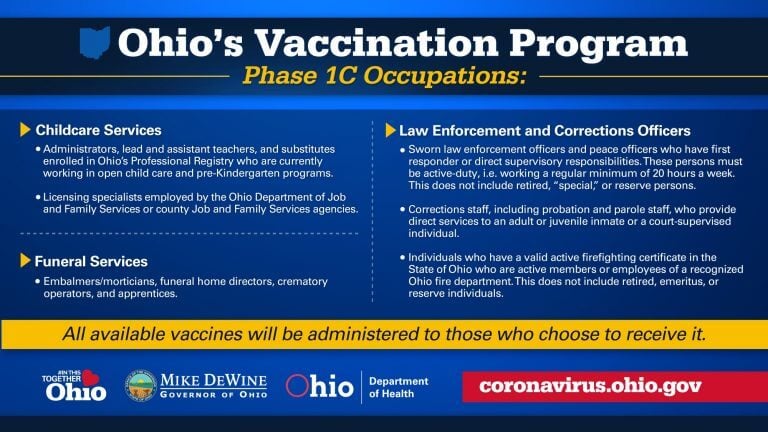 Ohio is seeing another big jump in the number of doses of coronavirus vaccine coming into the state. That’s allowing another large group to become eligible to receive it.

However, one group — the incarcerated — won’t be.

Gov. Mike DeWine on Monday announced that 96,000 doses of the newly approved Johnson & Johnson vaccine will come to the state this week. At the same, the number of vaccines from Moderna and Pfizer are increasing another 14%, bringing the total number of doses this week to 448,000.

That’s nearly three times the amount the state was receiving in early February.

DeWine hailed the increases, but he warned that people need to be vaccinated quickly because more communicable variants of the virus could become dominant in Ohio as soon as the end of the month.

“We know this is a race against time,” he said. “We know that this virus can get a lot more contagious very quickly.”

To increase the number of vaccinations, Ohioans over 60 will be eligible for vaccinations starting on Thursday. So will those with a number of health conditions, including Type 1 diabetes, ALS and pregnancy.

So, too, will be people in several lines of work: childcare, funeral services, law enforcement and corrections officers.

Those who work with the 44,000 state prison inmates have been in the crosshairs of the pandemic. The Ohio Department of Rehabilitation and Correction reports that 4,659 corrections workers have contracted coronavirus and that 10 have died. It also says 85 staffers currently are positive.

But inmates, who are not receiving priority, have fared worse. A chart published by the corrections department doesn’t report how many have tested positive, but it says there have been 134 confirmed prisoner deaths due to covid.

DeWine explained that inmates who are eligible for vaccination because of their age or health can get one, but they won’t receive priority by virtue of their confinement. He said vaccinating staff should help mitigate their risk.

“The virus comes into the prison by the people who work there,” he said. “By vaccinating these individuals, that lessens the chance that the prisoners themselves will get it.”

The release of the Johnson & Johnson vaccine raises new questions for DeWine and his team to answer.

It only requires a single dose and it’s much easier to store than the two already available. So it might make sense to deploy it among harder-to-reach populations or people who are less likely to show up for a second dose.

DeWine said he is still considering the matter.

In clinical trials, the Johnson & Johnson vaccine appeared to be somewhat less effective than its two-dose counterparts in preventing moderate cases of covid, although it’s hard to make a direct comparison. But Bruce Vanderhoff, chief medical officer with the Ohio Department of Health, pointed out that the new vaccine has been shown to be very effective in keeping people “out of the hospital, out of the ICU and out of the morgue.”