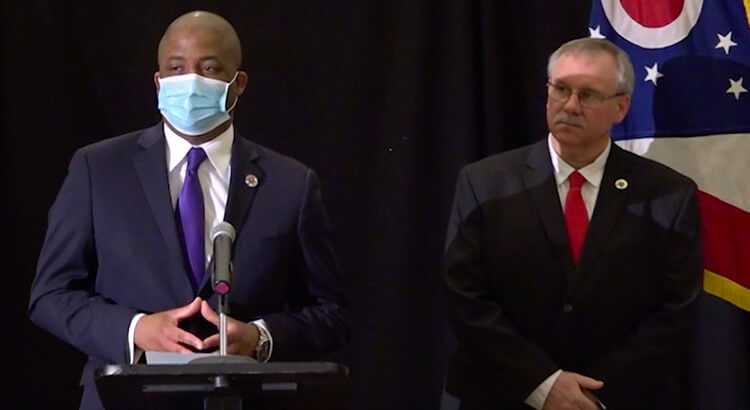 A bipartisan group of Ohio legislators have set their sights on the state’s school report card system, aiming to eliminate the letter grades they say are misleading and unfair.

State Rep. Don Jones, R-Freeport, and Rep. Phil Robinson, D-Solon, introduced a bill to get rid of elements of the state report card including the letter grade designation after studying the effects and usefulness of the grades over five years.

“Our report card has been used as a document that pits one school against another, or one district against another, based upon the overall letter grade,” Jones said in a Wednesday press conference on the new legislation.

A work group began looking at the school ranking system as part of the state operating budget bill in 2019.

Jones said that study came up with a list of potential recommendations but “really no resolution of where do we go from here.”

During discussions about the EdChoice private school voucher program, Robinson said everyone that testified brought up flaws in the state report card.

“The more we heard about, the more we listened to the testimony, it was clear that that’s one piece at the heart of systemic change that needs to happen in education policy in the state of Ohio,” Robinson said.

The new report cards will also include more detail about each school, so those looking for the achievements and flaws of a school will have to read the entire report, Jones said.

After bringing together another group of school superintendents and legislatures in January of 2020, Jones said simple goals for the ranking system were formed, leading to the current bill.

One of the superintendents involved in that work was Cameron Ryba, of Strongsville City Schools, who called the current report card “truly an arbitrary system.”

Another member of the work group was Marlon Styles, superintendent of Middletown City Schools. Styles is also a part of the work group focusing on the comprehensive education overhaul currently proposed as House Bill 1, to change the funding formula, something informed by the report card ranking system.

Styles said the report card legislation shifts the state away from punitive measures and a system “that has practices that are biased.”

“Ohio has an obligation to build strong children,” Styles said.

The bill currently has 58 cosponsors, according to Jones and Robinson, which are from both sides of the aisle.

It will be sent to the House Committee on Primary and Secondary Education for review.