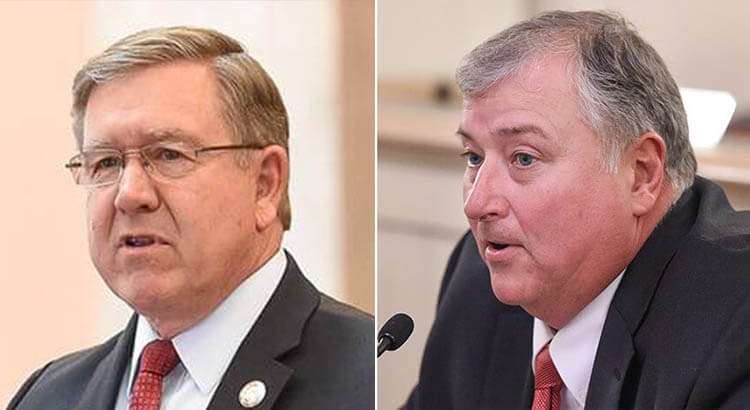 It has been 240 days since former House Speaker Larry Householder was arrested for his alleged involvement in a bribery and money-laundering scheme.

Yet the Perry County Republican remains in office as a state representative. And it does not appear his status as an active legislator will change any time soon.

Republicans in the Ohio House of Representatives met privately on Tuesday evening to discuss a possible vote to expel Householder from the state legislature while his trial remains pending. Householder has pleaded not guilty.

A lawmaker can be expelled from the chamber with a two-thirds vote.

“I have no news to report, no update,” Cupp told reporters after Wednesday’s floor session. “And I of course have a longstanding policy of not talking about internal caucus communications.”

Cupp was asked if he found it embarrassing for the state of Ohio that a lawmaker on trial for corruption is still serving in the legislature. He didn’t answer, pivoting to say the best thing would be for Householder to resign.

However, Householder has reiterated that he does not plan to resign. Does that make Cupp want to therefore hold a vote to expel?

Householder was unanimously removed as speaker a week after his arrest last July. A subsequent motion was made to expel Householder then, but Republicans tabled this motion.

Cupp defended that choice throughout 2020, noting that Householder was up for reelection in November and pointing out that state law allows a lawmaker to be removed once, but not twice. Cupp’s point was that Householder could have returned at the start of the new term in January 2021 following his successful reelection.

At numerous points, Cupp suggested that an expulsion vote would therefore need to wait until 2021. Just days into the new term, the Ohio Capital Journal reported, Cupp’s office privately requested a resolution be drafted to expel a member.

After more than two months into the new term, there does not appear to be any upcoming plans to introduce that resolution on the House floor.

Local officials within Householder’s district are urging the legislature to take action. More than a dozen elected officials from Coshocton County called for Householder’s removal in February, Cleveland.com reported. More recently, elected officials in Licking County made a similar request to Cupp that Householder be removed from office, The Associated Press reported this week.

Several House Republicans have been vocal in supporting Householder’s expulsion. Among them are Rep. Mark Fraizer, R-Newark, who also represents part of Licking County, and Rep. Brian Stewart, R-Ashville.

Proud of my friend Rep. @markfraizer for also standing tall here. Enough is enough. It’s time. Let’s do the right thing and then move forward together as a GOP caucus doing great work for Ohio. https://t.co/9O4odIhwyR