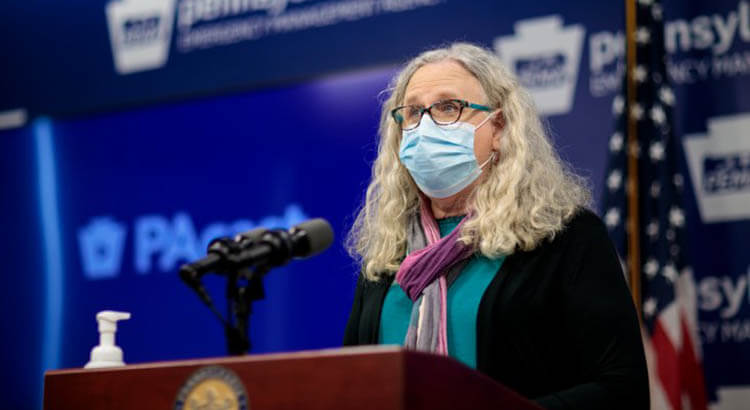 The Senate voted 52-48 to confirm her as an assistant secretary at the Department of Health and Human Services. Two Republicans, Sens. Susan Collins of Maine and Lisa Murkowski of Alaska, joined Democrats in supporting her nomination.

Democrats and LBGTQ advocates heralded Levine’s appointment as an important milestone, praising her qualifications as well as the significance to the transgender community of having her tapped for the post.

“As transgender Americans suffer high rates of abuse, homelessness and depression more than any other group, it is important to have national figures like Dr. Levine, who by virtue of being in the public spotlight will help break down barriers of ignorance and fear,” Senate Majority Leader Chuck Schumer, a New York Democrat, said ahead of Wednesday’s vote.

In her previous roles as a Pennsylvania state official who became very visible during the pandemic response as well as during her confirmation, Levine has been subjected to transphobic attacks, including from a Pittsburgh radio host who repeatedly referred to Levine as “sir.”

During her confirmation hearing last month, Levine faced a tirade from Sen. Rand Paul, (R-Ky.), about gender-affirmation surgery for minors. He grew increasingly angry as he pressed Levine to agree that minors should not be allowed to make decisions on hormone therapy or gender-reassignment surgery.

Several Democratic senators as well as LGBTQ advocates rebuked Paul over his aggressive questioning of Levine during that hearing.

“With the confirmation of Dr. Rachel Levine, we are one step closer to a government that mirrors the beautiful diversity of its people,” Human Rights Campaign President Alphonso David said in a statement after Wednesday’s vote, adding that her “her professional background and personal strength perfectly meets this moment.”

Levine, 63, is a pediatrician who most recently served as Pennsylvania’s secretary of health. She was appointed to that post in 2017, and before that, served as physician general of the commonwealth.

As Pennsylvania’s top health official when the pandemic began last year, Levine held daily public briefings in which she detailed the data on COVID-19 infections and deaths.

Republicans in Pennsylvania have blamed Levine for the state’s high number of COVID-19 deaths at nursing homes and long-term care facilities. Deaths at those facilities account for more than half of the nearly 25,000 Pennsylvania deaths from the virus.

GOP lawmakers, including Sen. Pat Toomey of Pennsylvania, who voted against Levine’s nomination, also criticized her for the state’s approach to restricting businesses and social gatherings during the pandemic, accusing the Democratic administration of being too slow in lifting restrictions.

“While I appreciate Dr. Levine’s service and responsiveness to my office over the past year, she has not earned a promotion to help lead the U.S. Department of Health and Human Services and I cannot support her confirmation,” Toomey said in a statement Wednesday.

Pennsylvania’s other senator, Democrat Bob Casey, has praised Levine’s background and her track record, describing her as “exactly the kind of crisis-tested leader our nation needs at [Health and Human Services] during this difficult time.”

During her tenure, Levine also was part of an effort by Gov. Tom Wolf’s administration to combat rising opioid overdoses. She signed a standing order that makes the overdose-reversal drug naloxone available at most pharmacies without a prescription.

A graduate of Harvard College and the Tulane University School of Medicine, Levine completed her training in pediatrics and adolescent medicine at the Mt. Sinai Medical Center in New York City.