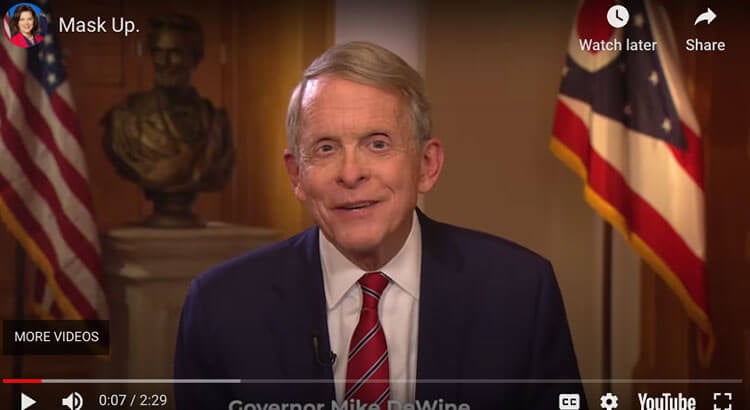 Gov. Mike DeWine did not hold his punches when commenting on a bill passed by the legislature targeting the executive branch’s authority to respond to a pandemic.

On Thursday, he called Senate Bill 22 clearly unconstitutional, predicted it would be challenged in court and suggested lawmakers did not fully understand the ramifications it would have when they voted to approve the bill.

Nevertheless, DeWine said his office would continue trying to reason with Statehouse Republicans in the days ahead. A veto is forthcoming and the governor hopes to convince enough members of his party to rethink the bill as legislative plans are made to override his veto.

Republicans have tried for nearly a year to undermine the authority of the governor’s office and state health department to respond to a pandemic, believing the executive branch has wielded too much power during this public health crisis.

Senate Bill 22 was introduced in January, a few weeks into the new legislative term. Its main provision calls for allowing lawmakers to strike down health orders and a state of emergency declaration via concurrent resolution.

The bill moved quickly, with the Ohio Senate passing it in mid-February and a House committee holding hearings earlier this month.

DeWine said his office had recent discussions with legislators but was not able to come to any resolution or compromise.

The House version underwent several changes Tuesday night. Lawmakers would no longer have to wait 11 days after a health order was introduced in order to vote it down — the amended bill said they could do so immediately after it was signed. Another change lengthened the time officials could reissue the same (or similar) order from 30 days to 60 days.

“The bill got worse,” DeWine opined.

The full House chamber voted to approve the bill on Wednesday, with the Senate agreeing to these changes the same afternoon. This sent the bill to DeWine’s desk.

The governor pledged nearly a month ago to veto Senate Bill 22 should it pass. In extended remarks on Thursday, he doubled down on that promise and outlined a number of objections with the bill.

DeWine said the bill is unconstitutional and “clearly violates the separation of powers.”

Researchers with the Legislative Service Commission, a nonpartisan group providing policy analysis to state legislators, previously wrote that the bill may be unconstitutional. LSC cited the bill seeking to rescind orders via concurrent resolution rather than through passing a law could open itself up to legal challenges.

“I’m very concerned about a future governor and health departments around the state not having the tools they need to keep the people of the state safe,” DeWine said.

“We just don’t know what the future will bring,” he added.

One provision of the bill is to end the state’s emergency declaration 30 days after the bill takes effect. (Lacking an emergency clause, the bill does not go into effect until 90 days after it becomes law; this would place ending the state of emergency some time this summer.)

DeWine said he did not know if this provision would make an impact this summer. He described hopes that state’s health orders and emergency declaration would already be over by then.

“My responsibility is to think about future crises and to think of what today might be unimaginable but tomorrow might be reality,” he said. “We have seen the unimaginable in this pandemic become real.”

Another of the late changes made to SB 22 prohibits local health departments from issuing quarantine orders to someone unless they have been diagnosed with an infectious disease or if they have come in direct contact with someone who has.

The governor said this could have disastrous consequences in future situations involving a disease such as Ebola.

He pointed to an example from early on in this pandemic, when two students at Miami University returned to Butler County from Wuhan, China, an original epicenter of the coronavirus. It was important that they quarantined upon arriving to Ohio, DeWine said, noting that SB 22 could bring a scenario where the two students would not be forced to do so.

“The only thing I can think is that members of the General Assembly just did not take this all the way through to the ramifications it would mean for the safety of their fellow citizens in the future,” the governor said.

The passage of SB 22 is not nearly the only example of that. Many Republican lawmakers have refused to wear masks throughout the duration of the pandemic, with some continuing to question the effectiveness of facial coverings on preventing the spread of COVID-19. A number of GOP lawmakers maintain connections with anti-vaccine groups actively working to discredit COVID-19 vaccines.

DeWine said he wants to continue having conversations with lawmakers about SB 22 and who are concerned about executive branch overreach.

“We want to work with the General Assembly,” he said Thursday. “We want to include them. We want to have conversations. We’re coming out of this thing. Things are going well. But I just can’t let this go … it really is about the future of protecting the people of the state of Ohio.”

House Republicans had a handful of members absent from the vote. Speaker Bob Cupp, R-Lima, told reporters he is “absolutely positive” the chamber has enough votes to override a veto. Senate President Matt Huffman, R-Lima, also said Wednesday he would schedule a vote to override as soon as the governor’s decision is made official.

“When the unknown becomes the known, when the hypothetical becomes real, local health departments and the governor have to have the ability to move very quickly to save lives,” DeWine said. “This is not about me. This is about the future and the saving of lives. And it would be absolutely irresponsible, absolutely irresponsible for me to do anything but veto this bill.”