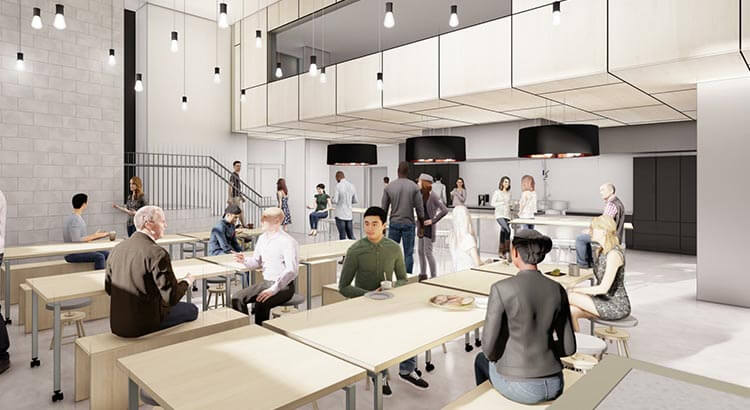 Tiffin, Ohio — The Seneca County Board of Commissioners heard an update on a $2.4 million community kitchen project during its board meeting Thursday morning.

Reverend Aaron Gerlach, of Old Trinity Episcopal Church, expressed “deep gratitude” to the commissioners for their efforts in facilitating the project.

The board assisted the church and Seneca County Common Ground, the two organizations that are working on the kitchen, by selling a piece of land in downtown Tiffin to be used for the upgrades to the facility at 125 E. Market St.

By expanding the building and creating the kitchen space, officials are aiming to connect local growers and businesses to the community.

Audrey Flood, of Seneca County Common Ground, said the project will provide opportunities for groups to cook and eat together, house a diverse set of cooking classes and create ways to give back to the community by preparing food.

Gerlach said the project is currently in the stage featuring more detailed planning, sharing information with the community and working to raise money.

“We envision this being a resource for the whole county,” he said.

Flood agreed, adding that the project would have many direct and indirect benefits to the community. She mentioned workforce development as an area that could see improvement via culinary training, cooking classes and other educational opportunities.

“The kitchen could also be used for canning, preserving or cooking items that people can’t do out of their home,” Flood said.

She also said the kitchen will be a great community development asset, helping Seneca County stand out. “It will be beneficial for grant opportunities and attracting new people, making this a place that people want to live, work and play,” Flood said.

Flood said the goal is to break ground on the expansion project in Spring 2022. She also shared a video during the meeting and a website link for those who want to get involved or learn more.

In other business, Jill Gosche, of Seneca County Sobriety, Treatment and Reducing Trauma (START), updated the commissioners on a new program to formally link first-responders to schools to avoid re traumatizing children after a traumatic event. The program, entitled Handle with Care, was launched in Tiffin City Schools last week.

Gosche said the program supports family stability in Seneca County and includes collaboration and partnership between the many safety service agencies and schools across the county. She said the program will be launched in Fostoria City Schools, at Sentinel Vocational Center and Seneca East, among other locations shortly.

“TCS makes Seneca County the 7th out of 88 counties in Ohio, and the first in the northern half of Ohio to have the program operating,” she said.

Gosche said the key to the program is establishing the link between first responders and children experiencing trauma, to make them aware of the situation and let their teachers know to handle the student with care because they are having a hard time.

The county’s allocation through the program is $158,000, and the CDBG Program also offers other competitive grants that political subdivisions may apply for. The board held a public hearing Thursday and Watkins said people can submit project ideas online at SeeSenecaGrow.org.

A community Development Implementation Strategy meeting is to be hosted via Zoom on April 6th at 1 p.m. to solicit more local feedback on potential projects to be funded via the CDBG allocation. Most grant applications through the program are due June 14, for further details, please contact the regional planning commission office.

In other action, Seneca County Sheriff Fred Stevens requested about $300,000 for several proposed projects, including upgrades to the sheriff’s office fleet of vehicles. Stevens said nearly 70 percent of sheriff’s office vehicles have over 195,000 miles.

“It’s not safe,” he said, adding that instead of the two vehicles the office was allocated within this year’s budget, he’d like to purchase four. Stevens also said he was working with the Village of Attica to exchange law enforcement services for some older vehicles that the village was no longer using. The commissioners received Stevens’ request in writing and agreed to consider it for next week’s session.

During appointments, the board received one bid for a 64-passenger bus on behalf of the Seneca County Opportunity Center. The bid, from Rush Trucking Centers of Lima, was for $105,281 if you include customization options and the trade-in of an older vehicle. Opportunity Center Superintendent Lew Hurst is to review the bid before a purchase is made.