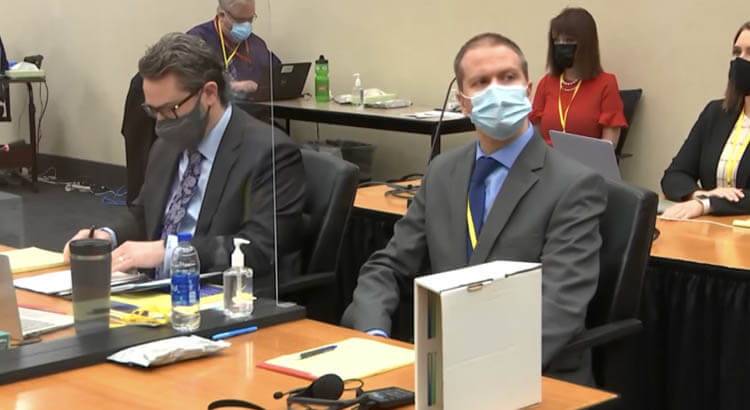 Attorneys in the murder trial of former Minneapolis police officer Derek Chauvin laid out their case on Monday before 14 jurors who will decide if Chauvin is guilty of murder or manslaughter in the death of George Floyd on May 25.

The opening statements from the prosecution and defense indicate the trial will hinge on the cause of death and police training.

Jerry Blackwell, a private attorney working pro bono with the attorney general’s office, began his opening statements for the prosecution by citing an oath taken by Minneapolis police officers: “I will enforce the law courteously and appropriately … never employing unnecessary force or violence.”

He showed the video of Chauvin with his knee pressed to Floyd’s neck for about 9 minutes. It was the first time that some members of the jury had seen the video, which went viral and set off demonstrations across the world calling for racial justice and an end to police brutality against Black people.

Blackwell said the case centers on the 9 minutes and 29 seconds that Chauvin held his knee to Floyd’s neck, which he says clearly shows that Chauvin used excessive and unreasonable force.

Blackwell previewed some of the witnesses the prosecution plans to call to testify, including Minneapolis Police Chief Medaria Arradondo, who he says will tell jurors that Chauvin’s actions did not reflect the training or policy of the Minneapolis Police Department.

“The evidence is going to show you there was no cause in the first place to use lethal force against the man who was defenseless, who was handcuffed, who was not resisting,” Blackwell said. “This case is not about split-second decision making. In 9 minutes and 29 seconds there are 479 seconds — not a split second among them.” (There are 569 seconds in 9 minutes and 29 seconds.)

The video taken by a bystander showed Chauvin kneeling on Floyd’s neck for 8 minutes and 46 seconds, with that length of time becoming a fixture in demonstrations. During a news conference on Monday morning, Rev. Al Sharpton asked the public to kneel for 8 minutes and 46 seconds beginning at 8:46 a.m. to show how long Chauvin kept his knee on Floyd.

Once body camera footage from the four officers involved in Floyd’s death was released, however, it showed Chauvin’s use of force lasted even longer: 9 minutes and 29 seconds.

Blackwell also laid out the prosecution’s plan to show it was Chauvin’s use of force that caused Floyd’s death. He told jurors they would show  Floyd experience an “anoxic seizure” and “agonal breathing” as a result of oxygen deprivation.

During the video, Floyd says “I can’t breathe” 27 times, with that phrase becoming a chant at demonstrations across the country.

The medical examiner ruled Floyd’s death was heart failure as a result of being subdued by law enforcement. Floyd’s death was ruled a homicide, but the autopsy also noted several other factors, including the presence of the opioid fentanyl and underlying medical conditions including coronary disease, an enlarged heart and swelling of the lungs.

An independent examiner hired by the Floyd family ruled the cause of death was “asphyxiation” — or suffocation — as a result of Chauvin’s knee to his neck.

Defense attorney Eric Nelson focused heavily in his opening statement on the fentanyl and methamphetamine found in Floyd’s system and raised questions about the claim that Chauvin’s use of force caused asphyxiation or heart failure.

“Common sense tells you there are always two sides to every story,” Nelson said.

Nelson said the man and woman accompanying Floyd on the day of his death will say he took two Percocet pills and fell asleep in the car. The woman with Floyd, Shawanda Hill, will say that she couldn’t wake Floyd up and called a friend to pick her up before police arrived.

Nelson also said Floyd resisted arrest and was such a large man that it took three officers to subdue him.

The focus on Floyd’s drug consumption suggests the defense plans to argue that the intoxicants contributed to Floyd’s death, and that Chauvin could not have anticipated that Floyd was under such duress and is not at fault. Floyd family attorney Ben Crump warned the public during a Monday morning news conference that the defense would try to diminish Floyd’s character by focusing on drug use.

“The facts are simple. What killed George Floyd was an overdose of excessive force,” Crump said.

Like the prosecution, Nelson said he also plans to call expert witnesses on the use of force, but he said his experts will prove that Chauvin acted in accordance with his training.

“You will learn that Derek Chauvin did exactly what he had been trained to do over the course of his 19-year career,” Nelson said. “The use of force is not attractive, but it is a necessary component of policing.”

Chauvin is charged with second- and third-degree murder and second-degree manslaughter.

The trial is expected to last up to four weeks. The other three officers involved are scheduled to stand trial in August.