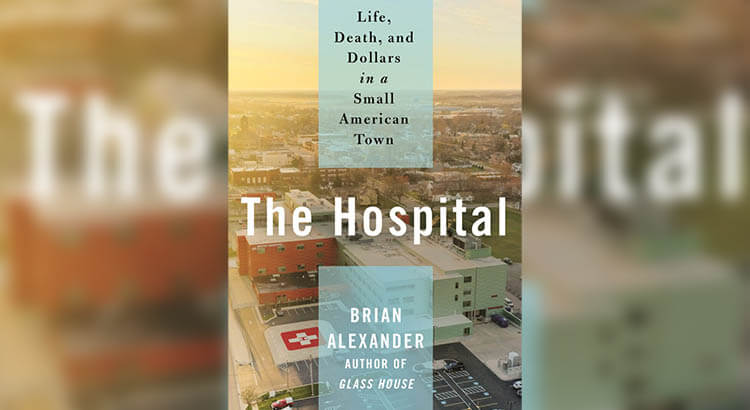 Keith Swihart couldn’t afford his insulin, so he started rationing it out or skipping doses.

It wasn’t laziness — Swihart had been working since he was 13. Even with health insurance from employers, he couldn’t afford his cost-share of the hormone he needed.

His unmitigated diabetes went into a tailspin, costing him his sight in one eye, part of his foot, and his gallbladder. This all built a mountain of debt Swihart would likely never pay off.

The irony of it all, captured in a new book by Ohio native Brian Alexander: If Swihart’s insulin had been free to him, he would still be working and paying taxes.

Instead, it took years of spiraling health, visits to six hospitals, medical debt, and disability until Swihart had government funded insurance to cover the staggering cost of his medical care.

“America’s health problem is linked up to its massive inequality problem — its massive abuse, in my opinion, of a lot of working-class Americans and poor people,” Alexander said in an interview.

The book, “The Hospital: Life, Death, and Dollars in a Small American Town,” follows how a small hospital in Bryan, Ohio — population 8,230 — fights for its economic survival and independence from large hospital networks.

To report it all, Alexander won deep access to the hospital’s books, its strategic planning sessions for its precarious financial future, and its navigating of a claim of sexual harassment in the #MeToo era.

Markets are cruel to independent players like Bryan’s Community Hospital and Wellness Center, the book details. CHWC pays between $7,000 and $8,000 for an artificial knee, whereas a network with buying power like ProMedica would pay $4,200, without the pressure to pass the savings on to patients.

In corner after corner of the complex market, companies win, and patients lose. The insulin Swihart couldn’t afford cost about $35 per vial 20 years ago and $300 today. Drug companies who make it have paid millions in penalties after being accused of price fixing.

This is all for a drug whose inventors sold its rights for $1 with the goal of bettering humanity.

Throughout the book, Ohioans working low wage jobs struggle to pay for the most basic of health care needs.

Valerie Moreno, who works three jobs, said she and her family almost never see the doctor. Despite bronchitis, an ear infection, and a sinus infection, she said couldn’t miss work because she didn’t have paid sick leave.

As the book opens, Marc Tingle’s heart descends near death and into ventricular fibrillation. Even in this high-octane emergency room moment, Alexander notes, every syringe, tube, and unsealed drug bottle would be scanned, charged, and sent to the labyrinth of reimbursements and billing that is American health care.

“Many Americans, whether they are conscious of it or not, are really walking on a balance beam,” he said. “They may not realize that … but one bad diagnosis can knock them off the balance beam and create financial as well as physical havoc.”

The road to an America where full-time workers can’t afford health care, as the book covers, is paved with political failings.

State Rep. Craig Riedel, R-Defiance, makes a brief appearance in the book, declaring at an “opioid summit” event that government won’t solve the overdose problem, and “we will be relying heavily on our religious community and Christ to get this thing solved.”

Williams County Health Commissioner Jim Watkins put his forehead to the table in front of him as the line drew applause.

Ohio currently has the 5th highest overdose death rate in the U.S.

That a government is controlled by people who subscribe to beliefs that governments only create problems, not solve them, is larger than just Riedel, Alexander said.

In Bryan, like many rural American towns, the factories are gone and the hospital is the economic engine. And in one of the most conservative pockets of the state, two-thirds of the county’s largest employer’s revenue comes from the federal government via Medicare and Medicaid.

The book ends as the pandemic — itself an existential threat to rural hospitals — begins.

Beyond the new issues COVID-19 introduced, Alexander said it illuminated the ones that are already here: lapses in rural health care, disparate health outcomes on socioeconomic and racial lines, a patchwork system with gaping cracks to fall through, and more all came to light as the coronavirus spread.

“I think what the pandemic did, we have these fault lines, and we like to paper over the fault lines and pretend they’re really not as bad as they are,” he said. “The pandemic just blew them all wide open.”