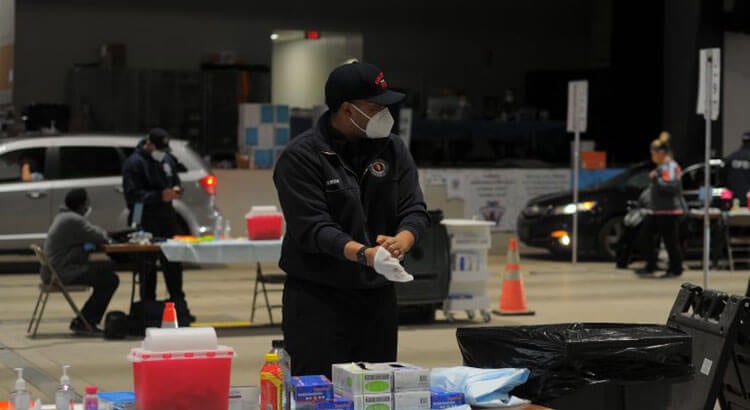 Of more than 1.8 million Ohioans who have received at least one COVID-19 vaccination dose, only 5.6% went to Black Ohioans, who comprise about 13% of the population.

The inequity is the latest example of disparate health outcomes in the state and nation along racial lines.

The math is slightly worse among the nearly 1 million Ohioans who are fully vaccinated, mostly by two-dose vaccines: Just 5% of them are Black.

Part of the explanation for the gap: Black people comprise 14.3% of the general population in the U.S., according to 2019 census estimates. However, they comprise just 9.7% of the 65-and-up population, which most states have prioritized for the vaccines.

In other words, one manifestation of unequal health outcomes is masking another. White Americans live longer lives than Black Americans by more than three years, on average, according to CDC data.

Ohio’s queue — with exceptions for first responders, educators, and the ill — prioritizes the elderly, of whom there are fewer in Ohio who are Black.

“It does speak to something bigger than the vaccine and the deployment of one element, but the unfortunate nature of the health care system,” said Rebecca Weintraub, a professor at Harvard Medical School and a faculty member at Ariadne Labs.

She said states set prioritization policies with efficiency in mind, though that efficiency may come at the expense of equity.

“In many ways, it’s these allocation principles that led and propagated this access,” she said.

The problem could be much worse or better than the data suggests — 7% of vaccines went to recipients of “unknown” race. Vaccine providers don’t require recipients to fill out all fields and do not offer an option for those who specifically wish to withhold their race or ethnicity, further clouding the picture.

Requiring or somehow incentivizing better data collection would be a good first step, several health experts and officials interviewed for this report said.

They noted the vaccine disparity is new, but unequal outcomes in health based on racial or socioeconomic lines is not. Some of the problems with vaccine distribution are merely extensions of preexisting inequities.

For instance, 21.6% of Black households in Ohio do not have access to a vehicle, compared to 6.1% of white Ohioans, according to the National Equity Atlas. Yet most large vaccination sites are drive-through style.

“It is likely a conglomeration of a number of different factors,” said Reem Aly, a vice president at the Health Policy Institute of Ohio.

“It is going to be inequities we see in access to care, historically, we know that there is racism within the health care system and there is an understandable mistrust in Black communities of health care providers. That is certainly contributing to the issue.”

Earlier this week, Ohio Gov. Mike DeWine said he would nor prioritize prisoners for the vaccine, even as Ohio prisons hosted some of the heaviest outbreaks in the nation. About 45% of Ohio’s inmates are Black, according to state data.

The department imposed a “vaccine equity priority plan” in late February, setting aside 20% of all doses for vulnerable populations. A CPH spokeswoman said in an email that so far in Columbus, only 4% of doses have gone to Black residents. However, they suspect Black Columbus residents comprise some of the 18% of recipients listed as “unknown” race. As evidence, she mentioned a clinic last week in which 65% of attendees were Black.

Ohio isn’t the only state leaving Black residents behind in the vaccination queue. Kaiser Family Foundation data shows most U.S. states are exhibiting a similar pattern.

For now, demand for any of the three COVID-19 vaccines authorized for use far outpaces demand. However, as supply ramps up and governments streamline rollouts, “vaccine hesitancy” is likely to come into sharper focus.

February polling from the Kaiser Family Foundation of about 1,900 Americans found that about 15% “definitely” won’t get a vaccine, 7% will only get it “if required,” and 22% want to “wait and see.” Gallup polling from the same time period found about 71% of Americans would accept the vaccine.

Dan Tierney, a spokesman for DeWine, said Ohio is seeking to ensure equitable access to and information about vaccines, but there are no plans to single out any racial or ethnic group. One strategy he mentioned is using the CDC’s “social vulnerability index,” a compilation of different socioeconomic indicators, to target doses toward underserved communities.

Other tactics include “encouraging” providers to offer weekend and evening appointments, being flexible with identity verification documents, hosting pop-up clinics in minority communities, and providing transportation options for people lacking access to a vehicle.

If help is coming, it’s unlikely to arise from state lawmakers, who have spent nearly a year seeking to limit the Ohio Department of Health’s power. Ohio Senate President Matt Huffman, R-Lima, did not respond to questions sent to a spokesman.

“I think it’s a situation that we’re all aware of that the opportunity to take vaccinations is maybe less in the minority communities,” he said. “It’s concerning. But that is something that the administration is trying to address.”

House Minority Leader Emilia Sykes, D-Akron, unloaded on DeWine’s handling of the rollout in an interview. She criticized his “excuses” in not requiring race data from providers. She suggested Ohio should step away from an age-focused approach to prioritizing vaccines.

“He should consider hardest hit communities,” she said. “We should focus the resources where the need is the highest. This is what epidemiology does.”

Much of her criticism extended beyond the rollout and into an alleged anti-public health attitude from the Ohio Republican Party. However, she put the brunt of the blame at DeWine, the helm of the state party.

“It’s frustrating, it’s hurtful, it’s maddening quite frankly,” she said. “Why is it that Black communities should suffer because the governor decided our lives aren’t that important?”