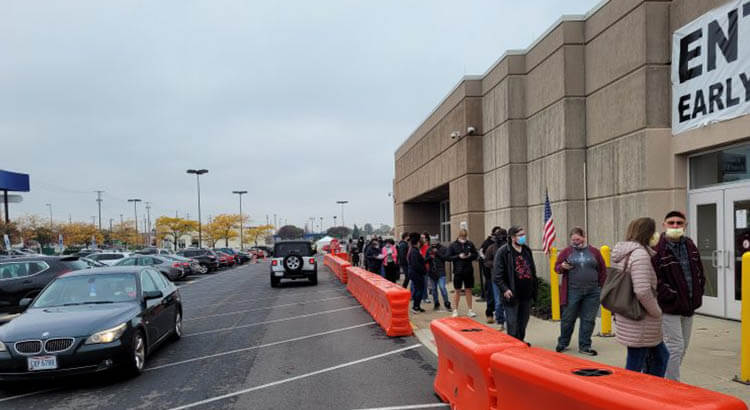 Despite all the horrors of the coronavirus pandemic, it delivered one wrinkle that some advocates believe is an unprecedented opportunity to mitigate “partisan gerrymandering.”

Ever wonder why Congress or the state legislature not only refuse to do things that have support of 70% of the public, they often turn around and do the exact opposite?

Gerrymandering is a big part of the reason. The party in power draws legislative districts to maximize party advantage, giving outsized clout to the most passionate members of that party’s base.

Advocates say there’s a special chance to break out of the old pattern this year because the pandemic delayed until Sept. 30 census data that otherwise would already be available. The delay is giving community groups months to get involved in a process that state legislatures typically present to the public almost as a fait accompli.

“That gives us an incredible opportunity to use this spring and summer to really talk to people about what they want to see and put down benchmark maps across the whole country and show what community-centered redistricting can look like,” Tufts University mathematician Moon Duchin said earlier this month during a conference call hosted by the watchdog group Common Cause.

State-legislative and congressional districts are typically redrawn every 10 years when new census data become available. The purpose of the process is to reapportion representation to reflect changes in the population of states in the case of the U.S. House of Representatives or, in the case of state legislatures, changes within regions of states.

The process has been performed with an eye toward partisan advantage at least since 1812, when Federalist opponents coined the term “gerrymander” to mock a salamander-shaped district drawn under the leadership of Massachusetts Gov. Elbridge Gerry.

With the advent of computer technology, the art of the gerrymander has become vastly more surgical. And it’s led to some highly unrepresentative outcomes.

For example, the last time congressional districts were redrawn in Ohio was 2011, when Republican legislators controlled the process. The result favored Republicans wildly more than the state’s partisan breakdown might indicate.

In the first congressional election using those maps, the resulting Ohio House delegation was 75% Republican and 25% Democratic. Meanwhile, Barack Obama, the Democratic presidential candidate, actually beat Republican Mitt Romney by a 51%-48% margin in the same election.

Some Ohio voters undoubtedly split their tickets in that election, but it’s implausible that nearly enough did to account for such a huge difference between the congressional and presidential elections.

“In 2021, the attack on voting rights and redistricting is going to be even more bare-knuckled and blatant,” she said. “The Supreme Court has stripped the Voting Rights Act of some of its most (important protections) and it’s also blocked efforts to rein in partisan gerrymandering.”

In Ohio the 2021 redistricting process will be the first under new rules. Ohio voters in 2018 overwhelmingly approved a system that would require bipartisan support for 10-year congressional and state legislative maps. If that fails, four-year districts could be drawn with a party-line vote.

The new system also requires that the districts be compact, contiguous and keep entire counties within their boundaries. Unlike the current lopsided breakdown, the elections that result from such maps are supposed to reflect the partisan makeup of the state as a whole — although in the case of Congress, that rule doesn’t go into effect until the second round of redistricting under the new system.

“We know there’s wiggle room in those rules,” said Mia Lewis, policy director for Common Cause Ohio. “We want to get as fair maps as possible.”

One way to do that is for community groups to start drafting them using the Districtr tool created by Duchin’s MGGG Redistricting Lab.

In fact, the lab is already partnering with Ohio State’s Kirwan Institute for the Study of Race and Ethnicity on a project to identify communities of interest and map them into congressional and state legislative districts.

The point is to have some clear notions about what you want to see in maps when those in charge of drawing them unveil their first drafts.

“It’s very difficult to get up in a meeting and speak in the abstract,” Lewis said. “What you want is a map.”

The Princeton Gerrymandering Project notes that this year’s delay in census data causes some big complications. That’s because it will make it impossible to meet deadlines set in the state constitutional amendment setting out the redistricting reforms.

Among the solutions the Princeton group proposes are seeking a court-mandated extension in drawing maps, delaying the 2022 primary, or drawing maps using data from the U.S. Census Bureau’s American Community Survey.

Few congressional districts in the United States are so competitive that it’s anybody’s guess who’s going to win them between one election and the next. But many are so uncompetitive that the winner is sealed in party primaries, which often become a race to the extremist fringe.

One example of that dynamic is Rep. Marjorie Taylor Greene, R-Ga., who has a record of expressing racist views, denying the reality of school shootings and whose speculations about California wildfires resulted in the mocking hashtag #JewishSpaceLasers. There’s also Rep. Jim Jordan, R-Ohio, who endorsed her.

Another, less visible ill caused by a lack of competition: lazy lawmakers who don’t mind being packed into an uncompetitive district even if that means being in the partisan minority. They get to enjoy the perks and prestige of office without the inconvenience of having to mount a hard reelection campaign every two years.

In February, Ohio Gov. Mike DeWine said he supported the concept of more competitive districts. But he said increasing political polarization along geographic lines would make it difficult to do that and adhere to the new system’s requirement for compactness at the same time.

“The counties that were Republican 10 years ago may be much more Republican today,” DeWine said. “In other words, the margins have gone way up and we’ve seen the same thing with Democrat counties.”

Duchin, the Tufts mathematician, said that’s not a new argument.

“This is actually a research focus for us in our lab,” she said. “Ever since the original gerrymanders, politicians… have been claiming that gerrymanders follow the political geography.”

She and her colleagues have examined whether district maps merely reflect political geography or are the result of blatant partisan gerrymandering by modelling alternatives using the same set of rules.

“That gives you a way to answer the question: Is this plan unusually uncompetitive, or is it a function of where people live?” she said. “In most of the cases that smell like egregious gerrymanders, it turns out to be borne out by the modelling.”

Feng, Common Cause’s redistricting director, said that when California reformed its process it didn’t specifically try to draw more competitive districts. Even so “a dozen (out of 53) districts got drawn that were more competitive,” she said.