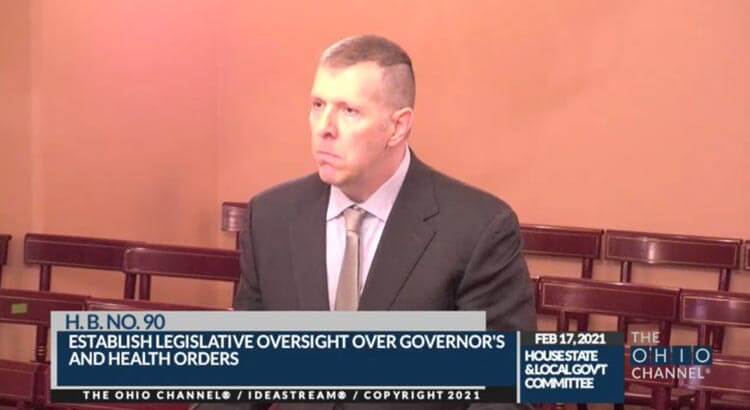 The opening testimony Wednesday in support of a legislative effort to allow lawmakers to vote down public health orders went far enough off the rails for YouTube to remove footage of the speaker.

Tom Renz, an attorney for Ohio Stands Up, filed a lawsuit in federal court in September seeking to overturn any and all health orders related to the COVID-19 pandemic. A federal judge last week deemed the arguments nearly “incomprehensible” and ordered Renz to show cause for why he shouldn’t dismiss the suit for procedural errors.

The video was soon taken down for violating YouTube’s terms of service.

“We have clear Community Guidelines that govern what videos may stay on YouTube, which we enforce consistently, regardless of speaker,” said Ivy Choi, a spokeswoman for Google, which owns YouTube.

“We removed this video in accordance with our COVID-19 misinformation policy, which prohibits content that claims a certain age group cannot transmit the virus. We do allow material with sufficient educational, documentary, scientific or artistic (EDSA) value.”

In his testimony, Renz baselessly claimed no Ohioans under the age of 19 have died of COVID-19. Data from the Ohio Department of Health shows 10 children in the age group have died of the disease during the pandemic.

Similarly, Renz said children can neither contract nor spread COVID-19. He even claimed the CDC says this as well, which is untrue. CDC guidance states children can contract and spread the coronavirus.

While it’s unclear which specific COVID-19 misinformation from Renz sparked YouTube’s decision, there’s a lot to choose from.

Renz’s testimony was a firehose of COVID-19 conspiracy theorizing: He said unspecified entities “provide funding for people to find a COVID-19 death;” the ODH “whitewashes” its coronavirus data; that PCR testing, which public health officials consider to be a premier diagnostic, is “garbage” or “absolutely useless.”

He claimed the lockdown orders of the spring to be “the most drastic curtailment of rights ever taken in American history.” The statement was made without acknowledgement to the enslavement of Black Americans, the mass detention of Japanese Americans to internment camps during World War II, the forced relocation of Native Americans, or any number of national atrocities through American history.

While YouTube removed the footage, Ohio Republican lawmakers praised Renz for the testimony.

Chairman Scott Wiggam, who has falsely proclaimed that Donald Trump won the 2020 presidential election, praised Renz for bringing “the other side of the data” to the table.

Rep. Diane Grendell, who without evidence accused ODH of publishing “corrupted” data to a panel of state senators in November, also praised Renz.

Footage of the hearing is still publicly available on the Ohio Channel, and OAMF has since re-uploaded it to Rumble, which has looser content guidelines.

Renz made the statement supporting House Bill 90, which would allow lawmakers to vote down public health orders related to the pandemic. A similar version of the proposal passed the Senate earlier this week.

The lawsuit against ODH was Renz first filing in federal court after passing the bar on his fifth attempt, according to records from the Ohio Supreme Court.

His “about me” page for his website claims lists no prior legal experience besides serving as a clerk on the Indian Supreme Court. However, in a prior interview, he said he did not remember when he served on the court and said he did not speak Hindi.

Renz declined to answer questions about his testimony.