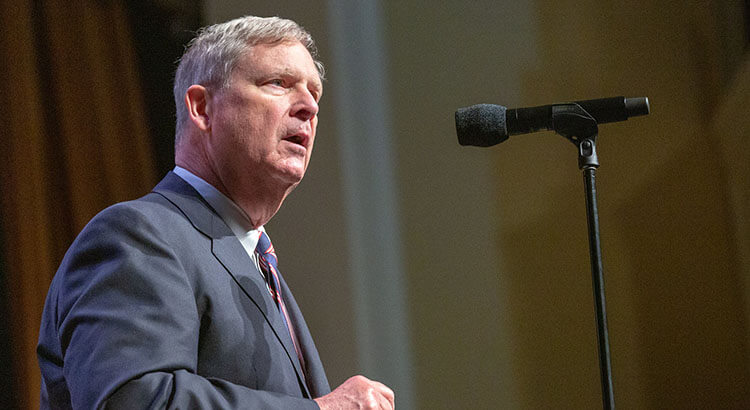 The U.S. Senate on Tuesday in a 92-7 vote confirmed former Iowa Gov. Tom Vilsack to run the U.S. Department of Agriculture for a second time.

Vilsack, 70, also headed the $151 billion agency under the Obama administration, for eight years.

But he has garnered criticism from Black and minority farmers for his treatment of them during his tenure. Civil rights leaders also criticized his mishandling of former USDA adviser Shirley Sherrod of Georgia, whom he wrongfully forced to resign.

Sen. Debbie Stabenow, chair of the Senate Agriculture Committee, spoke in favor of Vilsack on the floor prior to the vote.

“I know he’s very focused on tackling the climate crisis and has done a lot of work since leaving as secretary of Agriculture a few years ago to focus on voluntary, producer-led, farmer friendly efforts that can make a real difference and allow agriculture to lead in addressing the climate crisis,” the Michigan Democrat said

Sen. Charles Grassley, an Iowa Republican, introduced Vilsack at his confirmation hearing earlier this month, and  in a statement on the Senate floor defended Vilsack’s record on working with Black farmers and his work on civil rights within the agency.

Grassley said that a provision he pushed in the 2008 farm bill allowed more black farmers to bring their claims forward under a consent decree and authorized $100 million for additional settlements. Grassley said Vilsack discovered that wasn’t enough, so part of a USDA budget request included $1 billion for a more robust settlement and was later signed into law.

“He made it clear to all employees that discrimination of any form will not be tolerated at USDA,” Grassley said. “I am looking forward to working with Secretary Vilsack and other leaders in Congress to ensure equal rights for every farmer and family in this country.”

During Vilsack’s confirmation hearing, he discussed how he would lead the agency to meet climate change goals in farming, food insecurity, supply chain problems and address inequalities faced by Black farmers.

Vilsack at his hearing also pledged that he would “ensure all programming is equitable and work to root out generations of systemic racism that disproportionately affects” Black and Indigenous people and people of color.

“I will build the most diverse team in the Department’s history, one that looks like America, and will extend that commitment across all USDA agencies and offices,” Vilsack said.

Vilsack, also a former state legislator and mayor of Mount Pleasant, served as the CEO and president of the U.S. Dairy Export Council after leaving the Obama administration. HIs nomination has been backed by numerous large agricultural groups representing producers.

The White House on Monday also sent to the Senate the nomination of Jewel Hairston Bronaugh to be deputy secretary of Agriculture. Bronaugh is the commissioner of the Virginia Department of Agriculture and Consumer Services.