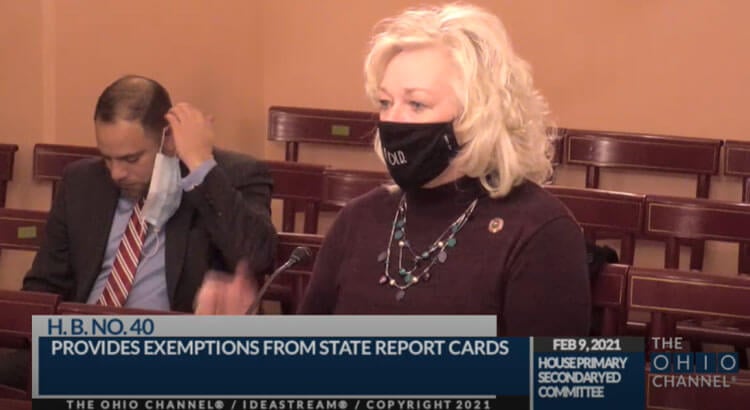 As state officials look for solutions to an education gap caused by the COVID-19 pandemic, two pieces of legislation introduced Tuesday hope to give more leniency on state and federal testing.

The bill would waive state testing for the 2021-2022 school year and direct the Ohio Department of Education to seek a waiver for federal testing, as well as holding school districts harmless on state report cards which determine funding levels and eligibility for EdChoice private school vouchers and academic distress commissions.

“We do need to see where our kids have been left behind, but I don’t need a test that’s going to tell us something after the kids have left,” Sobecki told the House Primary & Secondary Education Committee on Tuesday.

She said the waiver of testing “appears to have broad, bipartisan support” within the legislature.

Bipartisan support for state testing waivers came in the same Tuesday meeting, in the form of a separate bill brought by Republican state reps. Kyle Koehler, R-Springfield, and Adam Bird, R-New Richmond, who asked for many of the same things, including state and federal testing exemptions.

“I am not asking to waive test requirements because we don’t need to know how testing will go,” Koehler told the committee. “I think we know it’s not going to go well. Students are going to be behind.”

In further support of testing pressure relief, State Board of Education member Dr. Christina Collins released a proposed resolution directing the ODE limiting the use of state testing, and to “include a district designation of online, hybrid, or in-person on school building and district level report cards.”

In the resolution, Collins writes that COVID-19 “has affected every student in Ohio, disrupting the structure of teaching and learning and emphasizing children’s dependency upon adults for nurture, protection and providing for health and well-being.”

Along with the district designation, the board member asks that a disclaimer on state reports say that data “are for the purpose of understanding how learning was impacted as a result of extreme circumstances.”

Earlier in the day, ODE Superintendent Paolo DeMaria said the test scores coming out of a pandemic’s worth of learning styles emphasize the need for students to get back to in-person instruction.

DeMaria acknowledged a lower participation rate in the state testing, saying the ODE promoted a “safety first” mentality in taking the tests. But from the testing that did occur, the state saw an 8% increase in kindergarten-readiness scores considered “not on track.”

This third-grade test is set to occur this year starting from March 22 to April 23, part of why Sobecki said their legislation needs to be quickly moved through the statehouse and set up to be signed by the governor.

DeMaria, and the study itself, noted that the declining scores were even lower in minority and economically disadvantaged groups.

State reports also showed a decrease in enrollment of 3%, particularly in pre-school and kindergarten.

DeMaria spoke during Gov. Mike DeWine’s Tuesday press conference, in which he spent most of the time presenting the progress of vaccinating school teachers and personnel, something that the state started this month. While the state continues to vaccinate those 70 and older, they set aside some of the approximately 100,000 per week the state receives to give to school districts.

Also on Tuesday, DeWine added a new project for school districts across the state, asking them to come up with an individualized plan to help student catch up on last year’s losses.

“We need to be bold in our ideas, and we need to work with the Ohio General Assembly,” DeWine said, adding that a total of $2 billion in federal funding has been made available to schools to help with this problem.

DeWine left the decisions up to the individual districts, but offered examples such as longer school years, longer school days, summer classes, tutoring, or even remote options as ways to fill the education gap.

Districts have until April 1 to make their plans public and accessible to the General Assembly.