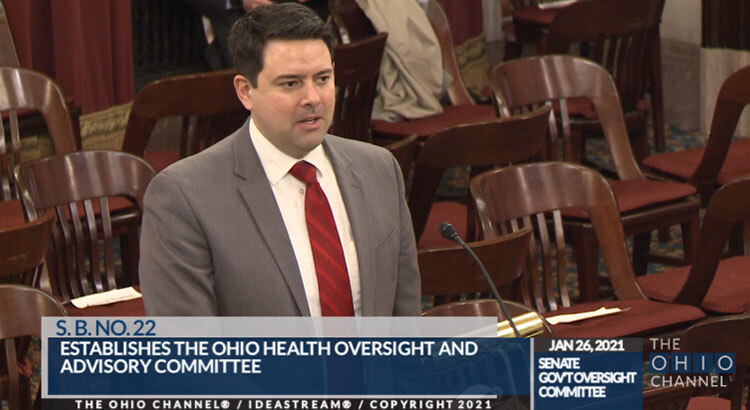 Some Ohio lawmakers believe the health orders issued over the past year are unconstitutional and reflect an executive branch of government overstepping its boundaries.

A proposed bill to solve that problem may itself be unconstitutional.

That’s the opinion of the Legislative Service Commission, a non-partisan group which provides legal and policy research to Ohio legislators.

Senate Bill 22 was introduced last month by state Sens. Rob McColley, R-Napoleon, and Terry Johnson, R-McDermott. The bill would give the Ohio General Assembly authority to rescind any public health order from the Ohio Department of Health by passing a concurrent resolution. Lawmakers could similarly strike down any executive order or emergency declaration issued by the governor.

SB 22 would also create an “Ohio Health Oversight and Advisory Committee” made up of 10 state lawmakers who could rescind health orders, executive orders and emergency declarations by a majority vote.

If an order is rescinded, executive branch officials would have to wait at least 90 days before attempting to issue it again.

Concurrent resolutions differ from bills in that resolutions do not head to the governor’s desk to either be signed into law or vetoed.

DeWine has pledged to veto any bill targeting the authority of ODH to respond to the pandemic. He has vetoed several such bills to date, the latest example coming in December.

Doing so may be unconstitutional, two research attorneys with LSC wrote in a bill analysis. Because legislators cannot enact any law “except by bill,” they wrote, an effort to instead rescind health and executive orders by concurrent resolution “might be vulnerable to a constitutional challenge.”

ODH has cited Ohio Revised Code section 3701.13 as explaining its authority to issue sweeping pandemic orders, such as the initial stay-at-home order. The relevant portion of 3701.13 reads: “The (health) department may make special or standing orders or rules … for preventing the spread of contagious or infectious diseases.”

The Ohio General Assembly has the power to completely rewrite this section of code and thus establish a new framework for how the government can respond to a pandemic, Berman noted.

In other words, lawmakers who take issue with the department’s authority could simply pass a bill stripping away that authority. A dozen House Republicans proposed doing so last May.

As written, SB 22 leaves the existing framework mostly in place — ODH would still be able to issue health orders to prevent the spread of disease. Lawmakers would then be able to rescind health orders as they see fit.

During sponsor testimony, McColley and Johnson said their bill is not meant to target DeWine or ODH but instead address a broader issue of the separation of powers.

“Granting statutory authority to the General Assembly to act on behalf of the citizenry of the state to protect their rights and liberties is a sensible safeguard against state overreach,” their testimony reads. “It is important that we, the legislative branch, are engaged when it comes to making decisions that so powerfully affect the health safety, welfare and freedom of our constituents.”

The legislative branch enacts laws and the executive branch carries them out. It’s unclear if the Ohio legislature can both provide the executive branch authority to issue orders and determine which resulting orders are valid — the latter step taken by concurrent resolution instead of passing a new bill.

Ohio courts have not directly addressed this issue, according to the LSC analysis, but there is a precedent at the federal level. The LSC quotes a U.S. Supreme Court ruling that reads, “once Congress makes its choice in enacting legislation, its participation ends. Congress can thereafter control the execution of its enactment only indirectly — by passing new legislation.”

Critics of DeWine and ODH gave their support for SB 22 during its first hearing last week before the Senate Government Oversight and Reform Committee. The next hearing is slated for Wednesday morning, with lawmakers scheduled to hear testimony from bill opponents and neutral interested parties.