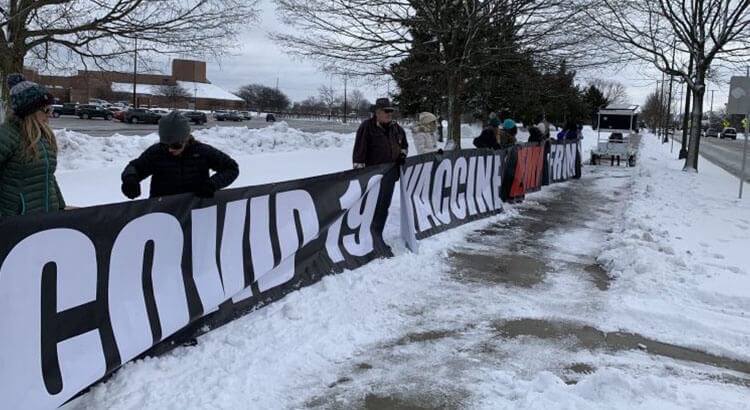 Ohio teachers began their march toward immunity Tuesday, despite a small crowd of anti-vaccine activists who protested outside the first COVID-19 vaccine clinic for Ohio educators.

Even before the first appointments at noon, teachers lined up outside Hilliard Davidson High School for appointments to receive a vaccine against the new coronavirus.

Gov. Mike DeWine opted to prioritize immunizing teachers, along with the ill and the elderly, as a means to speed up the reopening of schools.

On the sidewalk just off campus, meanwhile, about 15 anti-vaccine activists stood in the February cold to hold a large sign and distribute a flier of anti-vaccine propaganda, stoking baseless fears of vaccine injury.

The key step toward immunity Tuesday (which still requires a few weeks’ time and booster shot) came as relief for teachers, many of whom have led in-person classes despite a pandemic that has infected more than 900,000 Ohioans and killed more than 11,000 of them since March.

“I feel like we made history,” said Jessica Kocak, a high school algebra teacher from Upper Arlington.

“I feel very grateful that we were given this opportunity to be among the first to be vaccinated. My age bracket would not have been. It feels very special they would allow educators to be in the front of the vaccination line.”

A Kroger Health spokeswoman said between Hilliard and another site in Reynoldsburg, over 3,200 vaccines were administered Tuesday to Franklin County teachers and staff.

After emerging from the clinic, Michael Schaefer, a health and physical education teacher, said he worried less about himself catching COVID-19 during the pandemic than passing it on to his ailing, 78-year-old mother, who lived with him during a few months of 2020.

He and his wife, Kirsten, said they’re grateful to obtain a shot.

“I try not to make it bigger than it needs to be,” he said. “It’s a shot. We get a flu shot every year. Same difference.”

Monday marked the first day for teachers in K-12 schools that wish to remain in or revert to an in-person learning model to receive a vaccine. Kroger Health, in partnership with 150 Franklin County schools, is set to vaccinate more than 15,000 educators and staff at locations in Hilliard and Reynoldsburg, according to a spokeswoman.

Gov. Mike DeWine prioritized teachers in the vaccine queue seeking to incentivize schools to reopen by March 1. He previously shared Ohio Department of Education data showing that 43% of schools are hosting full time in-person learning, about 33% are in a hybrid model, and about 24% are fully remote.

Outside the clinic, a group of roughly 15 activists held up a large banner to cars entering the school parking lot reading: “COVID-19 VACCINE EXEMPT FROM LIABILITY.”

The claim is true — federal law protects vaccine manufacturers from legal exposure in a public health emergency, which then U.S. Health and Human Services Secretary Alex Azar declared in early 2020.

Dorit Reiss, a law professor at the University of California Hastings, said the liability protection was passed to speed up the manufacturing of vaccines in a health crisis. She said anti-vaccine groups often take the truth and wield it out of context.

The activists also handed out a flier claiming vaccines are “not safe for everyone” and contain “objectionable ingredients.” It also accuses federal regulators of not allowing for adequate time to “thoroughly evaluate safety outcomes.”

A QR code on the flier links to the website of Health Freedom Ohio, an anti-vaccine political group. The group also advocates against masks and in support of a legislative effort to strip power from the Ohio Department of Health.

The vaccines came to market after FDA review of large scale clinical trials of people who took the Pfizer or Moderna vaccine. Measuring against a control group that unknowingly received a placebo, regulators gauge the effectiveness of the vaccine and review safety data from any adverse effects to determine the existence of a causal link.

The vaccines are each about 95% effective in preventing symptoms of infection.

Both sometimes come with unpleasant side effects, generally worse than the flu shot, like injection site pain, fatigue, headache, muscle or joint pain and chills.

However, there’s no evidence connecting either vaccine to any long-term health risk. The products are under ongoing scrutiny from the FDA and CDC via the Vaccine Adverse Event Reporting System.

The organizer of the protest, who would only identify herself as “Misti,” denied the activists were “anti-vaccine” or that they were protesting. She declined further comment.

“We’re not protesting anything,” she said. “We’re bringing awareness to it. People are getting hurt.”