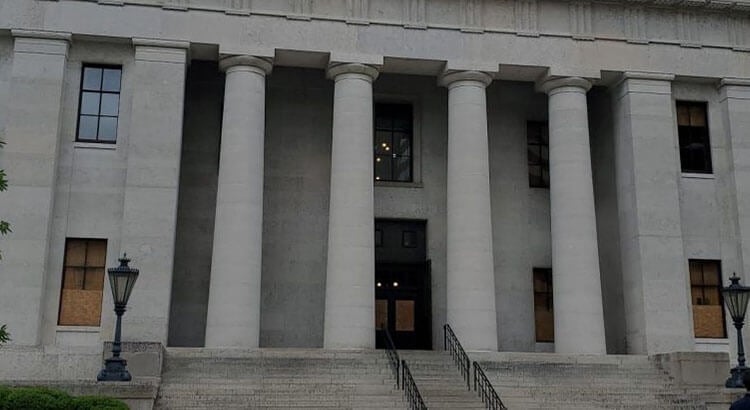 The Ohio Statehouse is pictured in late May with windows boarded up. Photo by Tyler Buchanan.
ShareTweet

A Republican state senator is seeking to increase the penalties for arson, vandalism and other criminal acts as a response to damage caused to the Ohio Statehouse and nearby businesses last year.

Brenner noted the “widespread property damage incurred by many downtown businesses, including our very own Statehouse, during the weeks and months of protests last spring and summer.”

Repairs from the Ohio Statehouse damages totaled $158,263, the Capital Square Review and Advisory Board (CSRAB) reported last summer. This included damage to windows, doors, pole lights and trash cans, as well as the cost to remove red handprints that were left on the granite and marble monuments.

When all the surrounding area’s property damage is included, the total damage well exceeded $1 million, The Columbus Dispatch reported.

SB 34 proposes $500,000 in spending for CSRAB to purchase and install 60 high-definition cameras with “new imaging software.” Brenner said the better technology could make “the difference between identifying a perpetrator and letting a rioter get away with damaging the people’s house.”

That funding would also go toward installing plexiglass for the lower level of the Statehouse building.

In his testimony to the Senate Judiciary Committee, Brenner said that “by increasing the penalties in these (criminal) sections, the goal of this legislation is to deter those who would commit such crimes.”

Sen. Cecil Thomas, D-Cincinnati, a former police officer, asked Brenner if he was aware of the “significant amount of research that clearly says that enhancing penalties is not a deterrent to crime.”

“I have seen some of the research. You’re correct,” Brenner replied. “However, I believe that the prosecutors need to have that option available, possibly to use it to help get some plea bargains of people to be able to identify others who may do damage in the future.”

Brenner is joined by five Republican cosponsors in support of the legislation.