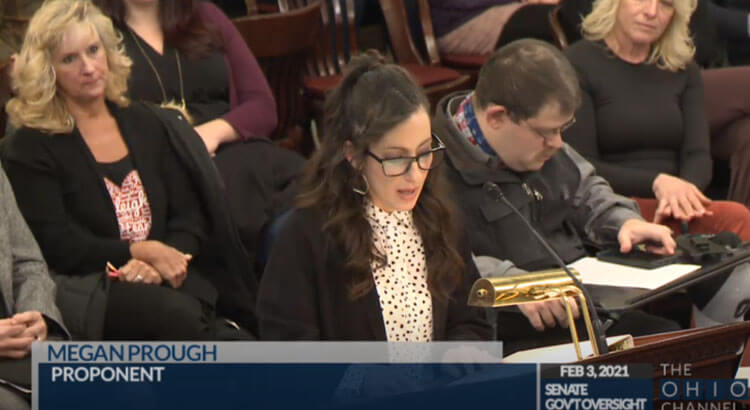 Lawmakers heard testimony in support of Senate Bill 22 on Wednesday, which would allow legislators to strike down health orders. Screenshot courtesy the Ohio Channel.
ShareTweet

Maskless and frustrated, a string of Ohioans offered tales Wednesday of their personal aggrievement since the coronavirus pandemic began.

A woman told of her favorite gluten-free bake shop closing down in 2020, thus denying her access to “cheesy bread with the best freshly made marinara sauce I’ve ever tasted.” She also claimed her cat died after being refused treatment during the initial stay-at-home order.

A seventh-grade student from Warren County complained about having to speak loudly during his school’s socially-distanced lunches. He described being annoyed by the overuse of hand sanitizer in school, which dampens his paperwork and has made dodgeballs tougher to grip during gym class.

A Cleveland native spoke about his past joy of listening to bands perform at a nearby venue from his apartment window, only for the performances to stop after the mayor issued a local mask mandate. (The man’s written testimony blames Gov. Mike DeWine’s “fear-mongering” for ending his marriage.)

Republican Sens. Rob McColley of Napoleon and Terry Johnson of McDermott first introduced Senate Bill 22 last week with a goal of allowing lawmakers to strike down state health orders. They offered a clear message: This was not legislation designed to target Gov. Mike DeWine and the state health department. It is instead the broader need for legislative oversight and the importance of checks and balances in government, they told colleagues.

Yet the bill’s first hearing to feature public testimony struck a much different tone. One by one, supporters of SB 22 gave pointed criticism of the governor and the Ohio Department of Health. They downplayed the deadliness of the virus and shared a string of falsehoods about its impacts.

Almost none of those inside the crowded hearing room wore masks, nor did several of their Republican allies on the committee.

Sen. Cecil Thomas, D-Cincinnati, left the hearing and said he felt safer watching it in his office.

“My daughter has a severely compromised immune system and I won’t sit there and put her health at risk,” he later tweeted.

Face masks are not required at the Ohio Statehouse for either lawmakers or visitors. Democrats have repeatedly called for a mask mandate, or for the legislature to conduct business through digital means. Republicans in the majority have rejected these proposals, including on Wednesday during an Ohio House floor session.

The committee hearing, ostensibly to consider a bill regarding executive and legislative authority, provided an open platform for anti-vaccine and anti-mask sentiments.

Among those who testified was Stephanie Stock, president of Ohio Advocates for Medical Freedom, a prominent anti-vaccine group. Stock took the opportunity to preemptively speak out against any theoretical requirements in the future that Ohioans be vaccinated to participate in society.

“(O)nce these new social constructs and technologies are in place, we will be a signature away from an unchecked Governor mandating vaccines for all,” she asserted.

In fact, Ohioans are not required to get the COVID-19 vaccine and DeWine has made clear he would not mandate getting vaccinated. The bulk of the unfounded claims made on Wednesday went unchallenged.

Little mention was made about the more than 11,000 Ohioans who have died from the virus over the past year or the nearly 47,000 who have been hospitalized to date.

Those testifying told instead about the other consequences of the pandemic, ranging from economic struggles to mental health issues — all problems in which their blame is placed squarely on the government’s mitigation efforts.

Interspersed were stories of frustration with pandemic life. Several complained about the difficulties faced by choosing not to wear masks. One such person, a small business owner who said he believes in “medical freedom,” described his daily errands as being “tedious and exhausting.”

“I no longer am able to just pop in and out of a store just to get an item or two,” he said. “Instead, I have to prepare myself mentally and physically to defend my reasons why I don’t wear a mask.”

Bill may or may not impact COVID-19 response, leader says

Senate Bill 22 is the latest effort by Ohio Republicans to target the authority of the Ohio Department of Health (ODH) to respond to the pandemic.

If enacted into law, SB 22 would create a new legislative committee with the power to strike down health department orders by a majority vote.

The entire chamber would also have the ability to rescind executive orders or an emergency declaration issued by the governor.

The bill would limit the executive branch in other ways, such as limiting an emergency declaration to 30 days unless the legislature extends it.

Senate President Matt Huffman, R-Lima, told reporters following Wednesday’s committee hearing that the proposed legislation is in response to nine months of “chaos” and “miscommunication.” He too described a need for the Ohio General Assembly to be more involved in the state’s handling of an ongoing crisis such as COVID-19.

Asked about the timeline of SB 22 — whether the goal would be to enact it in time to influence the current pandemic response — Huffman said he wasn’t yet sure.

It will depend, he noted, on how quickly the bill moves through the legislature over the coming months versus how long it takes for Ohio to get the pandemic under control.

Huffman also said the Ohio Senate would enforce stricter guidelines on the number of people allowed in a committee hearing room going forward.