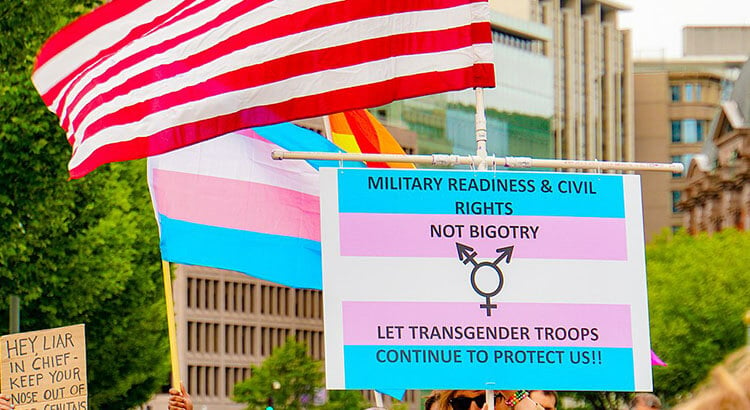 Second Lieutenant Kazper Lewis has known since the fifth grade that he wanted to serve in the military.

The Kent native’s father is a chaplain in the Army, but it was through the national organization Young Marines that Lewis learned “about leadership and challenging myself and others.”

He entered the U.S. Military Academy at West Point in 2016, where he grew in confidence and leadership, graduating in the Spring of 2020. He’s now at Fort Leonard Wood, Missouri, in the Army’s Engineer Basic Officer Leader Course.

“Overall, I still graduated and (was granted) commission, but it would have been great to be able to start my career off without my existence in question,” Lewis told the Capital Journal.

“I changed my name over my junior year, but didn’t try to change my gender marker or do anything officially because I knew it could negatively impact my chances of commissioning,” Lewis said. “March/April of 2019 solidified that, and I came out to the extent I could within the new policy.”

The 2019 policy, instituted by the Trump administration, disqualified transgender individuals with a diagnosis of gender dysphoria and those who required treatment like hormone medications or surgery, with some exceptions.

One of the exceptions was for active-duty military members who were diagnosed with dysphoria after June 30, 2016. That was when Ash Carter, Secretary of Defense under then-President Barack Obama, lifted an earlier ban on transgender service members.

At that time, Carter told reporters the change was needed because “the Defense Department and the military need to avail ourselves of all talent possible in order to remain what we are now — the finest fighting force the world has ever known.”

The National Center for Transgender Equality estimates more than 134,000 American military veterans are transgender, and of the active military, more than 15,000 are trans.

The Trump policy was initially blocked by lower courts, but in 2019, the U.S. Supreme Court, in a 5-4 decision, reinstated the order and allowed it to go forward.

In his first week as president, Joe Biden reinstated the Obama-era rules on transgender service members, but military members left to sit back and watch the policy twist and turn are tired of living on four-year cycles.

“It’s just become a political football in the last few years,’” said Jody Davis, who joined the Ohio National Guard when she was 17, years before she transitioned.

Davis became a nurse and a social worker after leaving the National Guard, but has attempted to re-enter military service in her capacity as a social worker multiple times. With the change in policy after she transitioned in 2014, she said she needed a waiver to work under the old policy, that said if she was born a man, she would have to serve as a man, including bunking with men and dressing in men’s uniforms.

“For the past couple of years, it’s been a notorious situation, and because of the trans ban, I was basically passed over,” Davis said.

In order to make sure others hoping to stay in the service or enter it anew can get in the door, Davis and Lewis say the solution can’t come from a see-sawing at the top of the federal government.

“The biggest impact has come from the back-and-forth on policy,” according to Lewis. “I want to be able to focus all of my energy on leading my soldiers the best I can, rather than be concerned about how my trans status could negatively affect my career.”

Davis said she is bolstered by comments made by the recently-confirmed Defense Secretary, General Lloyd Austin, in which he said he was focused on meeting military standards and maintaining rank numbers more than gender identification as a qualification to be in the military.

With someone they see as supportive of trans military service, Lewis and Davis say the decisions made by this administration need to be solidified in legislation as well.

“Service members deserve better,” Lewis said. “There shouldn’t be a thought in the back of our minds on whether our ability to serve is put into question every few years.”