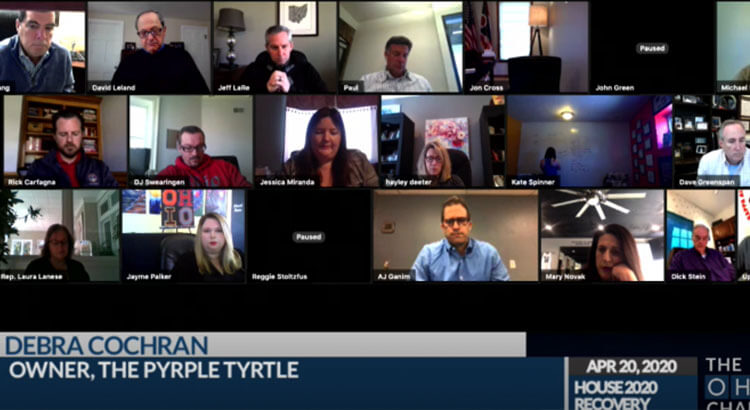 Members of the Economic Recovery Task Force are seen at a virtual meeting in April. A state representative wants to see the Ohio General Assembly allow for virtual committee hearings and testimony with the pandemic ongoing.
ShareTweet

When Ohio business owners were asked early on in the pandemic to share their concerns with lawmakers, they were given a chance to do so via Zoom video conference.

And when lawmakers on the Ohio Controlling Board hold regular meetings, they discuss budgetary issues with agency officials on a similar digital platform.

But ordinary Ohioans wanting to testify in favor and against proposed laws must still travel to the Ohio Statehouse in Columbus to be heard directly by their legislators.

A Democratic state representative is once again urging the Ohio General Assembly to allow for virtual committee hearings and testimony as the state continues to battle the COVID-19 pandemic. Rep. Brigid Kelly of Cincinnati introduced resolutions near the end of the previous legislative term seeking these rule changes. She announced plans to introduce them again with the 134th General Assembly kicking off this month.

“No one should have to choose between their health and wellbeing and having their voice heard,” she stated in a news release.

Dozens of advocacy organizations whose members often testify on legislation are similarly calling digital testimony going forward. While people can submit written testimony to committee members, testifying directly allows for questioning and extended dialogue on a given subject.

In a letter to House Speaker Bob Cupp, R-Lima, and Senate President Matt Huffman, R-Lima, the groups argue “our democracy works best when all of us are involved and when all of us have equitable access to it.”

The groups point to the coronavirus health concerns as well as broader challenges brought about by the pandemic. Parents and caregivers may not be able to travel to and from Columbus to have their voices heard, the letter contends.

“Ohioans balancing these increased demands of caregiving and family responsibilities can be met with insurmountable obstacles in having their voices heard at the Statehouse because they cannot partake in person,” the letter continues. “Additionally, the health and wellbeing of legislative and Statehouse staff and members of the press corps are at risk when there is an increase in the number of people with whom they come into contact at the Statehouse.”

Rep. Susan Manchester, R-Waynesfield, said during a committee hearing the bill’s passage was “imperative to the functionality and safety of state university boards and their trustees” during the “unprecedented times of the COVID-19 pandemic.”