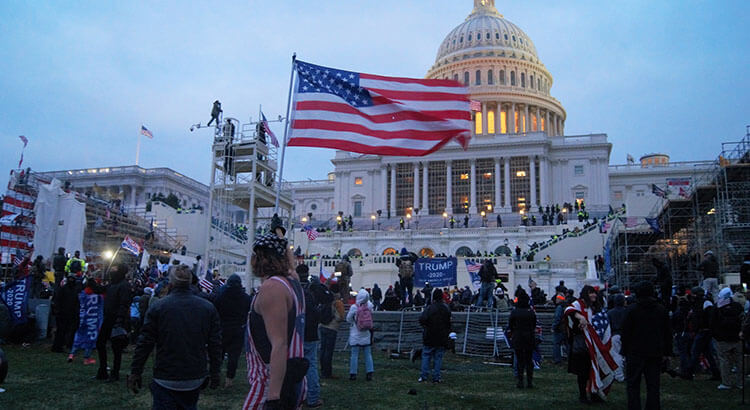 (Photo by Tyler Merbler via Flickr CC BY)
ShareTweet

How big a deal were last week’s events in Washington, D.C.?

We’re only beginning to get an idea of what happened, who participated and who might have organized the attack. So it seems like it’s going to be awhile before we can fix its place in history.

However, the violent raid on the U.S. Capitol has a number of historical antecedents, but aside from the Civil War, none even approaches the magnitude of the Donald Trump-inspired insurrection.

When thinking about the attack on the Capitol, it’s important not only to look at violence that killed five, injured scores of others and caused widespread damage. It’s important also to recognize the profound symbolism of the event.

The building that was attacked is the center of American democracy. It’s where our elected representatives come together in peace to pass the laws that govern us.

When the mob attacked the Capitol, it was using violence in an attempt to stop certification of a national election, the foundational act of our democracy. It’s the way power passes from one person to the next without war.

The symbols the rioters carried also were profound.

One hurled an American flag from a ledge at the Capitol and replaced it with a Trump flag. Another used a pole bearing an American flag to beat a police officer. And at least one man paraded through the august temple of American democracy with a Confederate flag — the symbol of an armed rebellion aimed at preserving slavery.

And those people were there because the American president sent them.

Compare that to rebellions past.

“The Reader’s Companion to American History” lists a number of uprisings before the Civil War.

One, Shays Rebellion of 1786 and 1787, happened as Western Massachusetts farmers groaned under heavy taxes to repay wealthy Bostonians who held Revolutionary War debt. When the state legislature ended its 1786 session without cutting those taxes or issuing more money, “armed bands closed the courts and prevented foreclosures, and a ragtag ‘army’ of some 1,200 disgruntled farmers under Daniel Shays, a destitute farmer and war veteran, advanced on the federal arsenal at Springfield, Mass., in January 1787,” according to “America, a Narrative History.”

They didn’t get far. A small militia scattered the force, killing four, and a short while later it was routed.

The reaction to the uprising rhymes in some ways with the events of today. In a letter to Thomas Jefferson, Abigail Adams seemed to be calling the Shaysites what some might now refer to as “deplorables.”

She called them “Ignorant, restless desperados, without conscience or principles… mobbish insurgents (who) are for sapping the foundation” of the feeble, young American government.

Then ambassador to France, Jefferson wrote back that he disagreed in a letter containing a quotation that has been used to justify subsequent uprisings.

“The tree of liberty must be refreshed from time to time by the blood of patriots and tyrants,” he wrote.

The unrest underscored the need for a stronger federal government and helped to spur ratification of the Constitution in September 1787. The power of that government was tested in 1794, when frontier farmers in several states became restive under Alexander Hamilton’s excise tax on strong drink.

To the farmers, it wasn’t just a sin tax. Roads and other infrastructure were so poor in western sections of states that for many, the only way to get their corn to market was to preserve it by distilling it into whiskey. And here the elites were, sitting back east and imposing a tax on western farmers from which they didn’t derive any benefit.

There was resistance from Georgia to Pennsylvania. Then in three counties of Western Pennsylvania, farmers — many of Scotts-Irish descent — went after tax collectors and payers.

“They blew up the stills of those who paid the tax, robbed the mails, stopped court proceedings and threatened an assault on Pittsburgh,” according to “America, a Narrative History.”

President George Washington knew the authority of the new federal government was being tested. He called up a militia force of 12,900, larger than any he previously commanded, and sent it west from Harrisburg and across the Alleghenies.

The “Whiskey Boys” melted away instead of fighting. The federal government thus burnished its power in the eyes of the public.

There were other rebellions.

The Hartford Convention of 1814 and 1815 discussed separating the New England states from the union because participants believed the region’s economic interests were being ignored by a federal government dominated by Virginians.

Andrew Jackson’s simultaneous victory in the Battle of New Orleans avenged the British attack on the Capitol a year earlier — and it whipped up so much nationalist sentiment that the convention was doomed.

There also was the Anti-Rent war in 1839 in New York’s Hudson Valley about feudal land laws and Rhode Island’s Dorr Rebellion in 1841-42 against disenfranchisement. Both led to eventual reforms.

Then, in the 1850s, a mini civil war over slavery broke out in Kansas, and in 1859 abolitionist John Brown mounted his raid on Harpers Ferry. Both were preludes to the Civil War, which began with an attack on Fort Sumter, S.C., on April 12, 1861.

After the war, there was violence associated with labor unrest, both by laborers and the forces that would keep them down. And the 1970s saw radical left-wing violence with bombings and kidnappings.

Late in the century, the radical right rose up, culminating in Timothy McVeigh, who in 1995 blew up an Oklahoma City federal building in 1995, killing 168.

Many more died in that attack than at the Capitol last week. But the latter event seems much more profound for a number of reasons.

For one, the Oklahoma City plot was limited to a small circle of deluded plotters. Last week, thousands were drawn to the Capitol as part of a conspiracy theory that has taken in millions: that Donald Trump was cheated out of a second term. Those millions include police officers, members of the armed forces and members of Congress, which itself was attacked.

But even more profoundly, it was an attempt by an American president to overthrow the electoral process. For months, Trump whipped up false claims of voter fraud and refused to commit to a peaceful transition of power. Then he pressured and threatened state officials to steal the election for him. When that failed, Trump called his followers to Washington and sent them to the Capitol in an attempt to stop Congress from certifying an election.

Contrast that to Washington.

There were no limits then to how many terms a president could serve, but in 1792 Washington had to be convinced to run for a second term. Tired and sick, one of his fears was that he would die in office.

That, he feared, would jeopardize a peaceful transition of power.