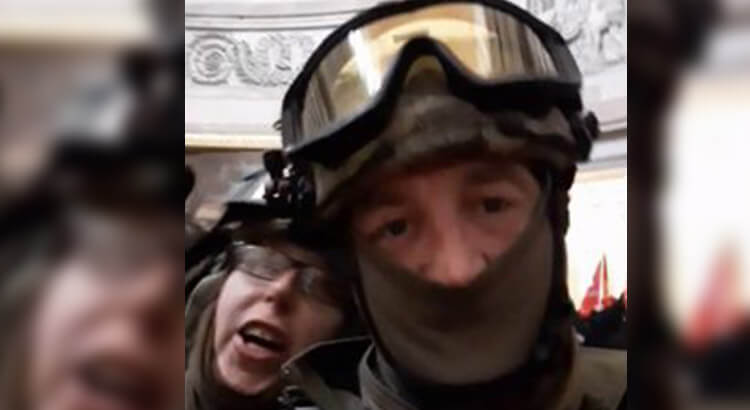 They, along with Thomas Caldwell, 65, of Virginia, are facing conspiracy charges, some of the most serious offenses of the more than 150 people who have been charged in connection with the violent raid on the U.S. Capitol Jan. 6.

Insurrectionists mobbed the building as Congress was in the process of certifying the results of the presidential election in a fruitless attempt to forcibly reverse the outcome. That same day, two pipe bombs were located at the Democratic and Republican party headquarters, mere blocks away.

At least 81 members of Capitol Police and 58 members of Washington D.C. Metropolitan police were assaulted that day, according to the U.S. Department of Justice.

Footage shows a range of violence between police and protesters ranging from hand-to-hand combat, protesters swinging melee-type weapons like hockey sticks and riot shields stolen from police, both sides deploying volleys of chemical spray, and more.

On Jan. 6, Crowl and Watkins donned reinforced vests, camouflage helmets, ballistic goggles and communications devices. They joined fellow members of their broader militia known as the Oath Keepers and formed a human train, as captured on video, slicing through a dense crowd up the stairs of the east side of the Capitol.

Just after 2:40 p.m., they “forcibly entered” the building, according to prosecutors, and pushed past a police officer who appeared to be trying to stop the crowd.

Caldwell and an unidentified individual meanwhile stormed past exterior barricades and positioned themselves on the Capitol’s west side balcony.

“Inside,” Caldwell wrote in a Facebook message at 3:05 p.m. to an unidentified recipient, according to prosecutors.

The indictment contains new details about the trio’s alleged coordination with fellow members of the Oath Keepers, a right-wing extremist group within the broader militia movement. Its members are predominantly police officers or veterans and often harbor antigovernmental views. Watkins has said she formed the militia in late 2019 and later fused it with the Oath Keepers.

Prosecutors say as early as Nov. 9, Watkins, 38, started soliciting recruits for an operation tied to the election.

She later described it as a “duty as Americans to fight, kill or die for our rights.”

Caldwell, who prosecutors say served in an unspecified leadership role within the Oath Keepers, suggested on Nov. 23 things would get violent no matter who becomes president.

“I believe we will have to get violent to stop this, especially the antifa maggots who are sure to come out en masse even if we get the Prez for 4 more years,” he texted Watkins, per prosecutors.

Antifa is shorthand for anti-fascist activists, a common boogeyman for the right wing.

In December, Crowl attended a “training camp” in North Carolina while Caldwell arranged hotel stays in Washington D.C. Watkins worked on seeing if “NC boys” are coming, according to prosecutors. Caldwell later said at least 40 people from North Carolina, maybe more from Mississippi were coming.

In an earlier filing, police said when they raided Watkins apartment, they found a printed recipe for plastic explosives, along with cell phones, “numerous” firearms, a paintball gun with rubber-steel balls, pool cues cut down to baton size, “zip/cable ties” and others.

The calls to violence, as prosecutors detail, are fairly explicit. Caldwell wrote on Facebook on New Year’s Day that he took an oath (he is a veteran) to support and defend the Constitution of the U.S. against enemies foreign and domestic.

“I did the former, I have done the latter peacefully but they have morphed into pure evil even blatantly rigging an election and paying off the political caste,” he wrote. “We must smite them and drive them down.”

Radio communications through the Zello walkie-talkie app, intercepted by reporters and published in The Guardian, captured Watkins and other militia members communicating in real time as they enter the building.

Her last communication, a recording of which prosecutors say they obtained as well, is candid.

“We are in the mezzanine, we are in the main building right now, we are rocking it,” she said. “They’re throwing grenades, they’re shooting people with paintballs, but we’re in here.”

An unknown male responds telling her to be safe, and states, “Get it, Jess. Do your f***ing thing. This is what we f***ing [unintelligible] up for. Everything we f***ing trained for,” according to a transcript of the recording within the charging documents.

After the raid, Caldwell messaged Crowl, suggesting they localize the insurrection.

“We need to do this at the local level. Let’s storm the Capitol in Ohio. Tell me when,” he wrote.

Prosecutors allege the trio soon attempted to cover their tracks. They say Caldwell on Jan. 8 began deleting Facebook communications about the event.

After the Ohio Capital Journal identified Watkins as an insurrectionist on Jan. 13 and The New Yorker identified Crowl as the same Jan. 14, the two left Ohio for Caldwell’s in Virginia. Caldwell, the indictment states, directed Crowl to conceal his travel and hide evidence of his involvement on the raid. 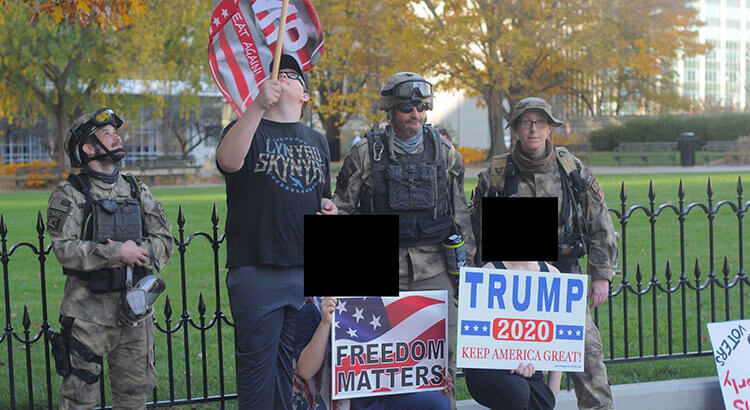 The Ohio State Regular Militia, before storming the U.S. capitol, appeared at the Ohio Statehouse in November after networks first projected Joe Biden won the election to “protect people,” according to Watkins. (Photo: Ohio Capital Journal)

In her only interview since the raid, Watkins said to this outlet she didn’t destroy any property or tussle with any police officers — which contradicts the prosecutors’ account. She admitted to entering the Capitol but denied having committed a crime.

“To me, it was the most beautiful thing I ever saw until we started hearing glass smash,” she said. “That’s when we knew things had gotten really bad.”

Along with conspiracy, the three face charges of obstructing an official proceeding, destroying government property, and entering a restricted building.

On Nov. 7, around the same time the militia allegedly began its planning, Watkins, Crowl and one other person appeared at the Ohio Statehouse to “protect people,” as Watkins said, during clashing protests that formed after the networks called the race for Biden.

The three have patrolled a dozen protests in Ohio and Kentucky prior to breaching the Capitol.

In response to a November inquiry, the Ohio Department of Homeland Security said Ohio law and the First Amendment to the U.S. Constitution protected the militia’s right to patrol the clashing protests.

Speaking to The Washington Post, Thomas Plofchan, a lawyer for Caldwell, said prosecutors were using his client as a scapegoat. He denied Caldwell’s involvement with the Oath Keepers and said his client is innocent.

Crowl confirmed to The New Yorker he entered the Capitol, claiming his intentions were peaceful and he had never been violent.

Attorney information for the three suspects was not available Thursday on the federal court docket and attempts to contact a court employee were unsuccessful.