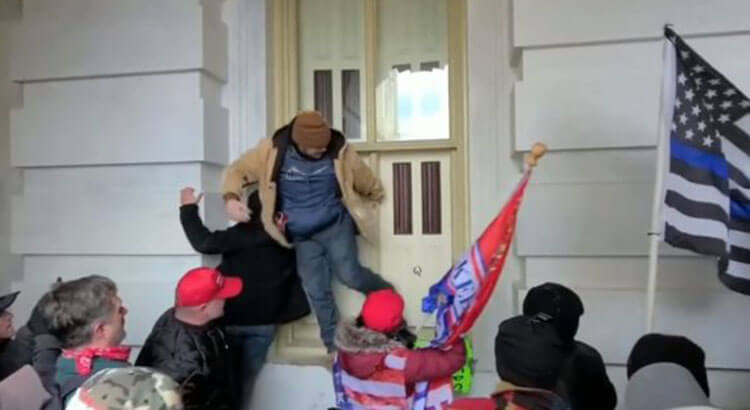 Troy Faulkner, seen in khaki jacket, kicks in a enforced, shuttered window at the U.S. Capitol in Washington D.C. during the insurrection Jan. 6.
ShareTweet

An Ohio man kicked in a reinforced window shutter at the U.S. Capitol during a seditious mob raid on Congress last week, footage shows.

Troy Faulkner can be clearly seen on the exterior of the Capitol in a “Faulkner Painting” sweatshirt bearing the company phone number. Footage shows him successfully kicking the shutter in after the first insurrectionist failed. The crowd responded with jubilance.

Shortly thereafter, a woman uses a Donald Trump flag to clear what’s left of the pane.

“Traitors! Traitors get guillotine,” one man yelled, referring to a machine infamously used during the French Revolution for beheadings.

The footage, later circulated in a “Showing Up for Racial Justice SE Ohio” Facebook page, underscores how ordinary people joined by the thousands for an extraordinary — and violent — uprising in protest to a free and fair democratic election.

The raid came after a “Stop the Steal” event, in which a series of speakers, including President Donald Trump, repeated the president’s lie that President-Elect Joe Biden won the election via widespread fraud.

There’s no evidence to support this claim which has been refuted in scores of lawsuits and denied by elections officials across the country from both major political parties.

The protesters sought to disrupt Congress as they voted to certify the results of the election. After the raid, Congress returned later in the evening to finish its work. Late the next morning, 147 Republican lawmakers voted to object to the certification including five Ohio congressmen.

Speaking via text messages, Faulkner said he didn’t plan on storming the Capitol when he travelled to Washington D.C. He said he was “shot in the chest by police” and “shrapnel hit my face” and he grew angry that police used tear gas to stave off the invaders. He said he didn’t know what police shot him with.

“It seemed the cops were antagonizing us and letting them straight into the building in the front so I believe it was all set up for the Trump people,” he said. “I knew I shouldn’t have kicked in the window. I was upset and wasn’t thinking rationally.”

Looking back on it, he said he just got caught up in the moment, and added he wasn’t part of any violence against police officers.

In 2012, Faulkner pleaded guilty to a felony charge of carrying a concealed weapon. After violating the terms of his supervised release, he was ordered to serve 14 months in prison in 2015.

At the Department of Justice’s first press conference Tuesday since the raid last week, officials said they have filed 70 people with crimes and opened 170 cases. They expect hundreds more. They said they plan to file a broad set of charges ranging from trespassing to property damage to theft of national intelligence to “sedition and conspiracy.”

Five people died Jan 6., including Brian Sicknick, a Capitol police officer who rioters reportedly struck in the head with a fire extinguisher, and Ashli Babbitt, a woman shot by police trying to breach a door within the Capitol. Dozens of police officers were injured in the raid.

The Washington Post reports rioters struck officers with bats, flagpoles, wrenches, and overpowered them at varying points with raw crowd power, pinning them against statues and walls.

This article was updated Thursday morning with information regarding Faulkner’s criminal history.