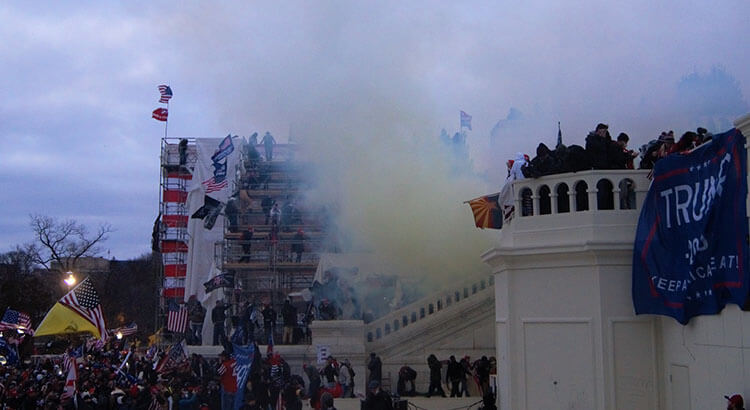 Tear gas is seen outside the United States Capitol during a violent attack by pro-Trump rioters on January 6, 2021. (Photo by Tyler Merbler via Flickr CC BY)
ShareTweet

We’ve been hearing a lot about accountability since the Trump-incited insurrection at the U.S. Capitol on Jan. 6. Who’s at fault for this historic attack on American democracy, and how can they be held responsible?

Most of us know who deserves the central blame. In an ABC News/Ipsos poll released on Sunday, 67 percent of Americans polled placed primary blame for the deadly riot at the Capitol on President Trump. Fifty-six percent said he should be removed from office before his Jan. 20 Inauguration.

Once you get past the president and the actual rioters, however, there’s no shortage of other bad actors who share culpability for the violent invasion of the seat of U.S. democracy. On top of Mike Flynn, Rudy Giuliani, Roger Stone and Don Trump Jr., this includes many Republican legislators, both federal and state, from Ohio and other states who have been parroting Trump’s lies about a “stolen election” since he lost convincingly on Nov. 6.

Several Ohio lawmakers continued their dangerous mendacity after the insurrection at the Capitol, suggesting without a shred of evidence that the always handy bogeyman of the right, Antifa, had infiltrated the riots on Jan. 6 and spurred them on. The FBI, among others, has stated that no evidence exists to suggest Antifa or other leftist militant involvement.

The idea that any self-respecting leftist provocateur would engage in such blatantly illegal activities, unmasked and in full public view — not to mention without concern about Covid-19 infection — was ludicrous from the start. Only true believers, acting in the thrall of passion — and assumed protection from their Dear Leader — would do something so incredibly reckless and dumb.

Nobody who watched the outrageous events of last Wednesday could have had any doubt about the sympathies of the mob. In a rally the morning of Jan. 6, Trump and his top henchmen urged them to march to the Capitol and they did. The president had been gleefully promoting the “wild” protest in Washington since before Christmas.

Four Republican Ohio House members — Kris Jordan of Ostrander, Jay Edwards of Nelsonville, Jon Cross of Kenton, and Gary Click of Vickery — posted remarks on social media after the Jan. 6 riot suggesting varying degrees of involvement by Antifa. While “condemning” the rioters themselves, they conspicuously avoided blaming the main responsible party, President Trump. That’s like condemning the slaughter of all your chickens without mentioning the fox.

Three of these same four Ohio House members (the fourth, Rep. Click, just took office) joined 39 other House Republicans in signing a Dec. 10 letter asking Ohio Attorney General Dave Yost to add Ohio to the infamous Texas lawsuit seeking to overturn the results of the Nov. 6 presidential election in four key swing states. That doomed legal effort, along with several dozen others, failed to persuade courts across the country of any widespread election fraud that would have changed the election results showing a convincing victory for Joe Biden.

In a similar and no less outrageous effort to keep alive the election fraud fiction, five Republican members of Congress from Ohio on Jan. 6 voted to object to the certification of Electoral College counts that went for Biden. Their late-night votes came within hours of the violent Trump-incited mob breaking into the Capitol and driving members of Congress and staff members into hiding, in fear of their lives. Some made no secret of their intent — to track down and hurt or kill congressional leaders and members. “Hang Pence” was one of the chants that day. Five people died, including a Capitol Police officer.

Those members of the GOP congressional delegation from Ohio are Reps. Bill Johnson of Marietta, Bob Gibbs of Lakeville, Steve Chabot of Westwood, Warren Davidson of Troy, and Jim Jordan of Urbana. All five voted against counting Pennsylvania’s Electoral College votes, an objection that failed 282-138. All except Chabot voted the same way regarding Arizona’s electoral votes, which failed 303-138.

While the election-fraud arguments had a veneer of high-minded righteousness — one person, one vote, count only legal votes, not illegal votes — they fell apart like soggy toilet paper when examined by state election officials and the courts. State officials from both parties came under intense personal pressure, including death threats, for doing their constitutional duty and abiding by the law.

However, the persistence of radical Republican legislators in Ohio and other states in keeping alive the dishonest narrative that Trump’s victory had been stolen not surprisingly bore a violent and deadly fruit Jan. 6 at the U.S. Capitol. Reports are rife on social media platforms that more Trump-inspired terrorist attacks are planned for before or during the Jan. 20 Inauguration of Joe Biden.

Those who have continued to provide oxygen to the easily disprovable lie of a stolen election share culpability in the sedition that animated the insurrection in Washington last Wednesday. In Ohio, that includes Republican U.S. Reps. Johnson, Gibbs, Jordan, Davidson and Chabot, and the 42 Ohio House Republicans who pushed the bogus Texas lawsuit, including those who lied about Antifa — Edwards, Jordan and Cross.

All of these lawmakers have blood on their hands.

FOR ME, A MAJOR IRONY RUNS through this past week. Since the election, as Trump and his cronies continued active efforts to subvert the will of the American people, I had thought about my own response if they succeeded in overturning Joe Biden’s victory. If that had happened, with Trump extinguishing democracy to bludgeon his way into a second term, a breathtaking victory of fascism over the people’s will, I’d have been among those angrily marching on the U.S. Capitol or Ohio Statehouse. I’d have considered joining any effort — lawful or otherwise — to revolt against an illegitimate federal government empowered by a coup. Any other response would be a stain on the memories of all of those hundreds of thousands of American patriots who have died in every war since the American Revolution.

See, bombastic love-my-country proclamations aren’t just the province of right-wing flag-wavers. But when they’re based on justifiable fears of losing the democratic underpinnings of this country, they’re not the least bit hypocritical.

Pretending to fight for patriotism in a cause that’s profoundly anti-democratic and based on lies is not the same as defending the American Republic from the greatest threat to democracy since the Civil War. Basing your actions on hateful myths floating around social media or wild fabrications tweeted by the biggest liar in modern history is not the same as finding truth in well-sourced news stories reported by professional journalists in credible news outlets.

And playing the brave patriot role when you’re actually motivated by fear that a deranged and vindictive president will ruin your political future is nothing less than cowardice.

The insurrection in Washington on Jan. 6 could not have happened without the poisonous lie that Trump’s election win had been stolen. Those in positions of power in Ohio and other states who repeated and amplified that lie share responsibility for those unforgettable events. They ought to pay for that.

Terry Smith in May left The Athens NEWS in Athens, Ohio, after editing that award-winning publication for 34 years. His columns and editorials have placed first in the Ohio New Media Association’s annual weekly newspaper awards in recent years. Before returning to Athens and his alma mater, Ohio University, in 1986, Smith reported for newspapers in Ohio, Arizona, Idaho, Colorado and West Virginia. He is currently freelance editing and writing from his home in Athens.