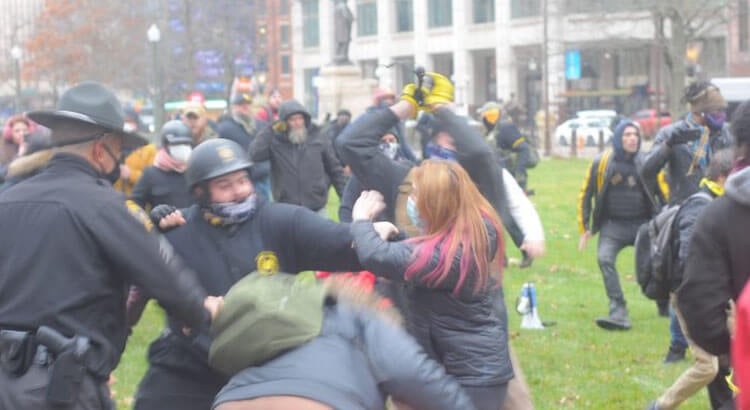 Clashing protesters brawl for the second time on Wednesday, Jan. 6, 2021 on the Ohio statehouse campus. A man in Proud Boys gear winds up a punch with his right fist clenched. Photo by Jake Zuckerman
ShareTweet

As he called up the National Guard Tuesday to prepare for a possible attack on the Statehouse, Ohio Gov. Mike DeWine on Tuesday said he didn’t anticipate President Donald Trump’s unprecedented attack on a peaceful transition of power.

DeWine said he was activating 500 members of the Ohio Guard to protect the Statehouse and the U.S. Capitol amid threats that Sunday and the Jan. 20 inauguration could see a reprise of last Wednesday’s calamity.

That’s when Trump incited a mob to attack the Capitol as Vice President Mike Pence and Congress were inside, certifying an election that Trump lost. Five people died, including a police officer.

DeWine said he would activate more members of the Guard if its commander recommends it or if Ohio mayors request a Guard presence in their cities. It “would certainly be our worst fear,” if Capitol Square in Columbus comes to resemble the scene in D.C. last week, the governor said.

In the wake of the carnage, the governor called out Trump more forcefully than he has in the past, last week saying Trump “started a fire that has threatened to burn down our democracy.”

Trump told the press on Tuesday that he bore no responsibility for last week’s mob, which he summoned to the Capitol. Many were white supremacists and some appeared to be bent on kidnapping and killing Pence and House Speaker Nancy Pelosi. In his way, Trump also seemed to be threatening further violence.

For DeWine, Trump’s conduct over the past six days seemed to come as a surprise.

The governor was confronted with the fact that in September he was asked whether he condemned Trump’s refusal to commit to a peaceful transfer of power if he lost the election. At the time, DeWine said, “I don’t condemn anything. I don’t know what’s in his heart or in his mind.”

On Tuesday, DeWine tried to explain why he didn’t foresee the past week’s events.

“The system works and our method of electing a president and a peaceful transfer of power… I’ve had no experience in my life with that peaceful transition of power where it didn’t work,” he said. “So forgive me if I assumed that what we have done for over 200 years we’re going to be able to do in this election.”

More generally, DeWine — Trump’s Ohio co-chair — seemed sensitive to implications that he and other Republicans enabled a Trump presidency that now is imploding so spectacularly.

DeWine interrupted a question about that and said, “I’m the governor of the state of Ohio. I’ve got a lot to do here. We’re focused on the pandemic. We’re focused on making this the year of recovery in Ohio and I don’t think that it’s my obligation to stand up every single time the president says something. I have made it very clear that I trust in our institutions.”